"If that 129.2 degrees reading [in Ahvaz] is accurate, it would arguably tie the hottest temperature ever measured on Earth in modern times."

"In the Persian Gulf city of Jask, Iran, about 800 miles southeast of Ahvaz, the humidity was even more suffocating. The dew point on Wednesday morning hit 91.4 degrees. Dew points above 90 are quite rare."


On Thursday, June 29, the temperature reached 129.2 degrees (53.8C) in the southwestern city of Ahvaz, Iran. The temperature was the hottest in Asia since global temperature recording began in the 1880s. It beat out the 128F temperature in Turbat, Pakistan recorded weeks earlier on May 28, which was among the regions that had set a new world record. Doyle Rice at USA Today reported in part yesterday:

[In Ahvaz] The heat index, which also takes humidity into account, hit an incredible 142 degrees.

Fortunately, the weather forecast for Ahvaz on Friday is for "cooler" weather, with a high of only 119 degrees, according to AccuWeather.

The following temperature map, put together by Etienne Kapikian, a meteorologist with the French national weather service, was published at Kapikian's Twitter page before temperatures in Iran reached their zenith yesterday according to Weather Underground readings. However, I'm posting the map to show the massive temperature spike in a particular region of Iran/Iraq.

Why was that one region so much hotter than nearby ones? I don't know. The Washington Post report, below, only mentions that a heat dome had settled over the Middle East. Maybe significant differences in topography would explain it?

There were two other record-breaking weather events recorded in the Middle East in June -- lowest humidity and hottest overnight low temperature. See the Weather Underground report after the WaPo one. 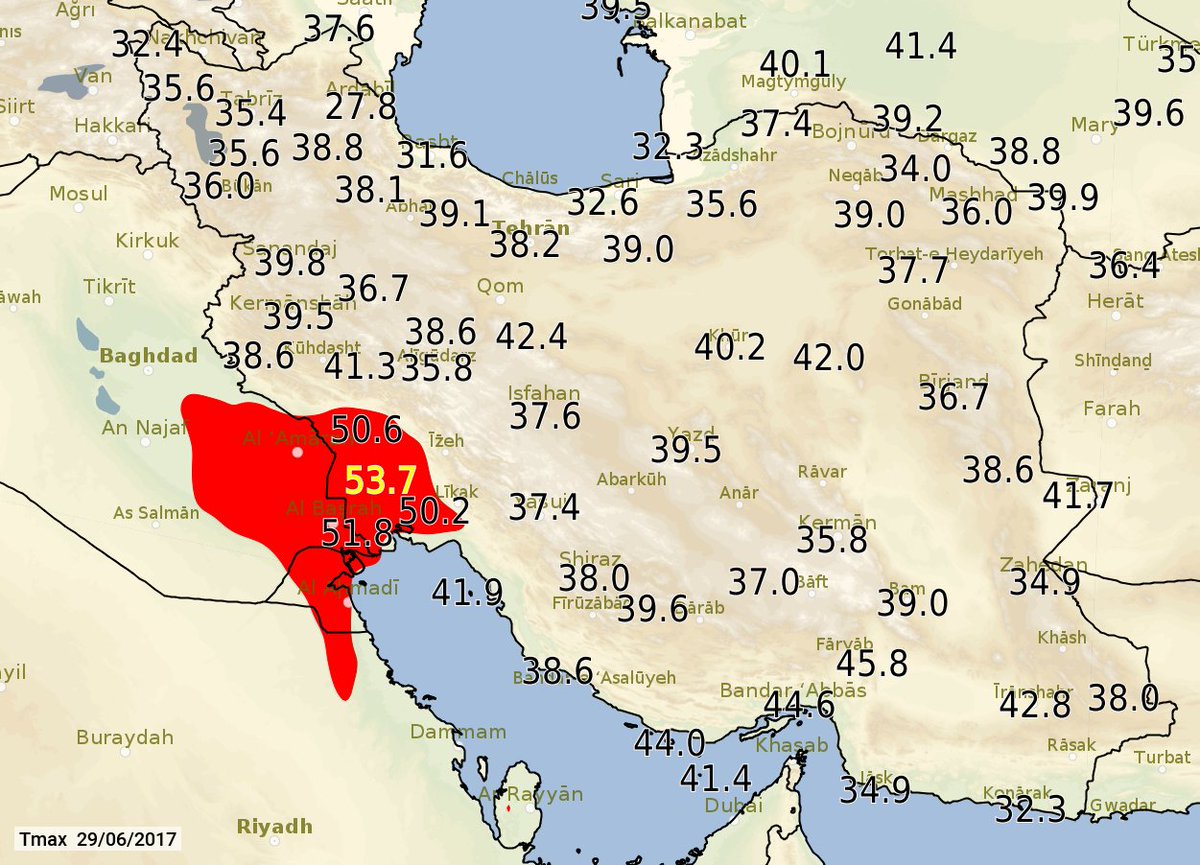 Iranian city soars to record 129 degrees: Near hottest on Earth in modern measurements
By Jason Samenow
June 29 at 3:07 PM
The Washington Post

Officially, Death Valley set the record for the hottest temperature ever recorded on Earth on July 10, 1913, soaring to 134 degrees (57 Celsius). But Burt posted a devastating critique of that measurement in October 2016, concluding it was “essentially not possible from a meteorological perspective,” and that the weather observer committed errors.
For the 129.2 degree-reading Ahvaz posted on Weather Underground to stand and match the highest modern global temperature, it will require review by the World Meteorological Organization.
The scorching temperature reading was brought about by a dome of heat centered over the Middle East.
The excessively hot air over Ahvaz, a city of 1.1 million people, felt even more stifling due to high humidity. As the temperature climbed into the high 120s, the dew point, a measure of humidity, peaked in the low 70s; a high level for the desert location (due to air flow from the Persian Gulf, to the south). The heat index — a measure of how hot it feels factoring in the humidity — exceeded 140 degrees. This combination of heat and humidity was so extreme that it was beyond levels the heat index was designed to compute.
In the Persian Gulf city of Jask, Iran, about 800 miles southeast of Ahvaz, the humidity was even more suffocating. The dew point on Wednesday morning hit 91.4 degrees. Dew points above 90 are quite rare. The highest dew point ever measured on Earth is 95 degrees (35 Celsius), set at Dhahran, Saudi Arabia, on July 8, 2003.
Thursday marked the second straight day of record heat in Ahvaz. On Wednesday, it hit 127.2 degrees (52.9 Celsius), breaking the record for Iran’s hottest June temperature, only to be exceeded the next day.
These Iranian temperature extremes come just a month after several locations in the Middle East recorded their hottest May temperatures during another exceptional heat wave.
On May 28, the western Pakistani town of Turbat hit 128.3 degrees (53.5 Celsius), tying the all-time highest temperature in that country and the world record temperature for May, according to Weather Underground meteorologist Jeff Masters.
At the same time Masters reported that at the military base of Konarak in eastern Iran, the temperature reached 127 degrees, “destroying the record of the highest temperature ever recorded in May in Iran (50.5°C in Bostan in May 1999).”
All of these record-breaking temperatures in recent years, including Thursday’s reading in Ahvaz as well as those set in Kuwait and Death Valley in 2016 and 2013, represent temperature extremes consistent with what climate scientists expect to see in a warming world.
The National Academy of Sciences published a report in 2016 that said worsening heat waves are among the weather events that can be most easily connected to human-caused climate change.
A study published in the journal Nature Climate Change in 2015 cautioned that by the end of the century, due to climate change, temperatures in the Middle East may become too hot for human survival.

Jason Samenow is the Washington Post’s weather editor and Capital Weather Gang's chief meteorologist. He earned a master's degree in atmospheric science, and spent 10 years as a climate change science analyst for the U.S. government. He holds the Digital Seal of Approval from the National Weather Association.

I asked weather records expert Maximiliano Herrera about the reading, and he stated that he confirmed the validity of the reading with Iranian meteorologist Sabit Siddiqi. This was the lowest humidity in world recorded history that Herrera was aware of; the previous lowest humidity he knew of was in Las Vegas, Nevada: a 0.6% reading on June 27, 2011.

He gave credit to Georgian climatologist Evgeny Gavrilov for calling his attention to the new Iranian low humidity event.

However, Steven D. Hilberg, Senior Climatologist for the U.S. Midwestern Climate Center, wrote me this morning to tell me that on May 4, 2014, Needles, California hit 102°F (38.9°C) with a -36°F (-38°C) dewpoint, which works out to a relative humidity of 0.33%. Given that we can't really measure humidity to a precision of hundreths of a percent, the two readings are pretty much tied for the lowest humidity record. If anyone finds a similar or lower value, please let me know!

Needles, California made another respectable run at the world record for lowest humidity at 12:56 pm PDT, on Wednesday, June 21, 2017, when the temperature hit 119°F (48°C) with a -11°F (-24°C ) dewpoint, for a relative humidity of 0.8%. The preliminary high temperature in Needles on Wednesday topped out at a relatively cool 122°F. The previous day, June 20, 2017, Needles tied their all-time hottest temperature on record: 125°F. We’ll have more on the record-smashing Southwest U.S. heat wave in a post later this week.
World record hottest overnight low temperature: 111°F in Oman on June 17

As we reported on Monday, it’s been a remarkable few weeks for heat in the Middle East and Southwest Asia, with three nations—Pakistan, Oman and the United Arab Emirates—setting their all-time hottest temperature records between May 28 and June 16, 2017.

To add to the list of extraordinary recent heat events there, we now have a world record for hottest overnight low temperature: a minimum temperature of 111.6°F (44.2°C) recorded on the morning of June 17, 2017 at Khasab, Oman, located on the Persian Gulf.

According to Herrera, the incredible overnight heat was made possible by a strong foehn wind that was blowing downslope from a mountain that Khasab sits at the base of. Descending winds heat up the air by compression as it is forced downward, and many all-time record warm temperatures are set during foehn events.

Dr. Jeff Masters co-founded Weather Underground in 1995, and flew with the NOAA Hurricane Hunters from 1986-1990.