Is Mrs May preparing to throw Brexit under the bus?

When in doubt look busy 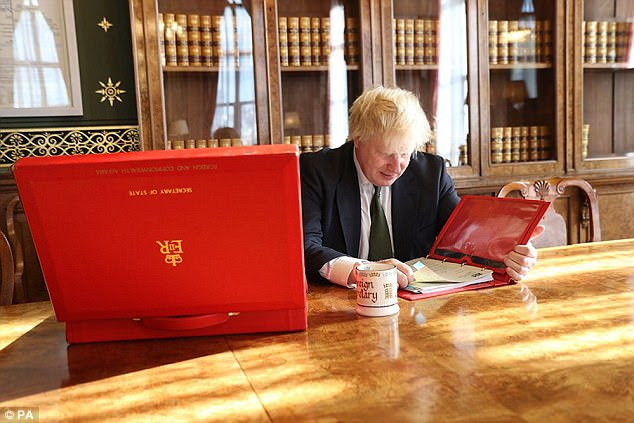 Lord Mandelson also enters the debate today by calling for MPs who backed staying in the EU to use Mrs May’s political weakness as an opportunity to put pressure on her to keep the UK in the single market and customs union. ... "I believe if [Mrs May] shows flexibility most of the country will back her. It would be churlish for people like me and other Remainers not to give her political backing. ..."

The political paralysis caused by the Election is widely believed to have strengthened the hand of pro-EU MPs who support a ‘soft’ Brexit, in which the UK retains access to the tariff-free single market and customs union. This approach is backed by 47 per cent of voters, compared with 36 per cent who want a ‘hard’ Brexit.

The above quotes and following ones are from the Daily Mail report, June 10, Boris bids to be PM: Johnson team circles wounded Theresa May as she's forced to sacrifice key aides to keep her job as Tory leader:


The resignations of her closest aides leaves Mrs May an even more isolated figure. The ‘cabal’ which took most decisions consisted of her, her husband Philip, Mr Timothy and Ms Hill – with her Cabinet left out in the cold.

Craig Oliver, who was David Cameron’s director of communications, welcomed the departure of the aides. In an article for today’s Mail on Sunday, he demands to know how ‘the Conservative party allowed these two people with such questionable judgment to influence so much and get it so wrong?’

And Katie Perrior, who worked with Mr Timothy and Ms Hill as Theresa May’s director of communications until the Election, said the two aides were the reason that No 10 ‘bloody well stank’ of ‘arrogance’.

Tory peer Lord Heseltine added to the chorus of criticism, using an article in The Mail on Sunday to describe the Election as ‘an unusually poor campaign, crippled by the reverse over what has been branded the “dementia tax” and some unwise sloganeering.’

Tory MP Nigel Evans was even more scathing, describing the Conservative manifesto as ‘full of poison from beginning to end’.

He said: ‘It was mean-spirited in trying to take school lunches off youngsters, it was irrelevant in trying to bring back fox-hunting and it was a full-frontal assault on our core support which was the elderly. The only thing that was missing from the manifesto was compulsory euthanasia for the over-70s.’

Tory grandee Lord Tebbit was withering too, saying: ‘The idea of this Election had been conceived by Mr and Mrs May and two or three close advisers who know very little. They then elected to have a campaign of well over seven weeks. Madness. Because if you are ahead at the beginning, as all the polls indicated, the only thing that can happen during those seven weeks is that things get worse.’

Lord Mandelson also enters the debate today by calling for MPs who backed staying in the EU to use Mrs May’s political weakness as an opportunity to put pressure on her to keep the UK in the single market and customs union.

The former Labour Minister uses an article in this newspaper to hint at an alliance between moderates, saying that ‘new parliamentary arithmetic’ should be used to out-manoeuvre the ‘headbangers’ who want to cut most ties with Brussels.

He says: ‘I believe if [Mrs May] shows flexibility, most of the country will back her. It would be churlish for people like me and other Remainers not to give her political backing. There are Labour MPs who want to work in the national interest and will support her if she does the right thing.’

As to what the Mail has to say about Boris at this delicate juncture in British politics:


Boris Johnson is preparing a new bid to become Prime Minister as Theresa May’s grip on No 10 becomes increasingly fragile.

A close ally of the Foreign Secretary said last night it was ‘go-go-go’ for Mr Johnson’s leadership push, adding: ‘We need Bojo. We need a Brexiteer. We need somebody who can talk and connect with people like Jeremy Corbyn does. We need someone who can make Britain believe in itself again.’

Mr Johnson’s supporters are being careful to say that he will not take any action while Mrs May remains in No 10 – but the fact that his allies are actively briefing about his virtues will be seen in Downing Street as destabilising.

Talk of his leadership bid came as Mrs May was rocked by the resignations of the two Downing Street advisers who have been blamed for the Election disaster – and a Mail on Sunday poll which found that half of voters want her to quit.

Such is the febrile atmosphere that The Mail on Sunday was even told that allies of Mr Johnson believe he has secured the support of Michael Gove. But friends of Mr Gove – who was Mr Johnson’s rival for the leadership in last year’s contest – dispute this.

As to Mrs May's chance at staying in power:


The MoS Survation poll found that 49 per cent of all voters want Mrs May to resign, with only 38 per cent wanting her to stay put. And out of the contenders to replace her [Boris] Johnson outscores his nearest rival, Chancellor Philip Hammond, by a margin of more than two to one.

A separate survey of Tory supporters by the Conservative Home website found that two-thirds wanted Mrs May to announce her resignation immediately.

Few Tory MPs believe that Mrs May will still be in No 10 by the end of the summer after losing 13 Tory seats – squandering the party’s previous working majority of 12.

There's plenty more in the Mail's report about how the election results are shaking out.