See the New York Times report below the Weather Channel excerpt for information on how a storm surge from a reformed Harvey could specifically affect New Orleans, half of which is situated below sea level, and how city officials are responding.

While the city is not in the bull's eye at this time the big concern is that Harvey, even if it doesn't become a hurricane, could stay out to sea for days and 'churn' with high winds, causing storm surges (with impacts like a tsunami) resulting in massive flooding along parts of the Texas and Louisiana coasts -- which could extend as far east as New Orleans.

The concern is great enough that for the first time the National Hurricane Center has issued a storm surge watch for the public (see the Weather Channel report). It's the prospect of just this kind of situation that's had so many people upset about the laxity of New Orleans officials in addressing the city's perennial drainage problems. The laxity didn't come to public light until a turbine that powered most of the city's drainage pumps failed during flooding in the city in early August, setting off a chain reaction of discoveries.

Yet before the discoveries at least one of the officials had the gall to tell residents that the flooding was due to climate change!

Harvey has redeveloped into a tropical depression in the western Gulf of Mexico.
It will track toward the Texas Gulf Coast by Friday.
Harvey may strengthen to a hurricane before landfall.
Harvey may then stall or meander for a few days, leading to a dangerous flood threat in parts of Texas and Louisiana.
Hurricane, tropical storm and storm surge watches have been issued for parts of Texas.

Harvey has reformed into a tropical depression and is likely to strengthen into a tropical storm or hurricane before bringing a dangerous combination of rainfall and storm surge flooding to areas near the Texas and Louisiana coasts into the weekend or early next week.
(MORE: Hurricane Central)
A Hurricane Hunter aircraft investigating Harvey found a well-defined low-pressure center Wednesday morning with wind speeds below tropical storm strength. Therefore, the National Hurricane Center has begun to issue advisories on Harvey once again.
The NHC says that the center of Harvey is located about 470 miles southeast of Port Mansfield, Texas, and is moving northwest at 9 mph.
[...]  [Lots more in the report] 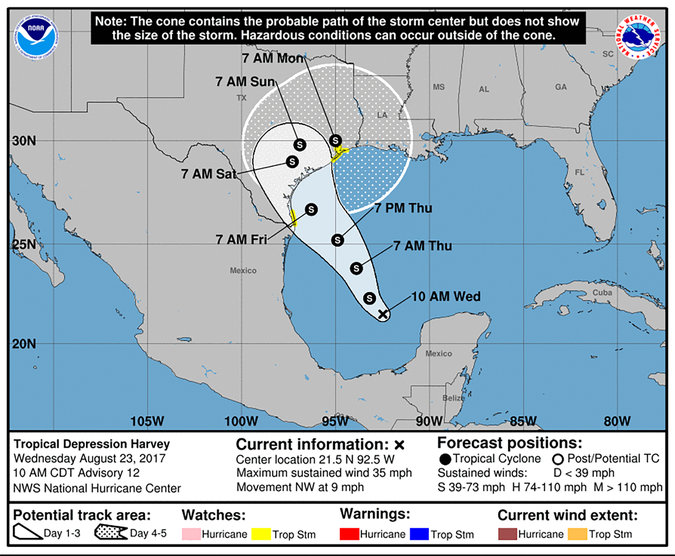 The remnants of Tropical Storm Harvey gained strength in the Gulf of Mexico on Wednesday, prompting tropical storm and hurricane watches for heavy rains, strong winds and flooding that could threaten the Gulf Coast over the next 48 hours, forecasters said.
The National Hurricane Center had said the storm could make landfall, affecting the cities of Corpus Christi, Tex., Houston and New Orleans, among others.
The center updated its advisories on Wednesday, saying hurricane conditions were possible by Friday for coastal areas from Port Mansfield, Tex., northeast to San Luis Pass, which is 25 miles southwest of Galveston, Tex.
Tropical storm and storm surge watches were in effect from the mouth of the Rio Grande to Port Mansfield, and from San Luis Pass to 60 miles northeast to High Island, Tex., it said. A life-threatening storm surge was possible from rising water moving inland along the coastline, the
The center said in a statement on Tuesday that a concern would be if the system stalled after making landfall. That could mean a prolonged period of heavy rainfall and flooding across portions of Texas, Southwestern Louisiana and northeastern Mexico stretching into early next week.
“The hurricane hunter plane is in the area now and trying to find whether there are tropical storm force winds, but it looks like it is getting its act together,” Dennis Feltgen, a spokesman for the center, said in an interview on Wednesday morning.
Also on Wednesday, the Mexican government issued a tropical storm watch from Boca De Catan to the mouth of the Rio Grande.
The outlook for Southwestern Louisiana was less clear. The center said the authorities would monitor the storm’s progress.
Tropical Storm Harvey battered several islands in the eastern Caribbean last week with torrential rain and strong winds before dissipating.
If the storm were to reach New Orleans, the impact could be particularly troubling. The city is still recovering from flooding this month after a severe thunderstorm made much of the city impassable because a turbine that powered the majority of the city’s pumping systems failed on Aug. 9.
The turbine was fixed and back in service, New Orleans said on its website, adding that the city would be able to “handle typical rainfall.” The East Bank of New Orleans remained “at risk in the event of a major rainstorm until additional turbines are brought back online,” the city said.
Margaret Orr, the chief meteorologist at the television station WDSU in New Orleans, said on Twitter she was “very concerned” about the potential for heavy rain should Harvey strengthen and approach the city’s shoreline.
In a news conference on Tuesday, Mayor Mitch Landrieu of New Orleans said his administration had considered possibilities that might prompt evacuations, but officials had not decided on a rainfall threshold that would lead to such a decision.
Government forecasters had predicted a busy 2017 hurricane season. The Climate Prediction Center, a division of NOAA, predicted the busiest hurricane season since 2010, with 14 to 19 named storms, including five to nine hurricanes.