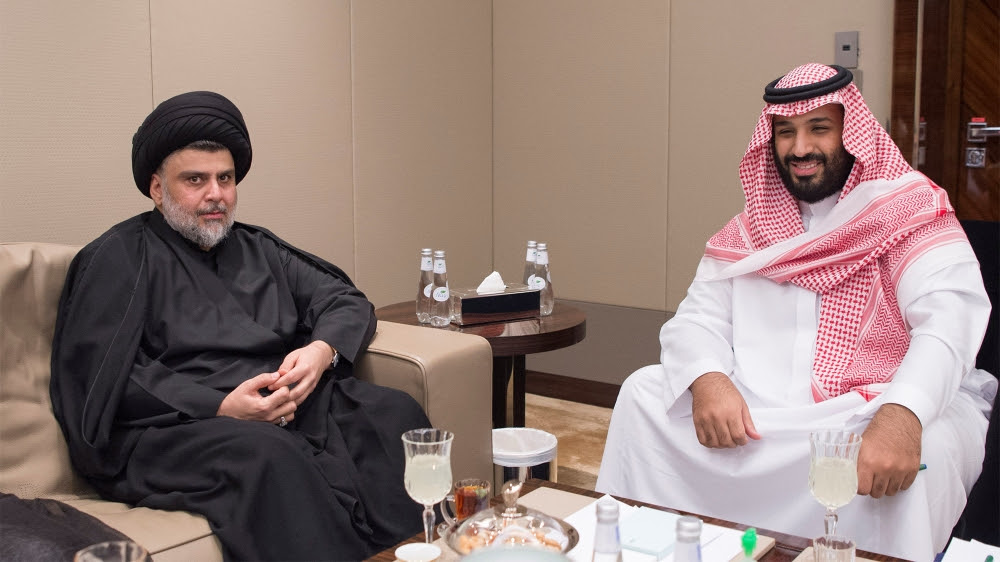 Iraqi PM asked to lead Saudi mediation with Iran, which has welcomed the initiative, according to Iraqi TV station.
Al Jazeera
August 14, 2017


The government of Saudi Arabia has sought the help of Iraq's prime minister to mend relations between Riyadh and Tehran, according to news reports.
Citing Qasim al-Araji, Iraq's interior minister, the Iraqi satellite channel Alghadeer reported that Mohammed bin Salman, the crown prince of Saudi Arabia, has asked Haider al-Abadi to lead the mediation with Iran.
"During our visit to Saudi Arabia, they also asked us to do so, and we said that to [the] Iranian side. The Iranian side looked at this demand positively," Araji was quoted saying by Alghadeer on Sunday.
"After the victories that Iraq has achieved, it [Saudi Arabia] began looking to Iraq, at its true size and leading role.
"The calm and stability and the return of relations between Iran and Saudi Arabia have positive repercussions on the region as a whole."
OPINION: Saudi Arabia and Iran and how we got here
Araji visited the Iranian capital, Tehran, on Saturday to discuss "several issues" with top Iranian officials, according to reports. He also visited Saudi Arabia in July.
The Iranian news agency ISNA quoted Araji in Farsi as saying that Mohammed bin Salman wanted to "ease tensions" with Iran.
Separately, Muqtada al-Sadr, the influential Iraqi Shia leader, announced on his website that he would be visiting the UAE on Sunday.
In July, Sadr made a rare visit to Saudi Arabia, where he met Mohammed bin Salman and other officials.
Sadr, an anti-American figure, commands a large following among the urban poor of Baghdad and the southern cities, including Saraya al-Salam, or Peace Brigades armed group.
He is now seen as a nationalist who has repeatedly called for protests against corruption in the Iraqi government, and his supporters have staged huge protests in Baghdad calling for electoral reform.

The visits by the Iraqis come as the Arab Gulf region remains embroiled in its worst crisis in years - a dispute between Qatar and a Saudi-led bloc comprising the UAE, Bahrain and Egypt.
Speaking to Al Jazeera on Sunday, Saad Jawad, a political science professor at the London School of Economics, termed the Saudi-Iraqi diplomatic moves "odd".
"If Saudi Arabia is [in a dispute] with Qatar about Qatar's relationship with Iran ... how could they ask the Iraqis to amend their relations with Iran?
"The Saudis know very well that Iraq is a little bit biased in [its] relations with the Iranians, and they are under the influence of the Iranians."
Jawad said Saudi Arabia could have asked a more neutral broker like Kuwait or Oman, both of which have "good relations" with Iran.
For Reza Khaasteh, a journalist for the Tehran-based Iran Front Page website, the offer is a "sincere move" by Riyadh given the recent "signals exchanged betweent the two sides".
Khaasteh pointed out that ahead of the announcement on Sunday, Saudi Arabia's Foreign Minister Adel al-Jubeir held brief talks with his Iranian counterpart Javad Zarif at the sideline of the Organisation of Islamic Cooperation meeting in Istanbul on August 1.
"So one we can interpret the Saudi crown prince's call for mediation as a continuation of all those positive developments and the few words exchanged between Jubeir and Zarif. Yes, the two are seeking better ties, but no one knows what will happen in the future," he said.
Shia-majority Iraq lies on the faultline between Shia Iran and Sunni-ruled Arab Gulf monarchies including Saudi Arabia. In 2016 Iraq offered to mediate between the two countries.
In January 2016, Saudi Arabia severed diplomatic relations with Iran after an attack by protesters on its embassy in Tehran.
Protesters were angrily reacting to Saudi Arabia's decision to execute Shia religious leader Nimr al-Nimr, who was put to death along with 46 mostly Sunni Muslims convicted on terrorism charges.
At that point, the rival regional powers had been engaged in a war of words following the death of Iranian Hajj pilgrims outside Mecca in 2015.
Iran said at least 460 Iranians were killed in the incident, but Saudi Arabia officially reported only 131 Iranians dead.
Saudi Arabia and Iran have also accused each other of backing proxies in the war in Yemen and Syria.
Sunday's news report by ISNA quoted Araji as saying that Saudi Arabia's King Salman bin Abdulaziz Al Saud had earlier made the same request to him.
Araji reportedly told Salman saying that Riyadh "should show the best behaviour towards Iranian pilgrims", by allowing them to visit Janna al-Baqi cemetery, an important site for Shia Muslims located in Medina.
"The Saudi side has made certain promises in this regard, and the doors to the cemetery [are] already open to Iranian pilgrims," Araji was quoted as saying, according to an English translation by Iran Front Page of the ISNA report.
In the same report, Abdolreza Rahmani Fazli, Iran's interior minister, is quoted saying that it is important to respect and maintain the "dignity" of Iranian Hajj pilgrims, adding that Iran has "always sought cordial relations" with Saudi Arabia.
"Iran’s policy is to have effective cooperation with regional states, and Tehran has never been the first to sever its relations with others," he said.
With additional reporting by Ted Regencia.
[END REPORT]
********
Posted by Pundita at 8/14/2017 03:11:00 AM