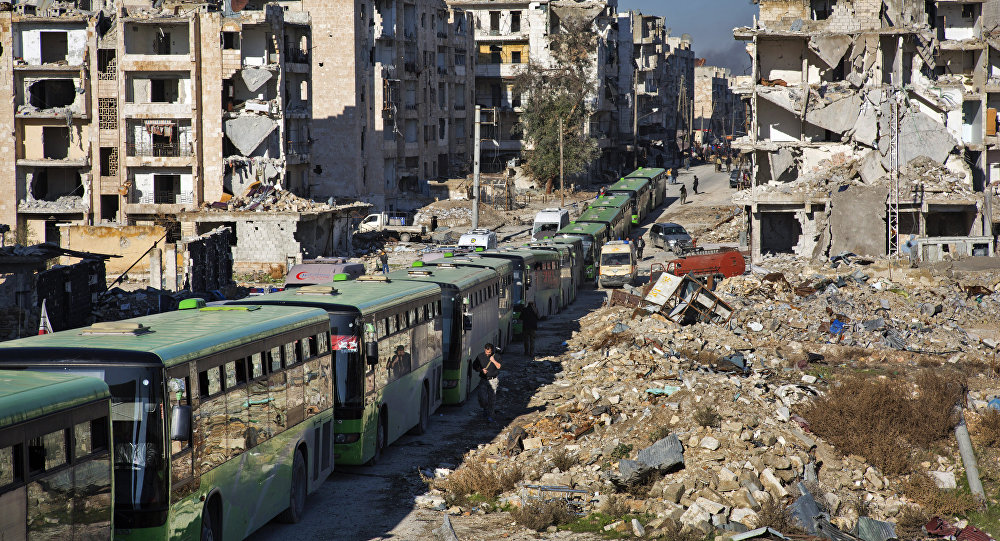 Photo: AFP 2016/ KARAM AL-MASRI via Sputnik
We're going to charge through an Evacuations sitrep, as it stands at this minute, plus a crash course on two important Syrian villages and a few remarks on Christian members of Hezbollah. Ready?

On Dec. 20 FARS posted a video report about the evacuation of approximately 900 civilians from two villages that had been under siege from the bad guys, and which had been mentioned quite a bit in the press in recent weeks:Fuaa & Kefraya. From the text accompanying the video, these evacuees "... entered Aleppo city from Idlib and were sent to temporary residential centers in Jibrin district."

However, this being the Syrian War, in which what was true a minute ago is not true in the next minute, and besides it turns out there are more than 900 people in those two villages -- (Just how big is the average Syrian village? Much bigger than before the war because they're crammed with refugees from cities.):

Yesterday FARS reported that the evacuation from E. Aleppo were proceeding apace. Today, as of
1:35 local time FARS reported:

[Well, at least it's progress now that FARS is making a distinction between militants and terrorists].

Not to be outdone, at 15:46 local time today Sputnik reported:

Evacuation of Militants From Eastern Aleppo Being Completed - Kremlin

From the report it looks as if Sputnik's Arabic desk and the Kremlin are not entirely in synch. [taking a swig from the sherry bottle] Okay, let's do the FARS report first:
TEHRAN (FNA)- A security source disclosed that terrorists groups' lack of commitment to an agreement on exit of injured civilians from two militant-held towns in Idlib pushed evacuation of militants and their families from the Eastern neighborhoods of Aleppo into suspension.

The source said that the terrorist groups that have laid siege on Fua'a and Kafraya towns in Northern Idlib once again violated the evacuation agreement's terms, leaving negative impact on the trend of transferring militants and their families from Eastern Aleppo.

The Arabic language desk of Sputnik reported that only one bus could take the militants and their families out of Aleppo yesterday and after that evacuation operation was suspended. [emphasis mine]

The source went on to say that relevant officials are trying hard to pave the ground for the restart of civilian evacuation from Fua'a and Kafraya.

Based on the latest reports 15,500 militants and their families have thus far left Aleppo and the army has called for faster evacuation of militant from the Eastern neighborhoods to dispatch engineering units to defuse terrorist-planed bombs and mines in the newly-freed districts.

A military source disclosed on Tuesday that a growing number of militants that had earlier called for evacuation from Aleppo refused relocation to terrorist-held regions in Idlib and turned themselves in to the Syrian Army troops, applying for amnesty.

The source said that while over 3,400 militants turned themselves in to the government forces since the army started operation in Aleppo's Eastern neighborhoods, a growing number of more militants and their families asked for government amnesty.

The militants that applied for amnesty rejected relocation to Idlib.

Meantime, reports said on Tuesday that the army troops urged terrorist groups to speed up their evacuation from Eastern Aleppo as engineering units are preparing to start defusing bombs and mines in the newly-liberated districts as soon as evacuation ends.

The army called on terrorist groups to leave Aleppo along with their families as soon as possible because the engineering units are waiting for the moment to start defusing bombs and mines planted by militants in the newly-liberated districts.

Reports further added that tens of buses and a number of ambulances entered Aleppo's Western countryside this morning carrying militants and their families.

A group of militants was transferred to the regions of Orum al-Kobra and Kafr Naha and other groups were dispatched to Idlib city.

Tens of buses were in al-Sukri district to take the rest of militants and their families out of Aleppo.

The army soldiers deployed around the besieged neighborhoods in Eastern Aleppo called on the militants to leave the region faster.

Are we game for Sputnik's report from the Kremlin? So what else do we have to do with our time?

MOSCOW (Sputnik) The process of pulling out militants from the Syrian city of Aleppo is being completed, the militaries of Russia and Turkey cooperate closely, and a series of negotiations produced results, Kremlin spokesman Dmitry Peskov said Wednesday.

Last Friday, the Russian Defense Ministry's center for Syrian reconciliation announced the end of the operation to liberate the city from militants who controlled the eastern neighborhoods since 2012. After that, evacuation of militants and their families, as well as evacuation of civilians started from eastern Aleppo. The day before, Russian Foreign Minister Sergei Lavrov expressed hope that the process would be completed in a few days.

"Now the pulling out of militants from eastern Aleppo is being completed. Moscow and Ankara closely interact through our defense ministries and general staffs. A series of intense negotiations produced a result, and the liberation of the city has a very important military, strategic and symbolic significance," Peskov told the MIR 24 television channel.

Got all that?  [taking another swig of sherry] Next:

By the way, those two villages mentioned at the top of this post are no longer exclusively Shiite, although you wouldn't know that from mainstream media reports about them. From a knowledgeable commenter at Sic Semper Tyrannis ("Bandolero") during a December 18 discussion with SST leader Colonel Pat Lang, who is himself very knowledgeable about the Middle East and its religions:


Fuah is mainly a 12er ["Twelver" Shiite sect] Shia village while Kafraya was mainly Ismaili. Today, because of the war, the reality is a bit different, because now there are all kind of people from other villages nearby, like Sunni government employees, Alawis, Christians and so on, who fear to be persecuted by the takfiri jihadis and [who] looked for shelter not far from home.

Regarding the discussion of Alawites being Muslim or not, I think these times are long gone on the Shia side. I don't know any Shia, and especially no marja, who doesn't regard Alawis as Muslim. A couple of decades ago, when Musa Al Sadr and Imam Khomenei ruled the Alawis to be Muslims and lost sons of the Shia, that may have been controversial, but on the Shia side that discussion is settled.

And the other thing is that the times when Hezbollah was a 12er Shia militia are also gone somewhat. Hezbollah nowadays defines itself not sectarian, but politically; i.e., as resistance (against Israel and Israeli partners in crime, eg Takfiris, American and European imperialists etc).

There are for example quite [a number of] Christians nowadays in Hezbollah -- wearing chains with crosses around their necks right next to pictures of [Hezbollah leader] Nasrallah [when they fight] in battles against Takfiris in Aleppo.

And believe me, in Fuah and Kafraya all kind of people are united, especially since it is essential to survive in what may well be the most difficult situation in the whole of Syria.

I wanted to mention all the above because the MSM and a number of mainstream commenters have been making it seem that the only interest the Iranian government has had in getting the villages evacuated was to save the Shiites there from Sunni terror groups. Obviously that was not the whole story, from Bandolero's remarks.

Granted, it's a hard war to follow, even for people who are knowledgeable, because the battlespace is so very fluid and there are so many players. But the MSM has repeatedly showed itself to be slow-footed. One is absolutely lost trying to depend on those sources to learn what's happening in the Syrian War.