China in the Middle East: Oh Islam not listed on Chinese stock exchanges

"The paradox of China’s approach to the Middle East is that Beijing hopes to stabilize the region through investment but its investments require stability in order to succeed. If the closest example of Beijing’s dealing with sectarian, ethnic and religious strife is its restive Xinjiang province, then the increase in violent incidents involving Muslim Uighurs under Beijing’s policies does not bode well for its future in the Middle East."

As we all know or should know the Chinese definition of crazy is "not Chinese," and don't give me the balkanization rap that only "Han" Chinese think this way. Why, then, are Beijing technocrats fooling around in the Middle East? All those people are so crazy they only have two reasonably sane heads of state (by non-Chinese standards) -- the Sultan of Oman and Syria's President, and the only way Assad hangs onto sanity is by opening the refrigerator in his kitchen every morning and screaming into it for five minutes.

So if I liked the Chinese I'd give them good advice: don't fool around with those people in the Middle East; stick with the Africans, who aren't quite as crazy. But I don't like the Chinese and besides they wouldn't listen to me anyway, so go right ahead; anything to keep Chinese engineering graduates gainfully employed building bridges and roads and tunnels and railways and airports and structurally sound camel paths through mountain passes.

GUANGZHOU, China — Fahd Ali Esmail owns Saba, the only Yemeni restaurant in Guangzhou. He went to China in 2001 at the age of 18, following his father, who had been working in the garment trade in Indonesia.

Esmail spoke neither Chinese nor English then but picked up both as his family moved its fabric business to Guangzhou, then opened a restaurant in 2002. As China joined the World Trade Organization, Arab businessmen flooded into special economic zones like Guangzhou, ordering everything from lingerie to toothbrushes from Chinese factories to sell in the Middle East.

“China welcomes Arabs more than Arabs themselves,” said Esmail, who grew up in Saudi Arabia but has no intention of returning there or to Yemen, especially with the ongoing civil war. His family has found customers among the Arabs who congregate in areas like Guangzhou’s Xiaobei Lu, a hub for African and Middle Eastern communities. There, cellphone stores selling unlocked SIM cards with Facebook access sit among mini-markets stocked with dates, tahini and chocolate imported from Iran. Chinese waiters serve customers from menus filled with Levantine salads and Turkish kebabs as well as Cantonese dim sum.

Arabs are in China largely for the same reason that China is increasingly going into the Arab world: business. Last month Chinese president Xi Jinping made his first diplomatic visit to the Middle East. Amid heightened regional tensions after Saudi Arabia’s execution of prominent Shia cleric Nimr al-Nimr, Xi met with leaders in Riyadh, Cairo and Tehran. His trip underscored China’s recent attempts to expand its role in conflict resolution, even as Beijing emphasizes its principle of noninterference. China supports peace talks rather than “looking for a proxy in the Middle East or seeking any sphere of influence,” Xi remarked before the Arab League at its headquarters in Egypt.

But China’s strength lies in its economy, and as the country’s GDP growth slows down, Beijing is building its diplomatic goals on a vision of peace and stability through business as usual. Xi and his recently established Asian Infrastructure Investment Bank have already pledged $100 billion in financing for the One Belt, One Road initiative, an ambitious vision of Chinese investment and trade rejuvenating the ancient Silk Road from China through Central Asia to the Middle East. His visit helped substantiate the plan as he offered $55 billion worth of loans and investments in the region, mostly for infrastructure and industrial development.

China’s overtures to the Middle East come at a time of economic shifts. “The economic slowdown in China is exactly what’s driving Xi Jinping’s increased efforts to advertise for One Belt, One Road,” said Tong Zhao, an analyst at the Carnegie-Tsinghua Center for Global Policy. 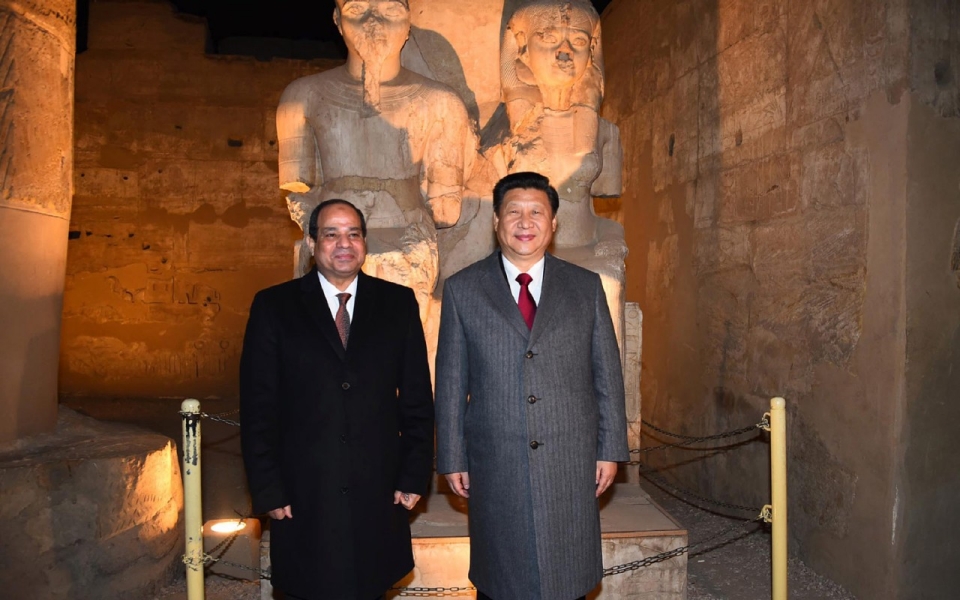 China’s slowdown has affected business in Guangzhou, but not to the extent that traders are withdrawing en masse. Muta Daker, a Syrian, owns La Rosetta, a lingerie franchise, with a factory in Guangzhou, that exports underwear and nightgowns to Dubai. He employs 50 people, including 35 sewing workers who live in factory dormitories, with food provided — standard for migrant workers in the area. When he opened his factory in 2008, laborers were paid 1,200 yuan ($184) per month.

“Now you can’t find a worker for 3,000 or 4,000 yuan,” he said. Costs have gone up so much that a garment business is no cheaper to run in China than in Turkey, he said. But China remains unbeatable for its sheer amount of manpower, even with rising costs. “No one can replace China in terms of productive capacity.”

Expansion of Sino-Arab trade ties benefits businesses like Seven Seas Shipping, a Jordanian air and freight company headed by Nader Shahrouri, 34. “China is the factory of the world,” he said. “All the world has an economic crisis now. China has a crisis too, but it will keep on exporting.” His company beats Chinese competitors by providing access to areas rife with conflict. Other shippers can reach Dubai, but it takes regional expertise to provide door-to-door deliveries to Damascus and Baghdad.

His company recently secured a deal to ship Chinese oil extraction and infrastructure construction equipment from Shanghai to Jordan for the Attarat Power Plant, a planned project slated to cost $1.6 billion, financed by loans from the Bank of China and the Industrial and Commercial Bank of China. Attarat could become the second-largest oil-shale-fired power plant in the world, he said, but the project has been delayed. “Oil prices are down,” he said.

As Xi made his rounds, Chinese analysts and media outlets praised China’s approach. State-run outlet The Global Times ran an article titled “The West’s interference in the Middle East hurts itself and others,” presenting China as an important alternative.

“China is the only great nation without imperial interests or demands in the Middle East,” said Li Shaoxian, the vice president of China’s Institute of Contemporary International Relations. A central cause of Middle Eastern instability is overlapping conflicts among various great powers fighting to secure their interests in the region, he wrote in The People’s Daily. China can meet the Middle East’s two urgent needs, he added: security and economic renewal. “Economic growth is the foundation for stability, especially after structural turmoil.”

But the feasibility of an economic cure-all in the Middle East is far less certain, especially amid conflicts rooted in causes more complex than mere poverty. Fighting radical violence, for example, has become a higher priority for Chinese authorities, who recently passed a new counterterrorism law allowing China’s armed forces to pursue offensive operations abroad. In November the Islamic State in Iraq and the Levant killed Chinese hostage Fan Jinghui, spurring Xi to promise that China would “firmly crack down” on a “common enemy of humanity.”

The paradox of China’s approach to the Middle East is that Beijing hopes to stabilize the region through investment but its investments require stability in order to succeed.

If the closest example of Beijing’s dealing with sectarian, ethnic and religious strife is its restive Xinjiang province, then the increase in violent incidents involving Muslim Uighurs under Beijing’s policies does not bode well for its future in the Middle East.

In September a Uighur group attacked a coal mine in Aksu in Xinjiang,killing at least 50 mostly Han Chinese workers. State security forces retaliated in November, killing 28 alleged fighters. In between, Beijing released a white paper celebrating Xinjiang’s “ethnic equality, unity and development,” supposedly brought about through the successful strategy of economic investment.

The problem of domestic Muslim minorities’ unrest has already affected Beijing’s relations abroad. Turkey, whose citizens are sensitive to the grievances of the Uighurs, a fellow Turkic people, saw violent anti-Beijing demonstrations this summer as Chinese authorities restricted Uighurs from fasting during Ramadan.

For now, China’s preference is to take gradual steps, communicate well and focus on economic strength, despite fears of irreversible slowdown. “The general approach to its domestic Muslim population is to show that China is taking no sides, just trying to advance Chinese economic interest in the region,” said Zhao. “China knows it has no experience in the region. So the safest way is to start with economics.”

In Guangzhou, Arab businessmen agreed with the approach prioritizing trade links. Syrian Khalid Beiruti owns a Levantine restaurant, Shami House, and a garment-exporting business. Syria was more developed than China in 1985, when he started his garment company. Back then, he exported from Thailand, but China became a more profitable option in 2000, so he moved to Guangzhou; 16 years later, China and Syria can’t be compared. “It’s not bad, this idea that business can solve many problems. But it’s not that simple,” he said at his restaurant.

As he paused to sip a cup of mint tea, the television behind him broadcast news of airstrikes in Aleppo. “Let’s not talk politics,” he said. “We just do business.”