"A state of panic was deliberately caused by someone."

A handful of testimonials has emerged about the Douma incident in Syria, some asserting that a chemical weapon was used on civilians, others dismissing the claim. The above video, published at YouTube by Syria Alikhbaria (Syrian News Channel), records testimonials given by medical personnel attached to the clinic in Douma at the time of the incident. (The testimonials are interrupted by a brief discussion of the White Helmets.)

The personnel recounted that they were treating patients for various conditions when a White Helmet member entered and yelled that there had been a gas attack. The pandemonium that erupted was then videotaped by at least one White Helmets member (or possibly a Jaysh al-Islam militant).

The personnel claim that none of the patients suffered from exposure to a chemical agent although a number of them had bronchitis and other lung ailments caused by poor ventilation in their living quarters.

Their claims comport with those of a doctor interviewed by veteran journalist Robert Fisk and published in the (U.K.) Independent newspaper on April 17:


... It was a short walk to Dr Rahaibani. From the door of his subterranean clinic – “Point 200”, it is called, in the weird geology of this partly-underground city – is a corridor leading downhill where he showed me his lowly hospital and the few beds where a small girl was crying as nurses treated a cut above her eye.

“I was with my family in the basement of my home three hundred metres from here on the night but all the doctors know what happened. There was a lot of shelling [by government forces] and aircraft were always over Douma at night – but on this night, there was wind and huge dust clouds began to come into the basements and cellars where people lived. People began to arrive here suffering from hypoxia, oxygen loss.

Then someone at the [clinic] door, a “White Helmet”, shouted “Gas!”, and a panic began. People started throwing water over each other. Yes, the video was filmed here, it is genuine, but what you see are people suffering from hypoxia – not gas poisoning.”

Fisk reported that Dr Rahaibani and the other physicians  were not eyewitnesses at the clinic at the time of the incident:


By bad luck, too, the doctors who were on duty that night on 7 April were all in Damascus giving evidence to a chemical weapons enquiry ...

That meant they were filled in by the medical personnel on duty (e.g., nurses) as to what had happened.

The Syrian News Channel is supportive of the Damascene government so the question is whether the personnel had been coached on what to say. I think one argument in favor of their version of events is evident in this photograph and ones like it taken in the Douma clinic on the night of the incident:

If you are familiar with the symptoms displayed by a victim of a real chlorine gas attack or sarin, one look at the photograph would indicate that the children were most definitely not suffering from sarin, and that if they'd inhaled chlorine fumes they'd gotten a very mild exposure.

I should add that perhaps not all the people in the Douma clinic were suffering any ill effects whatsoever when they arrived:


"We were in the basement. Mom told me that today we don't have anything to eat and that we will eat tomorrow. We heard a cry outside, calling "go to the hospital." We ran to the hospital and as soon as I entered, they grabbed me and started pouring water on me," Hassan Diab said.

His father continued the story. He was at his work when he heard that his son was in hospital. He rushed to the hospital and found his family there in good health.

"There were no chemical weapons. I smoked outside and felt nothing. I entered the hospital and saw my family. Militants gave them dates, cookies and rice for participating in this film and released everyone to their homes," Hassan's father said.

Hassan is not enjoying his 15 minutes of fame. Dad is. 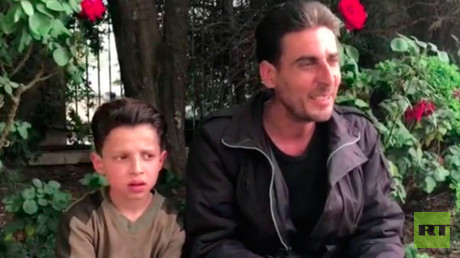 Were father and son coached by the Syrian government to lie about their experience in the clinic, or did they cook up a lie on their own? It's possible. But their version of events has some weight when considered alongside accounts given by the medical professionals in the Douma clinic.

As I noted there are accounts that would contradict the ones discussed above. From CBS News April 16:


On Monday, CBS News made it to the house where the suspected chemical attack took place.

"All of a sudden some gas spread around us,"  one neighbor recounted. "We couldn't breathe, it smelled like chlorine."

However, I think everyone can agree that it's easy to set off a panic by yelling 'Gas attack!' in a crowded hospital clinic.

At least the people in that particular clinic and town had a good excuse to panic. Those who watched video of the pandemonium from the comfort of their homes far away from Syria have no excuse. They especially don't have an excuse to be stampeded into supporting a military version of a lynch mob, which is what the U.S.-led attack on Syrian government facilities last week amounted to.