UPDATE:
See my post today, So Israel is just trying to defend itself from Iranian aggression, eh?
END UPDATE


Photo from video footage of one strike 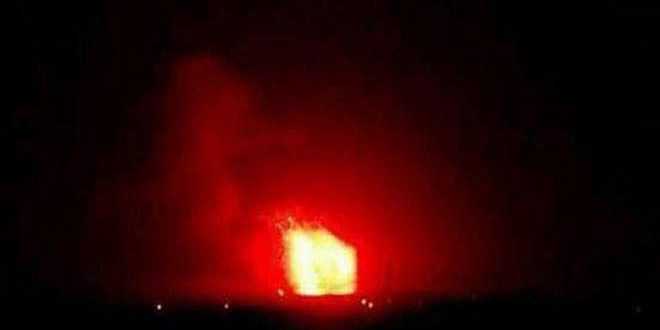 There is amateur video of one of the strikes; see RT website for the video.

The RT report expands a little on SANA's terse report on the strikes.

The strikes come within a few hours of the U.S. greenlighting Israel's military to launch all-out war on Syria's military, although it wasn't put quite that baldly by IDF propaganda funnel Debkafile, which reported today at 19:42 Pompeo’s thumbs up for Israel to counter Russian-backed Iranian drive in Syria:

As US Secretary of State Mike Pompeo and Prime Minister Binyamin Netanyahu sat down on Sunday, April 29 in Tel Aviv to discuss the Iranian threat, a Russian-backed Syrian force struck across the Euphrates to capture a string of US-backed fortified Kurdish SDF villages.

This incursion of a key US area of influence region in eastern Syria, if confirmed, would rip up a key element of the US-Russian deconfliction zones accord and provide Iran with a springboard for a leap up to the Iraqi border.

Standing alongside Netanyahu, the secretary backed Israeli efforts to counter Iran in Syria. He said the US is committed to “rolling back to the full range of Iranian malign influence in Syria,” specifically mentioning “Iran’s missile systems, its support for Hezbollah, its importation of thousands of Shiite fighters into Syria.”

DEBKAfile: This was taken as a US green light for Israel to take on the elements threatening its security from Syria. The secretary also stressed that the US would continue to fight ISIS and not tolerate the Assad regime using chemical weapons.


Powerful explosions have been heard in the countryside of Hama and Aleppo provinces, the Syrian state news agency reports. The state media says military bases there were his by rockets launched by an unspecified enemy.

The alleged attacks were reported by Syria’s Sana news agency on Sunday evening. Citing a military source, it said that “a new aggression with hostile missiles” took place at around 10:30 pm local time, targeting military positions in the Hama and Aleppo villages.

A Syrian law enforcement source told RIA Novosti that the army’s munition depots were hit, in what was most likely an airstrike.

There have been unconfirmed reports of injuries and fatalities as a result of the reported strike. Sky News Arabia reported, citing rebel sources, that up to 38 people might have been killed.

Videos posted online, allegedly from the scene of one of the strikes, show a massive explosion that lights up the skyline.

There will be more to follow at Pundita blog as well; I'll update this post as more information is available.

The strikes also come on the heels of significant gains by Syria's military. See SST's situation report, posted this evening about an hour ago, which begins: "Things are going from good to excellent for the R+6."  (R+6 = Syrian military and its allies.).

Yes, things have been going very well for the SAA -- probably too well from the viewpoint of Al Saud and its, uh, client states USA and Israel. As to how Erdogan is reacting to all this --

Are the Jews stupid enough to attack a Russian base? We soon will see. This strike may be the opening of a whole new war in Syria. One that might spill over into Israel itself.