Syria False Flag: Repeating Baseless Claims is not "Mounting Evidence"
By Tony Cartalucci
April 12, 2018
Land Destroyer
Thus, contrary to the Guardian's claims, the report from WHO's partners in Syria does not "add to mounting evidence;" it is simply repeating the same, initial and still unverified claims made by the White Helmets.
WHO "Authority" Used to Bolster Original Unverified Reports, Not Add New Evidence  The World Health Organization, in a recent statement attempting to bolster these accusations, claims that up to 500 patients appear to have been exposed to chemical poisoning, but would cite its "Health Cluster partners," the Daily Beast would report.The Guardian in its article, "Syria: 500 Douma patients had chemical attack symptoms, reports say," would attempt to claim:

The report from the WHO’s partners in Syria adds to mounting evidence of the use of toxic gas in the attack, which killed at least 42 people and has raised the prospect of American airstrikes against forces loyal to the regime of Bashar al-Assad.

However, according to WHO's own website, these partners include Médecins Sans Frontières (MSF), which in turn, according to MSF's own website trains and supports the White Helmets. MSF has repeatedly admitted throughout the Syrian conflict that it does not have a presence on the ground in conflict areas and merely provides material support to groups that do.Thus, contrary to the Guardian's claims, the report from WHO's partners in Syria does not "add to mounting evidence," it is simply repeating the same, initial and still unverified claims made by the White Helmets.The White Helmets have been repeatedly caught in the past fabricating evidence and staging scenes for propaganda value. In fact, all evidence suggests the entire purpose of the White Helmets is the production of propaganda.

This culminated in 2016 when the organization inadvertently revealed their theatrical methods during a protest in multiple European cities. They applied red paint and flour to their bodies and posed as victims for European media outlets and local bystanders. 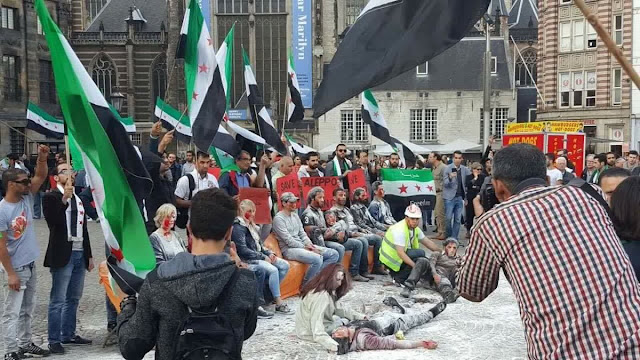 The scenes were indistinguishable from daily clips uploaded by White Helmet members allegedly carrying out emergency services in militant-held territory in Syria.

Absent from virtually all of their videos are scenes of actual injuries - open wounds, crushed or severed limbs, burns etc. [emphasis mine] Videos also lack any context, and are often heavily edited.Real Evidence Requires a Real, Onsite Investigation Readers should recall that accusations of chemical weapon attacks last year that led to a US cruise missile barrage against Syrian government targets, were also never confirmed. The investigation carried out by the The Organisation for the Prohibition of Chemical Weapons-United Nations Joint Investigative Mechanism (OPCW-UN JIM) report on the alleged attack would admit that no investigators even visited the scene of the attack.The UN in a news article regarding the report would even claim (emphasis added):

Although it was too dangerous to visit Umm Hawh and Khan Shaykum, the panel considered that sufficient information had been gathered to come to a solid conclusion.

The report - while assigning blame to the Syrian government - admits it could not confirm a Syrian aircraft dropped the supposed munition allegedly used in the attack - and that munition fragments passed to investigators lacked a chain of custody, negating its probative value.As for Western media claims regarding "mounting evidence" regarding the most recent attempt to accuse the Syrian government of using "chemical weapons," no additional - or credible - evidence can "mount" until investigators arrive on the ground.