"Many 'rebel' leaders in Idlib are Saudis and Egyptians"

All kinds of interesting info in MoA's latest Syrian War sitrep, which I've posted below, including this zinger: "The quarter million displaced persons the UN claimed to be in the area have not been found." A UN typist's typo, perhaps?

I'd like to add one detail to Bernhard's mention that Russia initiated talks with the French and German regimes about the return of refugees to Syria and financial help for Syria's recovery from the war. From RFERL/RL on July 29, Erdogan: Turkey Plans Summit On Syria Conflict In September:

I don't know where RFE/RL got that information. It says at the end of the report that it's "With reporting from AFP and TASS" although no links to any relevant reports at those sites are provided. I do know that RFE/RL -- Radio Free Europe/Radio Liberty -- is famously an American 'information operation' and that of course the mentioned three countries are NATO members.

I find it surprising that Germany would be supporting any rebel groups in Syria -- and doubly surprising that RFE/RL would mention this. Yet any ongoing German/French  support for rebels is perhaps another reason a Russian envoy had a little talk with his counterparts in those two countries.

As to Turkey calling a summit in September about the war -- I think maybe that would be a little late in the day, so I'm not sure it will take place. Now to MoA's sitrep: 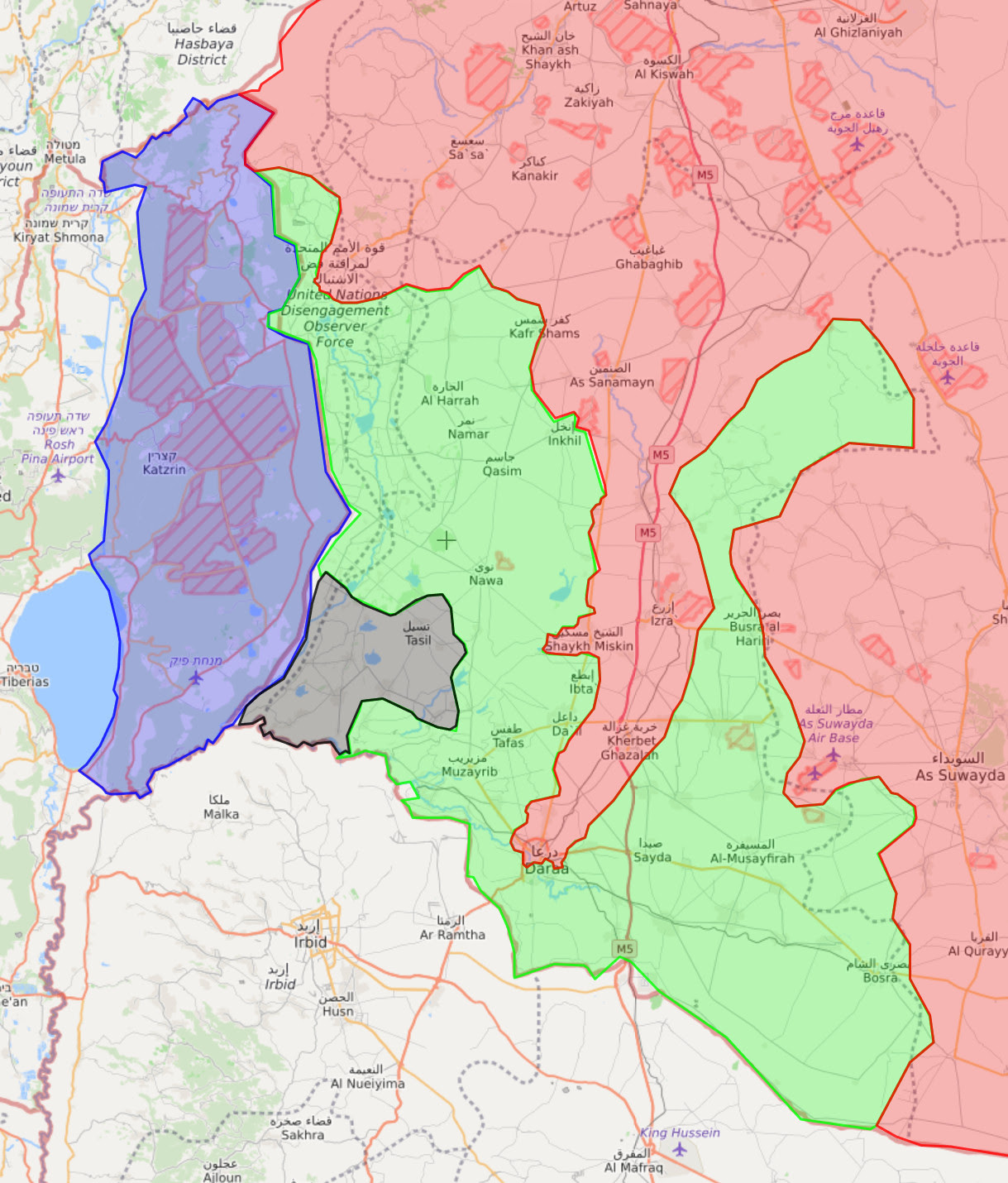 The Syrian Arab Army campaign in southwest Syria is coming to an end. The whole (green/black) area held by "rebels" and ISIS just six weeks ago is now liberated. After early resistance was overcome by a large force, many "rebel" groups gave up their fight and agreed to hand over their heavy weapons to the government forces. Those who accepted reconciliation agreements were granted amnesty, a few preferred to be evacuated to Idleb governorate.

[see above map, posted at MoA]

The quarter million displaced persons the UN claimed to be in the area have not been found.

After the eastern half was cleaned and "rebels" in Daraa city defeated the fight continued in the Quneitra area along the ceasefire to the Israeli occupied Golan Heights. Here the early resistance was again strong but soon broke down. The "rebels" were offered a new alternative. They could attach their units to the Syrian army. More than 400 are now serving with the 4th Armored Division led by Maher Assad, the brother of Syria's president. Others were formed into the separate 'Ahmed' brigade. Many of these former "rebels" helped to overcome the resistance of the last ISIS fighters at the southwestern border with Jordan. A few of the ISIS nutters survived and were taken to prison (vid).

This model of converting "moderate rebels" into government soldiers to fight al-Qaeda, ISIS and other radical Islamists will be an important element in the upcoming operation to liberate Idleb.

During the last phase of the attack on ISIS holdouts in Quneitra some 150 other ISIS fighters, who had earlier dispersed in the southeastern desert, launched a surprise attack on Suweida city which is home of many Druze people. Lax guarding and likely some inside help enabled the night assault. The ISIS fighters went from house to house and slaughtered more than 250 civilians before escaping. A similar number of people were wounded.

Forces that were part of the southwestern Daraa operation have now been dispatched to comb through the semi-desert where these ISIS fighters are hiding. A similar situation exists in Iraq's Anbar desert. The size of the areas and the hilly geography make it difficult to find a dispersed enemy. It will require continuous long-range desert patrols and several large sweeping operations to hunt these animals fiends down.

Some of the military forces which took part in the southwestern battle had already moved north. Others will now follow. Idleb province is largely under control of Hay'at Tahrir al-Sham, the former Jabhat al Nusra and part of al-Qaeda. The total opposition force in Idleb governorate is estimated at 80-120,000 of which some 15,000 are foreigners including large contingents of Uighurs, Turkmen and Chechnians.

Many of the "rebel" leaders in Idleb are Saudis and Egyptians. In total there are less than 2 million people in the (green) rebel held area. The Syrian government has opened several corridors to enable civilians to flee towards its side.

The large government campaign to liberate Idleb governorate will only start in September. Preliminary 'shaping' operations by artillery and air will prepare the battlefield.

The western "rebel" area in Latakia near the Turkish border will have to be recovered before proceeding towards Jisr al-Shughur where many foreign fighters reside. The first large phase will recover the areas south of the (Latakia) - Jisr al-Shughur - Saraqib - Aleppo road. There will likely be several axes of operations from the east, south and west. This for now would avoid a fight for the city of Idleb. The resistance by local Syrian "rebels" will likely be weak. They are demoralized and only think of how to escape from another fight. The Idleb campaign will likely take no longer than three to four months.

Turkey is responsible for the 'de-escalation area' of Idleb governorate. It was supposed to separate the "moderate rebels" from al-Qaeda and other radical fighters but did not succeed. Turkish forces holds some 12 outposts along the current demarcation line between the government and the rebels. It is not expected that these isolated, platoon sized units will take part in any fight.

Turkey's President Erdogan had hoped to keep parts of Syria for Turkey. That is unlikely to happen. Turkey is in deep trouble. Today the Trump administration sanctioned the Turkish Ministers for Justice and Interior for keeping U.S. pastor Andrew Brunson under Turkish house arrest. Congress threatens to sanction Turkey should it buy the Russian S-400 air-defense system.

The Turkish Lira just broke through the 5 lira per US$ mark and continuous to fall. Many Turkish companies and banks took loans in U.S. dollars and Euros and will have problems repaying these. The U.S. military supports the anti-Turkish PKK/YPG militias in northeast Syria. Turkey has nowhere to go. NATO will not come to its help. It cannot start a war against Syrian forces, which have the support of Russia, without strong U.S. backing.

Over the last two days another round of the Astana talks between Russia, Turkey and Iran was held in Sochi, Russia. The final statement again emphasizes Syria's territorial integrity and sovereignty. With the Syrian army coming north, Turkey can no longer justify to hold onto Syrian land.

After the recent Sochi talks Alexander Lavrentiev, President Vladimir Putin’s special envoy to Syria, spoke (Ru, machine translation) with TASS news agency about the Idleb campaign. He hopes that a big fight over Idleb can be avoided. The plan is to incentivize "moderate rebels" to join the Syrian army in the fight against the Islamists as recently seen in Daraa. The Russian reconciliation officers are ready to make such offers.

Last week the Syrian government held talks with the Kurdish YPG/PKK organization that acts as U.S. proxy in northeast Syria. The Kurds want strong autonomy or even a federate state with its own income sources but are unlikely to get that much. The U.S. will not start a fight with the Syrian government when it recovers its northeastern land.

Other Syrians will not forget that the Kurds enabled the U.S. occupation of parts of their land and let Afrin go to the Turks instead of handing it to the Syrian government. The YPG/PKK Kurds are useful for Syria to threaten Turkey but that's about it.

Russia initiated talks with the German and French governments about the return of refugees to Syria and financial help for Syria's recovery from the war. As a first tranche of its atonement fee France sent a planeload of medical supplies to Damascus. More such gestures will follow.