"Unlike their previous battles in this part of province, this offensive will not stop until the Syrian Arab Army fully seals off the Latakia-Turkey border."


There is NO planned offensive to retake all of Idlib. Only thing that has been put in motion is Jisr Al-Shughour [see AMN report below]. The Turkish Army is all over Idlib and nothing can happen there unless they coordinate with Russia.

Okay but from a FARS report, also posted below, it looks to me as if the SAA isn't waiting until September to move on at least some parts of Idlib province. In any case, they're intent on completely sealing off the border between Turkey and Latakia province and they're getting all their ducks in a row in other places as well.

BEIRUT, LEBANON (10:00 P.M.) – With the battle for southwest Syria finished, the Syrian Arab Army (SAA) is now shifting their attention to the northwestern part of the country.

In particular, the Syrian Arab Army is gearing up for two major battles in northwest Syria, with both concentrating on sealing off the Latakia Governorate from the jihadist rebels.

The first major attack will focus on the Jabal Al-Akrad and Jabal Turkmen regions of northern Latakia that are partially controlled by Hay’at Tahrir Al-Sham [latest name for al Qaeda in Syria], the Free Syrian Army (FSA), and several jihadi factions.

Unlike their previous battles in this part of province, this offensive will not stop until the Syrian Arab Army fully seals off the Latakia-Turkey border.

The northeastern border of the Latakia Governorate has long been a major entry zone for the jihadist rebels from Turkey.

If they can seal off the Latakia-Turkey border, they will be in prime position to attack the jihadist stronghold of Jisr Al-Shughour.

While the Syrian Arab Army’s 4th Division focuses on northern Latakia, the Tiger Forces will be tasked with retaking the entire northern portion of the Al-Ghaab Plain.

Due to its proximity to Jisr Al-Shughour, the Al-Ghaab Plain will need to be retaken before the Syrian Arab Army can make their push into this strategic city.

The Al-Ghaab Plain is currently controlled by the jihadist rebels of Hay’at Tahrir Al-Sham, the Free Syrian Army, the Turkestan Workers Party, and Jabhat Tahrir Souriya.

The last part of the Syrian Army’s offensive will focus on capturing the jihadist stronghold of Jisr Al-Shughour, which is located close to the Turkish border.

Jisr Al-Shughour was captured by Jabhat Fateh Al-Sham in May of 2015; it has since become a major hub for the jihadist groups in northwestern Syria.

The city is also where the jihadist rebels launch most of their missiles into Latakia from, which is another reason why the Syrian Army’s High Command and Russian military want it recaptured.

[emphasis in report is mine]

TEHRAN (FNA)- The Syrian army forces heavily pounded the positions of Tahrir al-Sham Hay'at (the Levant Liberation Board or the Al-Nusra Front [aka al Qaeda]) in Hama and Idlib while large military convoys arrived in Northern Syria to start operations against terrorists in Idlib.

Field sources in Northern Syria reported on Thursday that the army has dispatched a major military convoy, consisting of hundreds of forces and military equipment, to Northern Hama.

They added that a large number of special army forces along with military equipment have been sent to the regions near the terrorist-occupied regions in Western Idlib, saying that the Syrian army enjoys high preparedness to launch military operations in Idlib.

Meantime, the Syrian army's artillery and missile units heavily attacked Tahrir al-Sham and other terrorist groups' positions and moves in the towns of al-Latamina and Kafr Zita and the villages of al-Jaisat and Tal Othman in Northern Hama as well as the village of al-Qarqour in Sahl al-Qab.

Reports also said that during the attacks, a large number of terrorists were killed and wounded and their military equipment was destroyed.

In a relevant development on Wednesday, the Syrian army's artillery and missile units opened heavy fire at terrorists' movements in Northern Hama and Southern Idlib, destroying their positions and cutting off their supply lines.

Tahrir al-Sham Hay'at terrorists' positions in the villages and towns of Lahaya, al-Latamina, Kafr Zita and al-Zakat in Northern Hama came under heavy fire of the artillery and missile units.

Several supply lines of the militants were destroyed in the attack.

In the meantime, the army destroyed several positions used by terrorists to monitor the army's movements and to launch sniper attacks on the government forces in the Northern Hama. 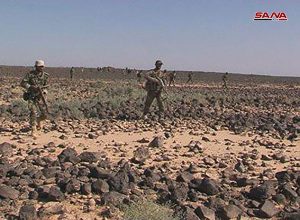 Sweida, SANA-Units of the Syrian Arab Army and the back-up forces on Thursday advanced more in Sweida eastern countryside, expanding their control in the depth of al-Badyiah after inflicting heavy losses upon Daesh terrorists.

A SANA reporter said that units of the army established control over new areas on the direction of al-Karaa, tloul al-Safa reaching Dahrat Rashid and Ber al-Sout.

The reporter added that the army units are hunting down remnants of Daesh Takfiri terrorists and combing the roads and valleys in the liberated regions with 35 km depth in the semi-desert.