Breaking News: Erdogan arrests his cat. "She was looking at me strangely."

Don't worry, the nukes are safe 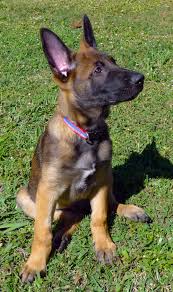 The running count of Erodgan's purge of Turkish citizens he suspects plotted his overthrow is about 50,000. Here's a breakdown from someone named Amichai Stein (H/T Moon of Alabama): 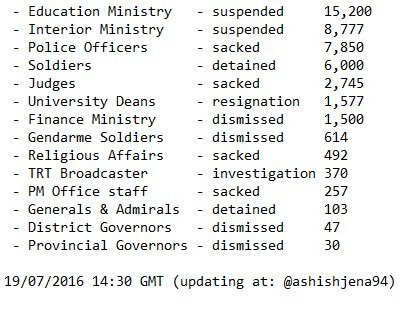 From an Associated Press report today:

The Turkish government on Tuesday escalated its wide-ranging crackdown against people it claims have ties to plotters of last week's attempted coup, firing tens of thousands of public employees across the country.

The dismissals touched every aspect of government life.

Turkish media, in rapid-fire reports, said the Ministry of Education fired 15,200 people across the country; the Interior Ministry 8,777 employees; and Turkey's Board of Higher Education requested the resignation of 1,577 university deans -- akin to dismissing them.

In addition, 257 people working at the office of the prime minister were dismissed and the Directorate of Religious Affairs announced it had sacked 492 staff including clerics, preachers and religious teachers. Turkey's Family and Social Policy Ministry said it dismissed 393 personnel.

The firings come on top of the roughly 9,000 people who have been detained by the government, including security personnel, judges, prosecutors, religious figures and others. Turkey's state-run Anadolu news agency said courts have ordered 85 generals and admirals jailed pending trial over their suspected roles in the coup attempt. Dozens of others were still being questioned.

A Reuters report today notes that deans at "all" universities in Turkey were 'requested' to resign and and that the licenses of 21,000 teachers working in private institutions have been revoked by the High Education Board:


"Tip-offs that these (people) are mostly linked with terrorist activities have been taken into consideration," the ministry official said, without elaborating.

Meanwhile, they're still stumbling around in the dark at Incirlik. From another Associated Press report today


Base in Turkey used for US-led missions still without power
U.S. officials say there has been no move yet to turn the power back on.

The U.S. has been relying on back-up generators to run base facilities and continue flight operations out of Incirlik.

So far, officials say there hasn't been much impact on the flights out of Incirlik, which include airstrike, surveillance, refueling and other missions. Some missions have been shifted to other locations, but officials won't specify how many.

U.S. officials say they still have no idea when or if the power will be turned back on. They say base operations can continue with generator power.

As to whether the 90 U.S. tactical nuclear weapons stored at Incirlik are safe with the power down -- not to worry, the temporary base commander (the permanent one having been arrested) sequestered 2 Belgian Malinois puppies from a U.S. Special Forces unit in Iraq to guard the nukes. "Actually," the commander told an AP reporter, "they do a better job than the electronic system."