"Massive fire near NATO base in Turkey, possible anti-American sabotage" A massive fire erupted near a NATO base in western Turkey. Authorities are investigating the fire as a possible act of anti-American sabotage.

The inferno started on Sunday evening in western Turkey. The fire blew through the grassy wooded area and is now perilously near NATO’s military base pushed forward by strong winds.
​CNNTurk reports that the fire threatens a number of populated areas, and has already impacted a home for the elderly and its adjacent garden, T24 News reports. The channel also reports that anti-American "sabotage" in the wake of the attempted overthrow of the Erdogan government is suspected.
The fire threatens the Allied Land Command (LANDCOM) base at Şirinyer (Buca) in İzmir, Turkey. LANDCOM is tasked with supporting US troops to enhance reaction time and the unit is equipped to respond to international crises.
Although Washington maintains its largest overseas nuclear arsenal in Turkey, consisting of up to 90 tactical nuclear weapons, the US atomic weapons stockpile is stored at Incirlik air base and no such weapons of mass destruction are reportedly stored at the Izmir base.
The fire is not fully subdued despite hours of effort along with the use of firefighting helicopters and airplanes conducting water drops according to local news outlets.
Sunday's fire comes in the wake of the failed attempt to overthrow the Erdogan government last week that the regime has blamed on US-based cleric Fethullah Gulen. The country's Laber Minister created a stir when he said on live television during an interview with HaberTurk that "the US is behind the coup." This hyperbolic statement, condemned by the US State Department, was followed by a threat from Turkish Prime Minister Binali Yidlirim that Ankara would go to war with "any country" that supports Fethullah Gulen — a direct reference to the United States.
The US has repeatedly informed Turkey that they are unable to extradite the alleged mastermind of the coup, Fethullah Gulen, under US law without sufficient evidence. A recent poll shows that only 17% of Turks welcome the United States in the country and with Ankara shifting towards a more nationalistic posture attacks against US installations may become more likely in the wake of the failed coup.
[END REPORT]
Prior to Outbreak of Massive Fire Near NATO Base Pro-Erdogan Islamist Paper Said US General Led Coup Against Erdogan
04:43 25.07.2016(updated 05:47 25.07.2016)
Sputnik

[Headline and lede edited by Pundita because language is confusing. Pix of the U.S. general is directly under "Yeni Safak" banner ] 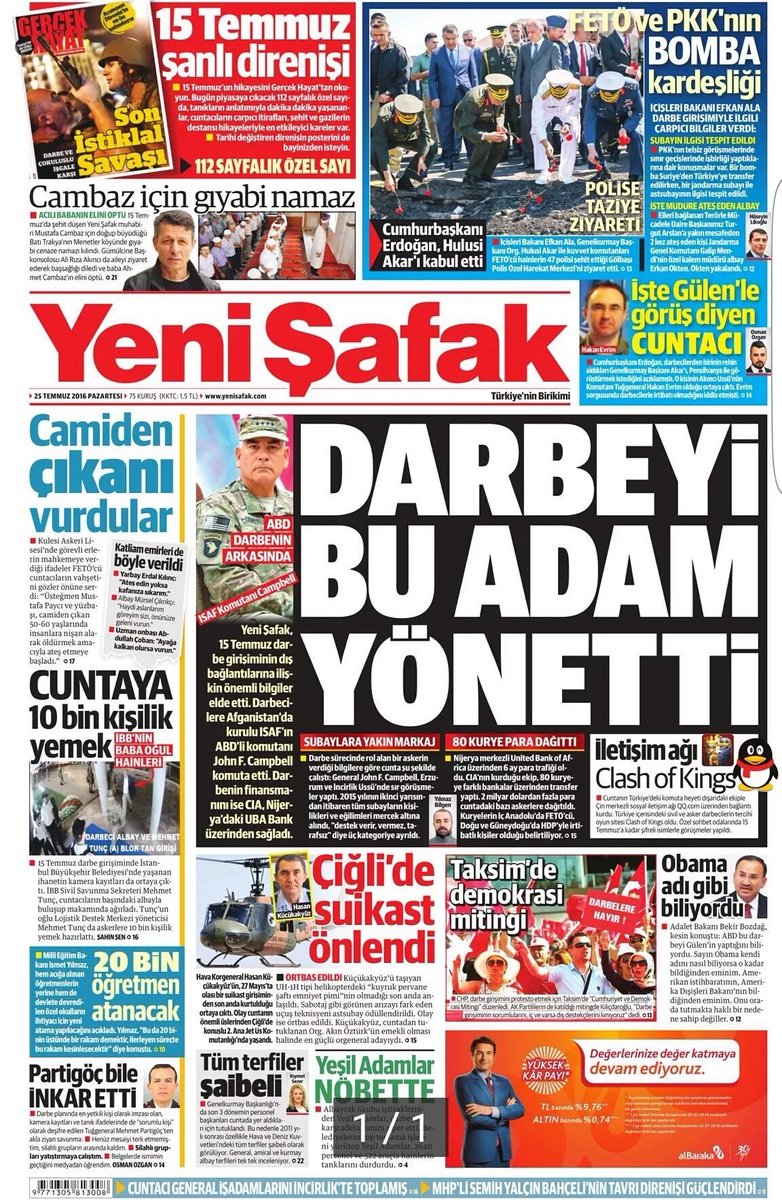 On Sunday, hours before a massive blaze broke out near the NATO base in the western Turkish town of Izmir, Turkish President Recep Tayyip Erdogan’s primary print publication for his Islamist supporters, Yeni Safak, printed the image of NATO International Security Assistance Force Commander Army General John F. Campbell accusing the US military official of plotting the coup against Erdogan in league with US-based cleric Fethullah Gulen.

Hours after the publication of the article, the NATO military base in Izmir became victim of a mass fire that continues to rage on at this hour despite desperate attempts by forces to contain the blaze using helicopter and airplane water drops. The fire threatens US munitions stockpiles at the base which could result in a severe exacerbation of the fire, loss of expensive weaponry, and safety dangers.