U.S. to Russia: We'd like to cooperate with you in Syria. Now do exactly as we say. 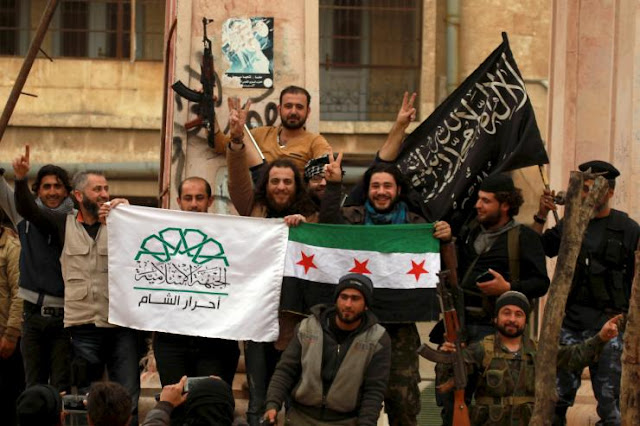 From Daniel R. DePetris, a pundit with no sense of irony whatsoever: America Has No Choice But to Cooperate with Russia in Syria; The National Interest, July 18:

The United States is running out of options in Syria, and the Obama administration is becoming increasingly desperate. That was the broad assessment from the White House's harshest critics on Syria policy upon news that Washington is willing to offer another quid pro quo to Moscow: operational coordination against terrorist groups in exchange for a Russian commitment to stop Bashar al-Assad from attacking Syrian civilians and the moderate opposition. ...

Obviously the United States isn't all that desperate yet. As to the moderate opposition:

Syria's "Moderate Rebels" are not Moderate, not Rebels

July 17, 2016 (Tony Cartalucci - NEO) - Never has the US-led conspiracy against the sovereign state of Syria been so transparent. When recently a Syrian warplane crashed near the Syrian capital of Damascus and its pilot parachuted to safety, he was captured and promptly executed by US-backed "moderate rebels." In what was clearly an inexcusable war crime, the story began to change almost immediately in order to shift the blame.

The rebel group Jaish al-Islam said the pilot had been killed by a Nusra Front fighter while being held at a joint command centre. Jaish al-Islam had earlier said he would be handed over to them because they had shot down his plane.

Jaish al-Islam, which controls territory on the Syrian capital's eastern and northeastern outskirts, had earlier circulated a photo that it said showed the pilot.

The incident highlights several inconvenient facts. First, it exposes the fact that Jaish al-Islam through its own admission maintains a "joint command center" with Jubhat al Nusra - a US State Department designated foreign terrorist organization - meaning that Jaish al-Islam itself is coordinating with and fighting alongside listed terrorists.That Jaish al-Islam receives significant material support from US allies including Saudi Arabia and NATO-member Turkey implicates both US allies in supporting Al Nusra as well - as these resources are demonstrably being shared.

It should also be noted that it was Jaish al-Islam - a militant front openly collaborating with Al Qaeda - that was chosen by the so-called "Syrian opposition committee" to represent them at so-called "peace talks" held by the UN earlier this year.The BBC's article, "Syria conflict: Islamist rebel named opposition chief negotiator," would reveal in January of this year that:

A Syrian opposition committee has named an Islamist rebel as its chief negotiator at peace talks that the UN hopes to convene in Geneva on Monday.

Mohammed Alloush is the political leader of the powerful, Saudi-backed group Jaysh al-Islam (Army of Islam).

This links the rest of the so-called "moderate opposition" directly to foreign-sponsored terrorist organizations as well.Jaish al-Islam and Nusra's joint atrocity earlier this month in the execution of a Syrian pilot also reveals another inconvenient fact - that the US is maintaining a duplicitous double game in which it is supporting terrorists fighting in Syria, using the misnomer of "moderate opposition" to condemn any Syrian and Russian attacks on these terrorist groups, then citing and shifting blame on the listed terrorist organizations operating side-by-side these supposed "moderates" when atrocities unfold.It is a pattern that has - in recent weeks - accelerated, with Al Qaeda-linked terrorist groups dominating fighting across the country portrayed as "moderates" to shield them from joint Syrian-Russian anti-terror operations, while simultaneously disowned as Al Qaeda when atrocities are committed.In reality, Al Qaeda has from the beginning, and still does, represent the vast majority of those fighting Damascus and its allies in Syria. Regardless of superficial labels used mainly by the Western media to delineate specific groups, it is clear, even through official statements by both the wider militant movement and specific groups like Jaish al-Islam itself, that they fight beside and under Al Qaeda's banner.Talking points revolving around the necessity of removing the Syrian government in order to eliminate the extremists of Al Qaeda and the self-proclaimed "Islamic State" are rendered moot when considering that the entire so-called "opposition" is comprised of Al Qaeda and the "Islamic State," along with a myriad of subsidiaries openly fighting alongside both.Business Insider in its article, "The US and Russia may have just sealed Al Qaeda's fate in Syria," would cite corporate-financier funded thinks tanks in concluding:

...the US reportedly has begun urging rebel groups to leave areas where Nusra is present so that Russian warplanes can target them without hitting the mainstream opposition. To that end, the US has demonstrated that it is more willing to work on the Kremlin's terms than on those of the rebels.

Ultimately, many experts say, the opposition groups Russia has relentlessly targeted since late September 2015 are the only actors on the ground capable of challenging the influence Nusra is trying to cultivate among Syria's Sunni Arab population

The bizarre conclusions drawn by the writers at Business Insider openly admit that "rebel groups" are operating side-by-side Al Nusra, but paradoxically claim they are the "only actors on the ground capable of challenging the influence" of Al Nusra.Business Insider, and the think tanks it is providing a platform for, admit that so-called "rebels" are entwined with Al Nusra on the battlefield, but attempting to portray Syrian and Russian strikes on these targets as specific only to the "rebels" and not to the listed terrorists of Al Nusra they are literally shoulder-to-shoulder with in the trenches and collaborating together with inside their "joint command centers."

In reality, the removal of the Syrian government from power will lead to the same predictable and catastrophic power vacuum that has consumed previous victims of US-led regime change including Iraq and Libya.It should be noted that while publications like Business Insider attempt to claim the Syrian government has served as a catalyst for Al Qaeda's rise in Syria, it does little to explain the terrorist organization's spread elsewhere including Afghanistan, Libya, and Iraq. In fact, the only single common denominator shared by all of these nations, including Syria, is the fact that each has been targeted for regime change, division, and destruction by Washington - primarily through the use of  US-backed armed proxies aligned with Al Qaeda.Ironically, it would be the dismantling of the regime on Wall Street and in Washington that would do infinitely more to undermine the viability of Al Qaeda than yet another toppled government and subsequent power vacuum in the Middle East.Tony Cartalucci, Bangkok-based geopolitical researcher and writer, especially for the online magazine “New Eastern Outlook”.