Associated Press, making a liar out of me

On October 10 I had some high praise for Associated Press. On October 11 Tony Cartalucci's Land Destroyer caught AP with its hands in the cookie jar: 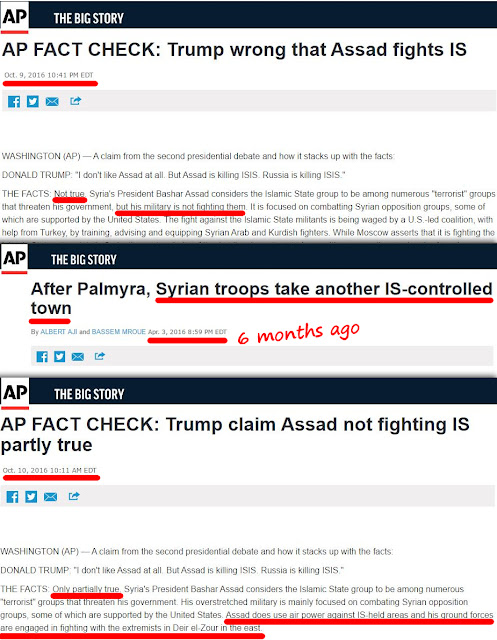 Their "AP FACT CHECK" not only blatantly lied about the nature of military operations carried out by Syrian and Russian forces in their collective battle against terrorist organizations including the self-proclaimed "Islamic State" (ISIS), AP directly contradicted its own reporting on the Syrian conflict where they themselves repeatedly over the last year reported on Syrian and Russian forces fighting ISIS.

When caught lying, AP covertly backtracked and edited their "AP FACT CHECK" without including an editor's note or equivalent. In doing so, they are attempting to sidestep responsibility for intentionally misleading their readers - an activity one would not expect from "one of the most trusted sources of independent newsgathering."

Mischaracterizing the conflict - and specifically lying about Syria and Russia's role in directly confronting ISIS both in the air and on the ground - has cost the lives of thousands as well as regional security and stability. Such lying also has allowed the US to menace the region with the possibility of directly military intervention based solely on claims that Syria and Russia are killing "civilians" rather than fighting ISIS.

All right, AP; internet service has been restored to Aleppo so please kindly get your butts over there and do some real reporting on what's going on there.