"The sun rises without a king"

"As night fell, crowds of mourners remained at the hospital where the King died" 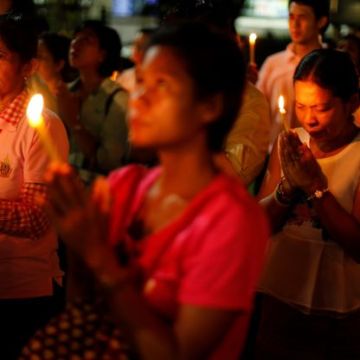 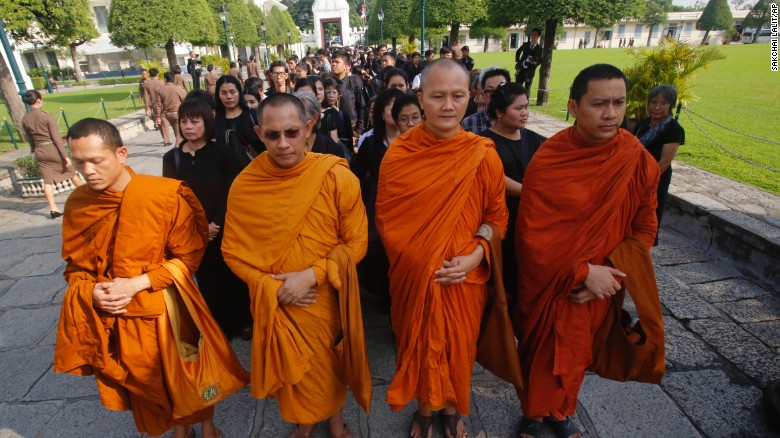 (Bangkok) It's time for Thais to bid King Bhumibol Adulyadej a final farewell.


In a few hours, his body will leave Bangkok's Siriraj Hospital for the Grand Palace, where his funeral rites will be carried out.

Somdej Phrawannarat, a much-revered monk, will lead the procession, the palace said. He will be followed by the Crown Prince Maha Vajiralongkorn.

The King's body and his family will then travel by motorcade to the Grand Palace, where mourners have already begun to claim spaces to watch the historic event. Many have been camped out as early as midnight.

"I couldn't sleep and I didn't want to sit around at home, I had to do something as I was feeling so sad," says Patarapong Chankaw, 28. "So I came to the grand palace to be with other mourners."


He's been at the Grand Palace since 5 a.m. local time and plans to stay until the procession is over.

Once the body arrives at the palace, it will undergo a funeral bathing ceremony -- a traditional rite in Buddhist culture.

Thais have also lined up for the opportunity to pour water on a portrait of the King inside the palace grounds -- a way for the masses to simulate the symbolic royal bathing of the King's body.

"This is an important moment in my country's history," said 36-year-old Anon Pairot, who was one of those that attended the public gathering.


"I wanted to be a part of it and join other Thais as we mourn our King."


The sun rises without a King

As dawn broke Friday, the streets were awash with grief as the reality of the Thursday evening passing of the King began to set in.

The tide of pink and yellow of the past few days, worn as a show of support for his majesty, has now made way for a sea of black.

Friday has been declared a public holiday for government offices by the Thai cabinet, according to an announcement on state television.

Some of the normally bustling streets of Bangkok were quiet as stone-faced Thais set out on their morning commutes.

"Why we love our king"