"Marine holds both hands up to quiet crowd so searchers can listen for any sign of life. Hundreds gathered fall into pin-drop silence" 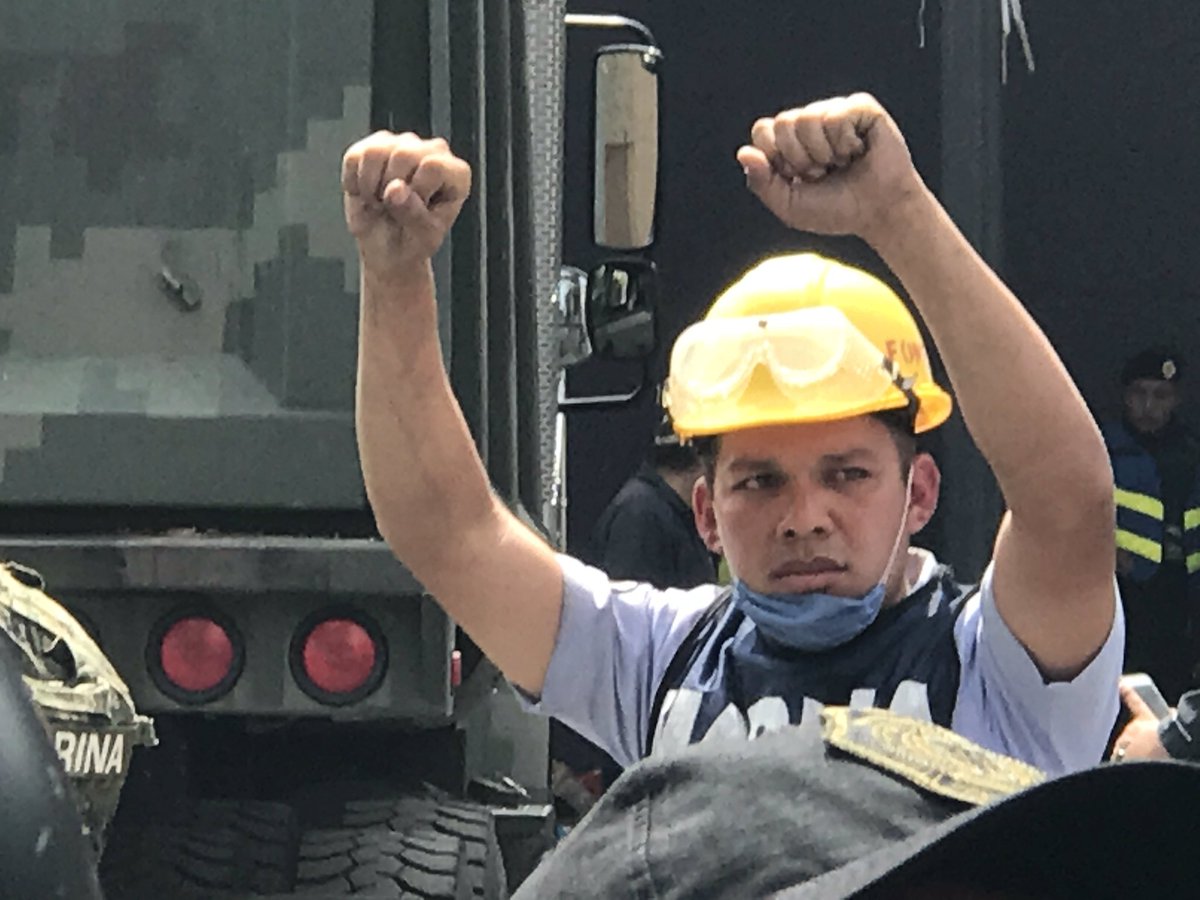 MEXICO CITY -- A delicate effort to reach a young girl buried in the ruins of her school stretched into a new day on Thursday, a vigil broadcast across the nation as rescue workers struggled in rain and darkness to pick away unstable debris and reach her.

The sight of her wiggling fingers early Wednesday became a symbol for the hope that drove thousands of professionals and volunteers to work frantically at dozens of wrecked buildings across the capital and nearby states looking for survivors of the magnitude 7.1 quake that killed at least 245 people in central Mexico and injured over 2,000.

Mexico's navy announced early Thursday it had recovered the body of a school worker from the Enrique Rebsamen school, but still had not been able to rescue the trapped child.

Rescuers removed dirt bucketful by bucketful and passed a scanner over the rubble every hour or so to search for heat signatures that could indicate trapped survivors. Shortly before dawn the pile shuddered ominously, prompting those working atop it to evacuate.

"We are just meters away from getting to the children, but we can't access it until it is shored up," said Vladimir Navarro, a university employee who was exhausted after working all night. "With the shaking there has been, it is very unstable and taking any decision is dangerous."

Mexico City Mayor Miguel Angel Mancera said the number of confirmed dead in the capital had risen from 100 to 115. An earlier federal government statement had put the overall toll at 230, including 100 deaths in Mexico City.

Mancera also said two women and a man had been pulled alive from a collapsed office building in the city's center Wednesday night, almost 36 hours after the quake.

"They are (there) all day, the families around the building. So they are very worried," volunteer Alex Osorio, a banker who helped save four people from the rubble of a collapsed office building, told CBS News correspondent Manuel Bojorquez.

President Enrique Pena Nieto declared three days of mourning while soldiers, police, firefighters and everyday citizens kept digging through rubble, at times with their hands gaining an inch at a time, at times with cranes and backhoes to lift heavy slabs of concrete.

"There are still people groaning. There are three more floors to remove rubble from. And you still hear people in there," said Evodio Dario Marcelino, a volunteer who was working with dozens of others at a collapsed apartment building.

A man was pulled alive from a partly collapsed apartment building in northern Mexico City more than 24 hours after the Tuesday quake and taken away in a stretcher, apparently conscious.

In all, 52 people had been rescued alive since the quake, the city's Social Development Department said, adding in a tweet: "We won't stop." It was a race against time, Pena Nieto warned in a tweet of his own saying that "every minute counts to save lives."

But the country's attention focused on the collapsed Enrique Rebsamen school on the city's south side, where 21 children and five adults have now been confirmed dead.

Hopes rose Wednesday when workers told local media they had detected signs that one girl was alive and she speaking to them through a hole dug in the rubble. Thermal imaging suggested several more people might be in the airspace around her.

A volunteer rescue worker, Hector Mendez, said cameras lowered into the rubble suggested there might be four people still inside, but he added that it wasn't clear if anyone beside the girl was alive.

Dr. Alfredo Vega, who was working with the rescue team, said that a girl who he identified only as "Frida Sofia" had been located alive under the pancaked floor slabs.

Vega said "she is alive, and she is telling us that there are five more children alive" in the same space.

But the navy said the identity of the girl is unclear because no relatives of the child have come forward with information.

The debris removed from the school changed as crews worked their way deeper, from huge chunks of brick and concrete to pieces of wood that looked like remnants of desks and paneling to a load that contained a half dozen sparkly hula-hoops.

Rescuers carried in lengths of wide steel pipe big enough for someone to crawl through, apparently trying to create a tunnel into the collapsed slabs of the three-story school building. But a heavy rain fell during the night, and the tottering pile of rubble had to be shored up with hundreds of wooden beams.

People have rallied to help their neighbors in a huge volunteer effort that includes people from all walks of life in Mexico City, where social classes seldom mix. Doctors, dentists and lawyers stood alongside construction workers and street sweepers, handing buckets of debris or chunks of concrete hand-to-hand down the line.

At a collapsed factory building closer to the city's center, giant cranes lifted huge slabs of concrete from the towering pile of rubble, like peeling layers from an onion. Workers with hand tools would quickly move in to look for signs of survivors and begin attacking the next layer.

"There are sounds (beneath the rubble), but we don't know if they are coming from inside or if it is the sound of the rubble," Herrera said.

Not only humans were pulled out.

Mexico City police said rescue workers clearing wreckage from a collapsed medical laboratory in the Roma neighborhood found and removed 40 lab rabbits and 13 lab rats used by the firm that had occupied the building, now a pile of beams and rubble.

In addition to those killed in Mexico City, the federal civil defense agency said 69 died in Morelos state just south of the capital and 43 in Puebla state to the southeast, where the quake was centered. The rest of the deaths were in Mexico State, which borders Mexico City on three sides, Guerrero and Oaxaca states.