At least 32 people were killed after a magnitude-8.1 earthquake rocked Mexico late Thursday night, leveling buildings in southern Mexico, triggering tsunami warnings in several countries and causing people to flee into the street, buildings to sway and lights to go out in Mexico City, some 650 miles from the quake's epicenter.

Mexican President Enrique Pena Nieto, who said the quake was 8.2 in magnitude, called it the strongest the country has seen in a century. The U.S. Geological Survey measured it at 8.1 magnitude.

Pena Nieto said in a series of tweets on Friday that over 200 people had been injured and that over 260 aftershocks had hit the country since the initial quake, the most powerful of which was measured at magnitude 6.1.

The powerful temblor occurred some 50 miles southwest of Pijijiapan, Mexico, off the coast of the southern Mexican state of Chiapas, at 11:49 p.m. local time (12:49 a.m. ET), according to the USGS. The depth of the earthquake was 43 miles, the USGS said.

At least 32 people have died, according to the Associated Press.

Emergency responders searched for survivors amid the rubble of collapsed buildings in the town of Juchitan in Oaxaca. Juchitan suffered extensive damages, including the partial destruction of a municipal building.

Local officials told Mexican daily El Universal that at least 50 homes had been destroyed and that at least 17 fatalities so far took place there.

UPDATE 3:15 AM EDT
The Sun (U.K.) is reporting the magnitude as 8.4, that 5 people have been reported killed by the quake, and that its force "has sent buildings tumbling to the ground."  The report has photographs and video.
END UPDATE

A magnitude-8.2 earthquake rocked southern Mexico late Thursday night, causing people to flee into the street, buildings to sway, and lights to go out in Mexico City.

The powerful quake occurred 59.7 miles southwest of Pijijiapan, Mexico, off the coast of Chiapas at 11:49 p.m. local time (12:49 a.m. ET), according to the U.S. Geological Survey. The depth of the earthquake was 22 miles, the USGS said.

Mexico's Pacific coastal areas -- as well as the coastlines of Guatemala, Honduras, El Salvador and Costa Rica -- are now on alert for tsunami waves.

"Based on all available data Hazardous tsunami waves are forecast for some coasts," the National Weather Service Tsunami Warning Center said in an alert. "Tsunami waves reaching more than 3 meters above the tide level are possible along some coasts of Mexico."

Mexico City (AP) -- A massive earthquake hit off the coast of southern Mexico late Thursday night, causing buildings to sway violently and people to flee into the streets in panic as far away as the capital city.
The U.S. Geological Survey said the quake had a magnitude of 8.0 and its epicenter was 165 kilometers (102 miles) west of Tapachula in southern Chiapas state not far from Guatemala. It had a depth of 35 kilometers (22 miles).

The U.S. Tsunami Warning System said hazardous tsunami waves were possible on the Pacific coasts of several Central American countries. Waves were possible within the next three hours for Mexico, Guatemala, El Salvador, Costa Rica, Nicaragua, Panama, Honduras and Ecuador, it said. There was no tsunami threat for the U.S. West Coast.
Civil protection officials were checking for damage in Chiapas, but the quake was so powerful that frightened residents in Mexico City more than 1,000 kilometers (650 miles) away fled apartment buildings, often in their pajamas, and gathered in groups in the street.
Around midnight buildings swayed strongly for more than minute, loosening light fixtures from ceilings. Helicopters crisscrossed the sky above Mexico Dity with spotlights. Some neighborhoods kept electricity while others remained in darkness. 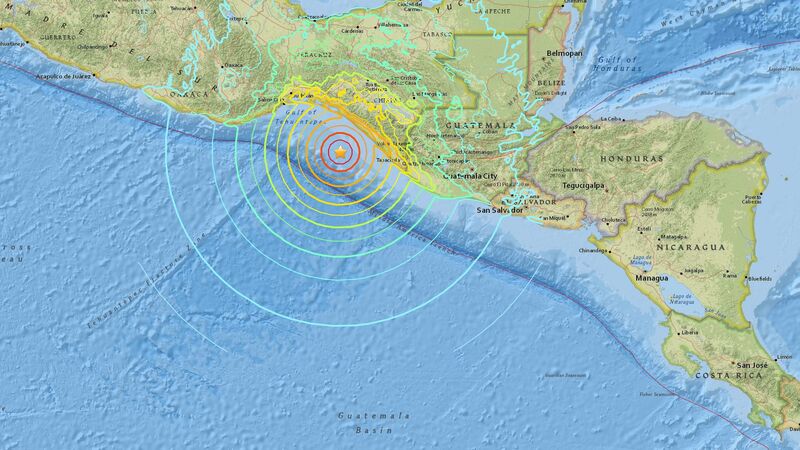