Will there ever be justice for the victims of 9/11?

Over the years, successive [American] administrations have made strenuous efforts to suppress discussion of Saudi involvement in the September 11 attacks, deploying everything from abusive security classification to the judiciary to a presidential veto. Now, at last, we stand a chance of discovering what really happened, largely because of a court case.
-- From Crime and Punishment: Will the 9/11 case finally go to trial?; Andrew Cockburn; September 10, 2017; Harper's

Two years before the [9/11] airliner attacks, the Saudi Embassy paid for two Saudi nationals, living undercover in the US as students, to fly from Phoenix to Washington “in a dry run for the 9/11 attacks,” alleges the amended complaint filed on behalf of the families of some 1,400 victims who died in the terrorist attacks 16 years ago.

The court filing provides new details that paint “a pattern of both financial and operational support” for the 9/11 conspiracy from official Saudi sources, lawyers for the plaintiffs say.

In fact, the Saudi government may have been involved in underwriting the attacks from the earliest stages — including testing cockpit security. 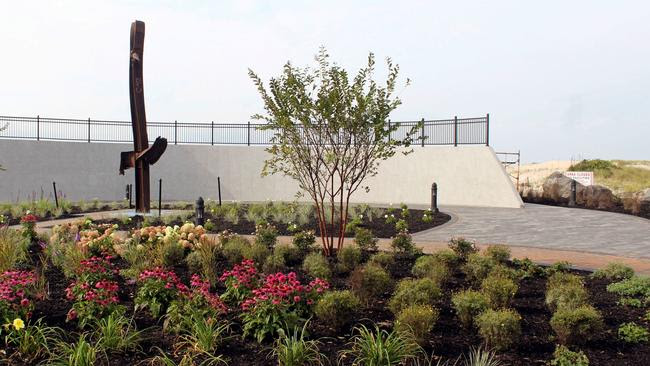 "A piece of steel from the World Trade Center stands at a new memorial that will be dedicated at Point Lookout, N.Y., on September 11, 2017." (Frank Eltman / Associated Press)

In New York alone, an estimated 60,000 to 70,000 responders worked at ground zero, sometimes for weeks, in the aftermath of the attacks. They included police officers, firefighters, construction workers and volunteers.

9/11 responders who became ill from toxic exposure now have a monument to their heroism
By Matt Hansen
September 10, 2017
The Los Angeles Times

Commemorations for the anniversary of the Sept. 11 terrorist attacks began in New York late last week as they have for multiple years, with twin beams of light piercing the night sky, a tribute to those lost in the World Trade Center that could be seen across the region.

Yet even 16 years after the 2001 attacks, the list of the fallen continues to grow as police officers, firefighters, first responders and recovery workers succumb to illnesses linked to their work in the aftermath of the attacks.

Researchers estimate that the choking dust that coated the ground zero recovery site — and persisted in the air for days afterward — contained a hazardous mix of airborne particles, including aluminum, asbestos, glass and the remnants of burned jet fuel. Similar hazards affected workers at the Pentagon and the Shanksville, Pa., crash site where the hijacked United Flight 93 was brought down.

Scientists studying exposure to those airborne hazards have linked them to lung disease, asthma and cancer, and the federal government has taken steps in recent years to help tackle these lasting health challenges.

On Monday, a memorial on Long Island will be dedicated to both the nearly 3,000 people who lost their lives on Sept. 11, and those who died of illnesses stemming from the attacks and their aftermath.

How many people have experienced health complications due to effects from the Sept. 11 attacks?

In New York alone, an estimated 60,000 to 70,000 responders worked at ground zero, sometimes for weeks, in the aftermath of the attacks. They included police officers, firefighters, construction workers and volunteers. The numbers are less clear for responders to the attack on the Pentagon and the crash at Shanksville, although hundreds of local police and fire officials worked in the aftermath of both scenes. Additionally, thousands of people in lower Manhattan may have been exposed simply by returning to their apartments or commuting to work in the days after the attacks.

In June, the World Trade Center Health Program, the federally funded organization that helps provide medical treatment for people affected by the attacks, counted more than 67,000 responders and 12,000 attack survivors as enrollees. The program receives hundreds of new participants each month, including nearly 400 new enrollees in June alone. Since the program began in 2011, more than 1,300 members have died, although not all deaths could be directly attributed to Sept. 11-related illnesses.

What type of conditions are 9/11 responders and survivors experiencing?

The majority of enrollees in the federal program suffer from breathing-related issues, mental health complications or cancer. Yet the program covers a wide array of challenges that arise in the wake of trauma, including asthma, post-traumatic stress disorder and lower back pain.

Scientific studies continue to find a link between Sept. 11 responders and high risks of health problems. A 2012 study from the New York Department of Health found that responders to the World Trade Center attacks were at a higher risk of developing prostate and thyroid cancer, and a study in 2011 found a 19% higher rate of cancer among New York firefighters who responded to the attacks.

What help can responders and survivors receive for their ailments?

The federal government funds both a health and a compensation program for Sept. 11 assistance. While the World Trade Center Health Program provides medical treatment, the federal Victim Compensation Fund provides financial help for victims’ families, first responders and survivors of the attacks.

Though the compensation fund originally ran from 2001 to 2004, President Obama reactivated it in 2011 after a congressional battle over funding for the program, with fiscally conservative Republican senators filibustering the bill in 2010. Obama signed a bill in 2015 that will keep the fund operating until 2020.

By August of this year, the fund had granted eligibility to more than 17,000 claims out of more than 30,000 filed, and had paid out more than $3 billion in compensation, more than the $2.7 billion Congress originally approved in 2011. Claims covered responders at all three sites as well as people living and working in lower Manhattan at the time of the attack.

How do advocates for responders and survivors feel about the care they are receiving?

Advocates for responders and victims say that although Sept. 11 remains a defining event for the nation, the fate of the people directly affected by the attacks is sometimes forgotten.

“People in America know the story of 9/11,” said Ben Chevat, executive director of 9/11 Health Watch, a nonprofit watchdog group. “What’s really not well known or understood are the challenges facing so many to this day.”

Though Chevat and his fellow advocates are pleased that the federal government has taken responsibility for healthcare and compensation, he said, there remains a backlog of compensation cases and the need for more conditions to be covered, such as autoimmune disorders linked to the response.

John Feal, who heads the FealGood Foundation, a nonprofit that advocates for first responders, worries that there are still too many responders and survivors who aren’t aware of the federal programs.

The reality is that more and more people are getting sick and dying,” he said. He is particularly concerned about the coming emergence of asbestos cases, which he noted can take up to 20 years to appear.

He estimates there are about 10,000 additional responders who are eligible for the program but not enrolled, and Chevat believes there may be more than 30,000 who are still eligible.

“The guys in Texas, Oregon and California who went to New York for the cleanup and recovery for 10 months, it’s hard to reach them,” Feal said.

Though the cause has high-profile backers, including comedian Jon Stewart, Feal worries the message isn’t reaching people outside of the Northeast.

“A year and a half ago, I traveled to 10 states in 10 months and met first responders,” he said. “It’s an uphill battle and an obstacle every day to ensure people get enrolled in the program.”

Then one day many years after 9/11 the last American Soldier walked back into the desert-and we began to win.

And we killed them all.