Guess what? Urban flooding can make its own rain system. This is not good news. 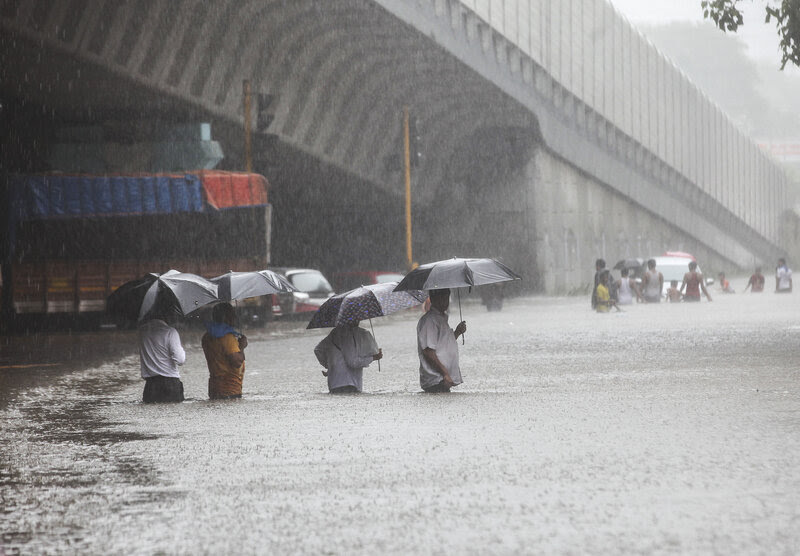 Nope, not Houston either. São Paulo 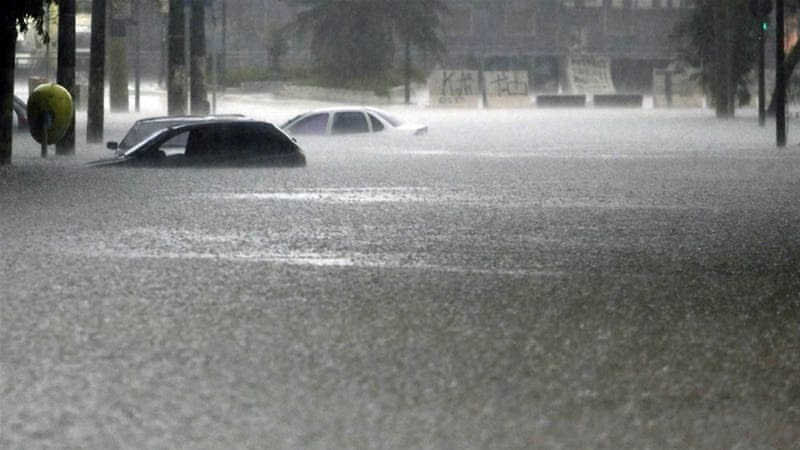 No no; that's Karachi last week 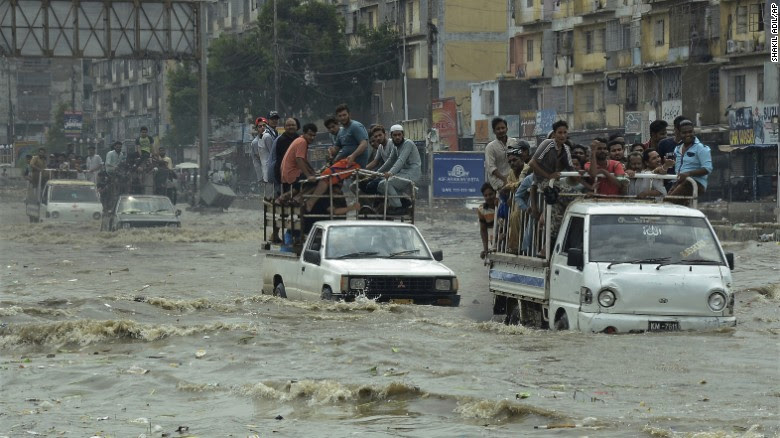 We can tell from the Chinese banner it's not Houston 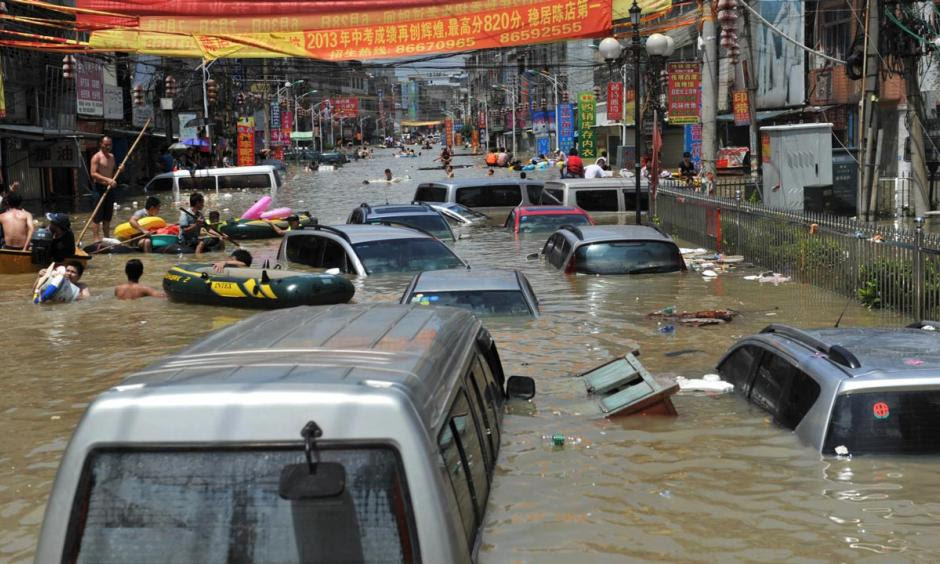 No, that's an artist's idea of the Biblical Great Flood 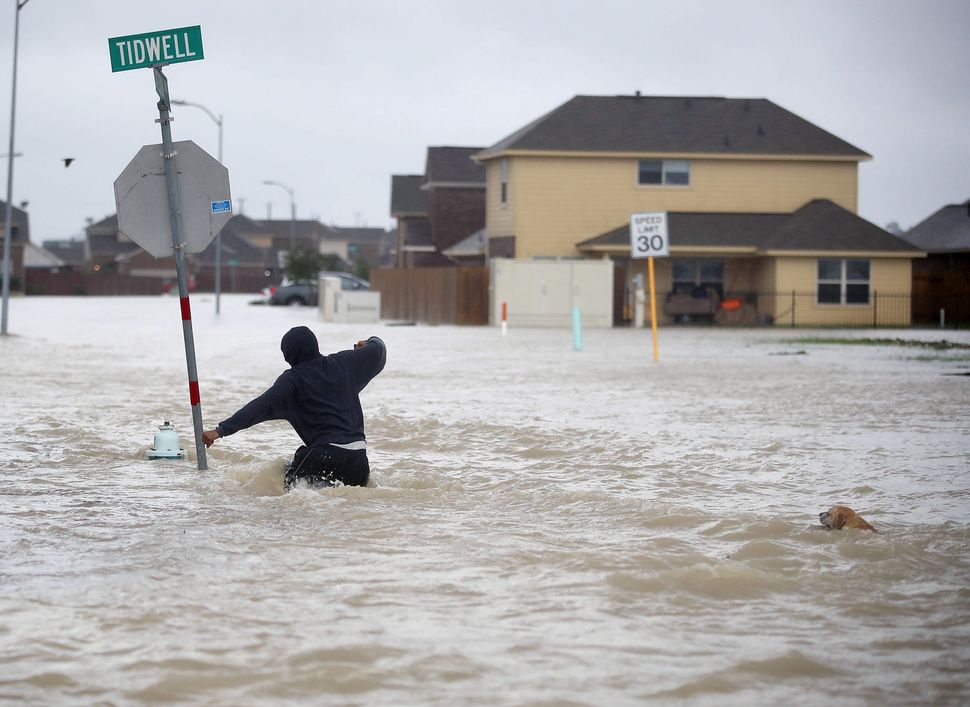 You will note a certain sameness about the photographs. That's because rain is the same wherever you go. If it falls on impermeable surfaces it's going to back up. If this happens in a city then all debris on the streets whirls and swirls in the rainwater into storm drains, completely clogging them, so the rainfall gets even more backed up.

This is how even a few inches of rain can flood a city.

So what's really the same about all the photographs is that the flooding you see is a kind of optical illusion created by the fact that the rainfall had nowhere to go but up. Indeed, a big reason Brazilians didn't react as quickly as they should have to the fast-depleting reservoirs in and near São Paulo was that they just couldn't believe there was a dearth of water given all the flooding in the city. They assumed the big floods meant huge rainfall totals were falling.

A similar optical illusion has been at work in New Orleans, which allowed at least one rascal official to get away with blaming climate change for repeated post-Katrina flooding in the city. It turned out the pumping system had never been fully operational even before it completely broke down this August. (No, Houston doesn't have a pumping system.)

Granted, the rainfall in São Paulo in the above photograph, taken in February 2015, was actually significant, as Al Jazeera reported:


Downpours have wreaked havoc across Sao Paulo, causing widespread flooding. Almost 100mm of rain fell in little over an hour on Wednesday, turning streets and avenues into rivers.

Sao Paulo’s Emergency Management Centre recorded 96mm of rain in just 60 minutes. Dozens of cars were submerged, trapping their occupants as the water rose quickly around them.
[...]
The severe floods have arrived during what has become the worst drought to hit Sao Paulo in more than 80 years.

Ironically, it is still not enough to replenish the city’s reservoirs to any great extent.

Unfortunately, the main reservoir is located 60km to the north and did not see anywhere near enough useful rainfall during the storm.

There are further showers in the forecast across the area over the next few days, but the city is likely to face water rationing over the coming months, because water levels are likely to remain critically low.

And the rain that inundated Houston during Harvey was considerable.

But if they were sticking a rain gauge in the plugged-up streets of Sao Paulo and going by that alone, it would have given a skewed idea of the total rainfall. And if they'd used a rain gauge at say, Tidwell Street in Houston during the first hour of Harvey's rains, then stuck a gauge in the prairie west of Houston, there would have been very different readings -- at least of the flood level. That's because a prairie can absorb a lot of rainfall. An August 29 Associated Press report (Houston drainage grid 'so obsolete it's just unbelievable') mentions that "studies show prairies can absorb as much as 11 inches of rain per hour.

I'm not certain the particular prairie outside Houston can absorb that much rain every hour; an August 29 Washington Post report (How ‘Wild West’ growth may have led to devastating flood in Houston) noted that Houston:


is built on a low-lying coastal plain on “black gumbo” -- clay-based soil that is among the least absorbent in the nation.

Of course the soil could be different in the prairie outside Houston. But most certainly prairie land has permeability, which ground covered with impervious materials does not. And prairies contain vegetation that keeps the soil aerated and thus able to absorb rain better than farmland abandoned in regions prone to severe drought. The soil in such regions can become like cement.

So far all this is self-evident. What is not readily evident, what it took science to discover, is that floodwaters from rain that don't readily drain can create conditions that beget more rain.

How can this happen?

From a discussion between Mark Fischetti and meteorologist Dr Jeff Masters published August 28 in Scientific American (Why Hurricane Harvey became so extreme):


How can Harvey produce such extreme rainfall even though it is no longer over the ocean?

The answer to this is fascinating. Normally a hurricane pulls moisture up from the ocean and releases it as rain all around the storm’s area, particularly in the northeastern quadrant. But Harvey has dropped so much water over such a large area of southeastern Texas that the storm is pulling that water back up into itself and dumping it again as more rain. The flood area is so far and wide that it is acting like part of an ocean, feeding warm moisture up into Harvey.

“You only need about 50 percent of the land to be covered with water for that to happen,” Masters said. “Obviously we have more than that in Texas.”

Could Harvey exist as a self-perpetuating rain machine over land?

Masters said meteorologists cannot answer this question yet. “If it were to stay perfectly still, could it maintain itself for a long period of time?” he asks. “That’s an interesting theoretical question. We just don’t know.”

NPR has reproduced an interactive series of satellite photographs showing various towns in Texas before and after the flooding from Harvey. Without looking at the differences in the before/after photos it's hard to imagine the scope of the flooding.

Now of course there is a difference between rain and flooding, so if flooding was spilling from Houston into the prairie, the prairie wouldn't have been able to absorb the water as quickly as during a rainfall. But the point is that the satellite photos bring home the large amount of land covered by the flooding during Harvey. So while we tend to speak of such bodies of water as "floodwaters," they also form a lake, an artificial lake. It is this lake that under certain conditions can create a weather system that keeps dumping rain on the same area.

How common is this? Obviously common enough for Masters to treat the phenomenon as settled science. And note that the artificial lake doesn't need to drown an entire region for the phenomenon to kick in; again, Masters observed that only about 50 percent of the land needs to be covered with water for it to happen.

And so we arrive at another striking similarity about the photographs I featured. With the exception of the city in China, which was one of many flooded cities in the nation at the time, all these flooded urban environments are megacities. Which is to say that when plugged up by flooding and debris during rains the megacities would generate what are in effect large lakes.

So we might speculate that until the lakes drain off in some fashion, the megacities would be susceptible to the phenomenon Masters outlined if wind conditions were right.

Could it be this is how the Biblical flood happened and other floods from epic rainfall in ancient times, such as the one described in the story of Gilgamesh?

Of course there was no asphalt in those days to make the city streets impervious to drainage, and I don't think there was anything like concrete paving, although I've never looked into the question.

But if all those rainfall-induced floods struck at urban environments, it would be interesting to learn how fast those cities turned into artificial lakes during heavy rains, which could have happened if they had crummy drainage. Could the flooded cities have attracted a 'perpetual' rain phenomenon, one that gave rise to floods that wiped out virtually all life in the region of the rainfall?

Well, all this is speculation from way out on a limb, so to return to firm ground there is the example of Houston before us. We know that the city turned into a lake and that this gave rise to the strange phenomenon noted by Jeff Masters.

Yet the phenomenon still isn't well known. Yesterday Seth Borenstein writing for the Associated Press sought to describe what made Harvey such a nasty storm, but he only knew parts of the story including this one:


If it had only continued a bit farther, over northern Texas, Harvey would not have been as wet. But by stalling near the coast, the storm was allowed to draw more and more moisture from the gulf and sustain extraordinary rainfall rates, including more than 4 inches per hour over the Beaumont-Port Arthur area, Masters said.

Ironically Borenstein quoted Masters at one point in the report, but obviously he was unaware of what Masters had told Scientific American.

Until more people know that a rainstorm can also draw moisture from its own rainfall if the rain is pooled in large enough amounts, a great danger from urban flooding will go unaddressed.

As cities continue to expand, as impermeable materials in those cities cover more and more ground, we are challenging Nature to improvise with its weather systems. That can be a terrible idea.