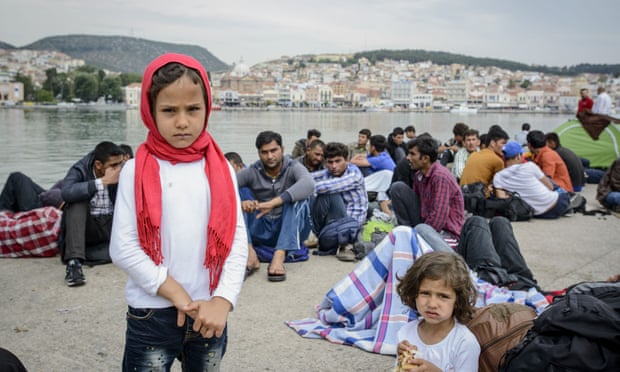 Don't you dare laugh Pundita because it's not a damn bit funny. But it's just [laughing] -- all these analysts who've been saying the Greeks can't possibly wheedle more money out of the Troika. They possibly might.

UN would struggle to cope with refugees in Greece if banks fail
by Patrick Kingsley Migration Correspondent
9 July 2015 - 04.45 EDT
The Guardian

Greek islands have received 9,000 refugees in past week alone, says United Nations, and its ability to pay for humanitarian supplies is at risk

The UN refugee agency says it will struggle to provide basic supplies to a wave of refugees in the Greek islands if the country’s banking system fails in the coming days.

Greece’s islands have in recent weeks overtaken Italy as the primary entry point for refugees to Europe, with nearly 80,000 arriving this year from Turkey – a rate six times the equivalent figure from 2014, according to the UN.

More than 9,000 have arrived in the past week alone, and a UN spokeswoman on the island of Lesbos, which has taken in around half of the arrivals, says the organisation’s ability to give them items as basic as bottles of water and sleeping mats is at risk.

Laura Padoan said: “The precarious financial situation means that if we can’t access cash readily, it could threaten our programmes because we pay our suppliers through Greek accounts. We do depend on having ready cash. A lot of programmes depend on cash purchases of Greek goods.”

The Athens government has been overwhelmed by the unprecedented wave of refugees on its eastern islands, many of which lie just a few miles from the Turkish coast, allowing refugees largely from the wartorn countries of Syria, Iraq and Afghanistan to risk the short journey in rubber boats. As many as 19 are feared to have drowned in recent days.

Greek officials are struggling to process the refugees in a timely manner, meaning they are unable to quickly reach the mainland and further stretch resources on the islands. Some islanders have set up their own makeshift camps for migrants.

The government’s own camps are vastly overcrowded – with around 5,000 refugees squeezed into squalid conditions at the Kara Tepe camp on Lesbos. In at least some camps, the government has been unable to pay local caterers to provide food to the refugees, forcing the army to step in to provide emergency food at one camp on the island of Samos on Tuesday.

In the Greek parliament this week the migration minister, Tasia Christodoulopoulou, admitted the situation could lead to “imminent riots by people demanding food”.

Refugees are already losing patience, Padoan said. “There have been fights that have broken out in Kara Tepe. People are getting really frustrated. There’s a lot of tension.”

As well as a bottleneck on the islands, there is also a buildup of stranded migrants at Greece’s northern borders. In recent months, refugees trying to reach other European countries have been able to walk into Macedonia, and then through the Balkans. But in recent days, the Macedonian authorities have moved to block the passage of most refugees, leading to an increasing number of migrants in limbo in the northernmost towns of Greece.

With Hungary – the next EU country on the Balkans migrant trail – trying to make it harder for migrants to enter its borders, there are fears many will decide to stay put in Greece, further stretching the country’s resources.

Another reason refugees could be forced to remain in Greece is that reported restrictions by international money transfer companies are preventing refugees being wired the large sums of money most rely on to fund their onward journeys.