Tiete River seen from a bridge


This isn't quite the bubble bath most of us are used to having. What you see in the video above is actually toxic foam choking the Tiete River in Sao Paulo, Brazil, on Tuesday.

According to National Geographic, the foam is caused mainly by untreated household runoff that flows directly into the river through waste pipes.

The foam forms when water mixes with phosphate and phosphorus—ingredients found in products such as biodegradable detergents, Malu Ribeiro, water-program coordinator for the local environmental nonprofit SOS Mata Atlantica, told National Geographic in 2010 when a similar instance occurred.

The foam seems harmless, but officials say it is very toxic. Residents also complain that it smells.

Darn right the foam is very toxic, and it's been there for decades; it just becomes more evident when the river is low during a drought.

How does the water management agency mask the situation otherwise?  Here's how: 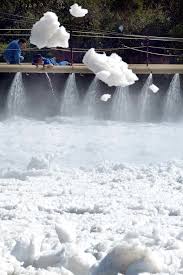 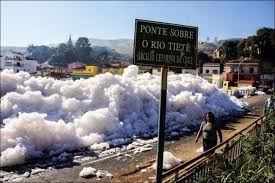 How much water do they expend on trying to keep the bubbles in line? Who knows?

Yes, this is the same Sao Paulo in Brazil that's been going through a devastating drought -- the very same megacity. So there is a somewhat circular problem. The city is suffering from a water shortage crisis but the residents can't drink the pretty abundant water from the Tiete River that runs through the city for obvious reasons, but then they have to use water to stop the bubbles in the river from attacking downtown Sao Paulo.

Now as you can learn from Wikipedia's articles on the Tiete River and Water management in the Metropolitan Region of São Paulo, the pollution of the river isn't only due to soapsuds. The pollution is a brew fairly typical of cities that skyrocketed in population with little or no effort at sewage management.

However, there is a problem with the bubbles that isn't mentioned in Wikipedia, nor by the water expert at Stanford University who advises Sao Paulo's government. That is the problem of people using Brazil's rivers as their washing machines, as I mentioned in the first Soap Opera.

Specifically, they wash their clothes with detergents made by the British-Dutch company Unilever, which at least at the time this company memorandum was written, had 81 percent of the detergent market share in Brazil. Yet as the memo makes clear Unilever is aware that many low-income Brazilians use the detergents to do laundry in the country's rivers and ponds -- a practice that goes on throughout the 'developing' world.

In other words, once low-income peoples the world over abandoned traditional laundering methods in favor of detergents, the rivers in country after country around the world began to be destroyed.  The destruction occurred through a process called eutrophication -- the depletion of oxygen in freshwater sources through the large addition of nitrates or phosphates from detergents, fertilizers, or sewage but mostly phosphates.

So sewage treatment isn't the only answer.

Meanwhile, as the Stanford expert points out,  most residents of Sao Paulo don't drink the tap water because it's so polluted.

What do they do for drinking water? It seems they drill private wells if they can afford it, which is destroying the already badly depleted water table, or buy bottled water.  The rest drink the toxic tap water, which one assumes puts a huge strain on the city's health care system.

As to how long the detergent manufacturers have been aware that phosphates in their products were killing rivers -- the scientific basis for banning phosphates from detergents was established as early as the 1970s.  So I'm sure you'll be thrilled to know that Unilever's competition in Brazil -- Proctor & Gamble -- announced in January 2014 it's going to phase out phosphates in their detergents:


A host of leading laundry detergent brands, including Ariel, Tide and Ace, will have phosphates eliminated within two years, Procter & Gamble announced Monday.

The consumer goods giant said that all of its laundry detergents no longer would feature the material, after the company successfully developed a new formula that it maintains will deliver an improved cleaning performance without reliance on phosphates.

Phosphates long have featured in laundry detergents, but the chemical widely has been blamed for polluting freshwater ways, where an excess of phosphates can lead to algal blooms and oxygen deficits that harm biodiversity.

There are also concerns that with demand for phosphate-based fertilizers continuing to climb globally, the global economy could face a phosphate supply crunch in the coming years.

P & G provided few details on how it had managed to develop a new generation of detergents that could work effectively without phosphorus, but insisted that the new pledge was part of a long-running strategy.

"P & G has been gradually reducing the consumption of phosphates since 2005," said Gianni Ciserani, group president of global fabric and home care. ..."

As for Unilever, supposedly they removed phosphates from their detergents in 2011. But it's an interesting story so I'll republish it here:

Washdays are contaminating our environment, a Water Research Council report has found. But chemical giant Unilever, which controls 80% of the washing powder market [81 percent according to the memo I linked to], has taken a big step to improve the situation.

The council report found that phosphates in detergents are polluting the country’s waterways and contributing to the clogging up of dams such as the Hartbeespoort with poisonous blue-green algae, which kills other life.

The finding comes against the background of a study by water-quality scientist Bill Harding that links the algae to motor neurone disease.

Phosphates’ role in washing powders is to “soften” the water to facilitate the washing of clothes.

Detergent manufacturers are replacing the phosphates with zeolites and salts, but consumers often complain because they leave a residue on clothing. The council cited Unilever as saying that, based on international trends, it was preparing to switch to zero-phosphate detergents.

Once the decision was taken to implement the switch adapting its production processes would take between three and five years. But the company surprised SABC environmental programme 50/50 last week when it said that its washing powders were now entirely phosphate free.

Unilever manufactures well-known brands such as Skip, Surf, Sunlight and Omo. A visit to a Johannesburg supermarket showed that most of these brands still had phosphates listed as a component of their washing-powder formulae and there is nothing on Unilever’s website to indicate a policy change.

But 50/50 invited the Mail and Guardian to observe the testing of Unilever washing powders by the Council for Scientific and Industrial Research and all the products were indeed shown to be free of phosphates.

Asked why the eradication of phosphates had been kept secret Ross Plumbley, vice-president of research and development at Unilever in Durban, told 50/50 that South African consumers did not choose products based on environmental concerns.

“We typically had between 16% and 22% [phosphates] in our formulations. We reduced this in all formulations to 2% in October 2010 and then finally removed it altogether at the end of the year.”

Plumbley said the company had not publicised the initiative because, although it was a positive step in reducing the phosphate load in the environment, “it will not solve the significant challenges South Africa is ­facing with regard to water quality, availability, or the issue of eutrophication, which is complex and challenging.”

Eutrophication is the creation of a nutrient-rich habitat for blue-green algae. Water pollution by phosphates leads to the eutrophication of lakes and streams and is a huge problem worldwide.

In normal circumstances waste-water treatment plants remove phosphates before they enter the river system, but a large percentage of South Africa’s plants are not functioning properly.

The council report found disturbing amounts of phosphate in the dams monitored. “There can be little argument concerning the impact phosphates have on the water resources in South Africa,” the report said, adding that the removal of such chemicals from detergents would reduce the burden on treatment plants and enable them to function better.

“The indications are that as much as 35% of dam [phosphate] loading could be eliminated through the removal of detergent phosphorus, resulting in an estimated reduction in algal growth of up to 30%.”

Both the European Union and Australia have passed legislation banning phosphates in products from 2013.

Because Unilever is in the EU, I guess they had no choice but to ditch the phosphates.

But this still begs the question. Where are all those soapsuds in the Tiete River coming from?  From the 15 percent market share that Proctor & Gamble detergents have in Brazil -- or had, at the time the memorandum I linked to was written -- and from the other 4 percent of Unilever's competitors in the country?  From non-laundry detergent cleaners that use phosphates? From stockpiles of phosphate-based laundry detergents that Unilever unloaded in Brazil since 2011?

And how can wastewater treatment plants remove laundry detergent phosphates from rivers if the phosphates are being directly added to the rivers by people using them as washing machines?

Which is another way of saying that if Sao Paulo's millions of poor residents can't afford a private well they probably can't afford an electric washing machine, either. I doubt there is a detergent manufacturer selling in Brazil who doesn't know that.