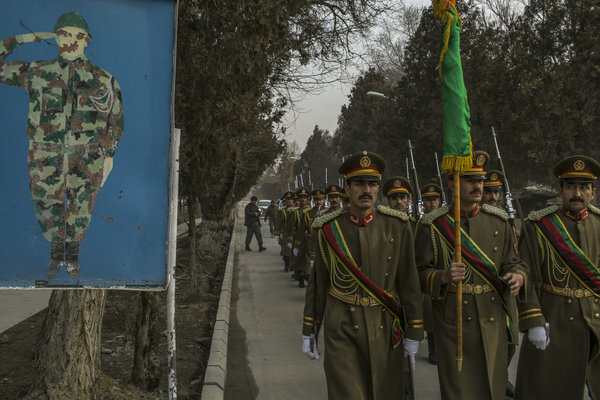 Members of the Afghan Army Honor Guard after a funeral for their fallen comrades at the military hospital headquarters in Kabul in February 2014. A raid by the Taliban killed 21 soldiers in their bunks. Credit: Mauricio Lima for The New York Times

...one army officer, Lieutenant Javed, said in a telephone interview from his outpost that he and his men had faced Taliban fire for seven months without being “out of the battle zone for a single day.”


In the past few months, some 41 of his comrades — more than a third of the soldiers in his area — have been killed, he said, as the Taliban has mined the roads and attacked their guard stations in Musa Qala.

KABUL, Afghanistan — After suffering setbacks and heavy casualties at the hands of the Taliban in 2014, Afghan security forces came into this year with what Afghan and Western officials acknowledge were relatively modest goals: hang on till the end of the fighting season without major collapses.

But with months of heavy fighting still ahead, 2015 is already shaping up to be worse for the Afghan Army and the national police, even as President Obama is set to begin deliberating this year on whether to follow through with a complete withdrawal of the United States military assistance mission here in 2016.

The forces are struggling to maintain a stalemate: an at-least token government presence in the hundreds of district capitals handed over by departing NATO combat troops.

Several Afghan officers described desertion as such a problem that soldiers and police officers in some critical areas had simply been barred from returning home on leave, keeping them on the front lines for months straight.

And after a casualty rate last year that the previous American commander called unsustainable, the numbers this year are even worse: up more than 50 percent compared with the first six months of 2014. About 4,100 Afghan soldiers and police officers have been killed and about 7,800 wounded, according to statistics provided by an official with the American-led coalition here.

A range of interviews with army and police commanders and regional government officials in crucial battleground areas indicated that even though the Afghan forces have nominally met their goal of maintaining a presence in every city and all but a very few district centers, they are often functionally penned in by the Taliban, rarely mounting patrols, much less taking territory back.

At the same time, they say the insurgents have increased their influence in many areas, even near cities, giving them the ability to move freely and mount intensified attacks on the Afghan forces.

“We are in a passive defense mode — we are not chasing the enemy,” said a retired Afghan lieutenant general, Abdul Hadi Khalid. “Units get surrounded, and we don’t send them support, so they are killed.”

He described the consequences of mounting casualties as “really grave,” undermining the confidence of the security forces and the Afghan public. “It will turn into a subversive war that benefits the enemy,” he added.

The fighting this year has put increased pressure on President Ashraf Ghani’s struggling government, even as he has succeeded in opening initial talks with the Taliban in the hope of beginning a formal peace process. For both sides in the war, battlefield results will govern how strong a hand they can bring to the negotiating table.

In several critical areas, particularly in the traditional Taliban heartland in the Afghan south and east, the army and the police say they are struggling to hold on.

In the district of Musa Qala, in Helmand Province, one army officer, Lieutenant Javed, said in a telephone interview from his outpost that he and his men had faced Taliban fire for seven months without being “out of the battle zone for a single day.”

In the past few months, some 41 of his comrades — more than a third of the soldiers in his area — have been killed, he said, as the Taliban has mined the roads and attacked their guard stations in Musa Qala.

Home visits were banned after many soldiers began deserting, and in recent months in Musa Qala and a neighboring district, there have been several cases of soldiers’ shooting themselves in the hope that they would be evacuated, said Lieutenant Javed, who spoke on the condition that he be identified only by his first name.

The urge to desert is often driven by more than just facing danger, he said. Many soldiers cannot access their pay because it can be drawn only at a bank branch in the far-off provincial capital.

“Your family is calling you and telling you they have run out of food, but you cannot send them money,” Lieutenant Javed said, describing the plight of soldiers who are often the sole breadwinners for large families. “This is depressing.”

But by one important measure, Lieutenant Javed and the other soldiers in the district are succeeding: The Taliban flag does not yet fly over Musa Qala.

And that, Afghan and American officials say, is the bottom line. Even if the Taliban are able to gain ground in large stretches of their traditional homeland, like Helmand, it is critical for the Afghan forces to maintain a government presence in the district capitals.

Generals and politicians are expressing confidence that the Afghan military — officially reported at 353,000 strong, including the national and Afghan Local Police forces — will be able to hold, despite heavy losses that a Pentagon report this June anticipated would “increase in the next several months.”

One member of Parliament, Mirdad Khan Nejrabi, said that the casualty rate was “very concerning” but would not lead to any large-scale collapse.

“Our security forces disintegrating — that will not happen,” said Mr. Nejrabi, who heads the Internal Security Committee. “Our forces have no other option but to fight, to defend at whatever cost possible.”

The top American commander in Afghanistan, Gen. John F. Campbell, who is to report to Mr. Obama in the fall with his recommendations on the future of the United States mission here, has praised the Afghan forces for their continued resilience, saying they have continued to be able to inflict heavy casualties on the Taliban.

Some of the heaviest challenges fall to the various Afghan police forces, whose reported 183,000 members are stretched over vast portions of rugged Afghan territory.

In Bati Kot district, a dangerous stretch of eastern Nangarhar Province, one upbeat police sergeant, Muhammad Daud, described how in the past 18 months, his six-man outpost — a fortified hut with a flag flying over it — had suffered only one man killed and another wounded.

That was relatively good fortune, Sergeant Daud said, and it was provided by the checkpoints in both directions down the road that left him insulated from the worst. Not far off, two checkpoints had been overrun by the Taliban, with most of the men inside killed.

He, too, described pressure to desert. He said he often received phone calls from deserters he once knew beseeching him to protect his life and leave his post. “I told them I love my country, and I love serving my country,” Sergeant Daud said.

Concerns about overall force attrition, which takes into account decisions not to re-enlist as well as casualties and desertions, rose sharply after the heavy losses last year, leading Afghan officials to mount a heavier recruiting effort. Though a few military and police recruiters interviewed at posts around Kabul said they ultimately came up short of their increased goals, most described continued success at bringing in new soldiers and police officers.

A spokesman for the Afghan Defense Ministry, Dawlat Waziri, insisted that desertions remained rare and that there had been no effort to ban leaves or to stop rotations away from the front to cut down on the number of people going absent without leave.

But interviews with soldiers and police officers repeatedly countered the government’s claims. One army major in Oruzgan Province, speaking on the condition of anonymity to avoid retribution, said, “Once the soldiers are taken for their breaks, they are unwilling to come back and join their duty — and that’s the main reason the government is not taking them out.”

Constant themes in the security forces’ accounts were worsening morale, how close they were to the Taliban, and how far they were from help and reinforcements.

“Every moment, I’m with my friends in a trench, finger on the trigger,” said Mirza Khan, a police commander who said he had been stationed at a check post in Sangin district, long the scene of some of the heaviest fighting in Helmand Province, for five years. “We are all living by chance, and death is inevitable to us.”

In Musa Qala district, where Lieutenant Javed’s unit is stationed, the lack of reinforcements and medical supplies has heavily drained morale. Somehow, in one of the top opium-producing provinces in the world, the morphine has run out, soldiers and medics in Musa Qala said. Blood transfusions are a rarity, and the blood type that soldiers have listed on their identification cards to assist medics is often incorrect.

Ahmad, a battlefield medic in Musa Qala who would only give his first name, said that he and his colleagues treated arm and leg wounds on the front lines, but that “when the soldiers got wounded on chest, head and abdomen, we cannot treat them or stop bleeding.”

Periodically cut off by the Taliban, the soldiers have not always been able to evacuate casualties out of the district. Their dead often decompose under the hot sun for days — a particular source of anxiety given the Muslim imperative to conduct burials quickly. Sometimes, soldiers have beseeched local men in the town to accept their dead and contact foreign groups like the International Committee of the Red Cross that might be able to get the bodies back to the provincial capital more quickly.

Lieutenant Javed said the prospect of remaining trapped even in death weighed heavily on him.

“I am not afraid of death,” he said. “But I am afraid of this sort of death. Will your body ever arrive safely to your family?”

Afghans Form Militias and Call on Warlords to Battle Taliban -MAY 24, 2015