"Then the fire did something no one here had seen before." Washington state experiences California-type wildfires for the first time

See also: The dire situation in the Olympic Mountains is hurting Washington farmers and businesses, July 1, The Wall Street Journal

Sitting on the tailgate of a pickup truck in front of what had been her home of 18 years, Sharon Cooper marveled Wednesday that all of the precautions she and her husband, Nick, had taken through the years did no good against the Sleepy Hollow fire.
Not the concrete shingles. Not the backyard fire hose with high-pressure water. Not the regular efforts to whack away the brush. 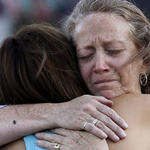 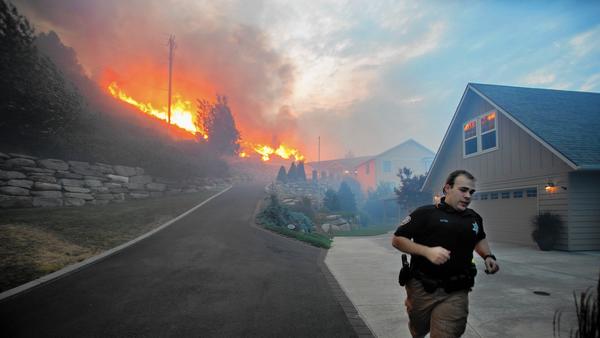 Washington's wildfire season gets off to an early, unprecedented start
By MARIA L. LA GANGA
reporting from Wenatchee, Washington
July 4, 2015 - 3:30 AM
The Los Angeles Times

The Sleepy Hollow fire raced down the crisp Sage Hills, straight toward the Broadview neighborhood in the apple capital of the world. Flames shot high into the night, torching 29 homes and causing hundreds of people to flee. Then the fire did something no one here had seen before.

Embers flew more than a mile Sunday night, into the hardworking heart of this small city. They ignited four industrial buildings, most involved in fruit packing, at the start of the busy summer agriculture season.

The flames sent a terrifying message: Normally soggy Washington — nicknamed the Evergreen State for good reason and home to the wettest town in the Lower 48 — has never been hotter or drier at this point in the year, officials say, and the fire season has never begun so early or so fiercely.

"It's more reminiscent of Southern California and the brush fires fed by the Santa Ana winds," said Peter Goldmark, head of the state Department of Natural Resources. "Now it's up here in the state of Washington, where this kind of behavior is unseen. It's heralding a radical change in the kinds of fires we're going to see."

The Pacific Northwest has long been a magnet for California transplants, but none have been more fearsome than the most recent arrival: the Golden State-style wildfire.

The timing couldn't be worse. The snow pack is gone. Heat records are being broken statewide. More than three-quarters of Washington's rivers and streams are running at below-normal levels, nearly half of them at record lows. Trees and grasses — wildfire's favorite fuel — are as dry throughout the state as they normally would be in August.

Seattle, where conventional wisdom has it that the sun does not appear until July 5, endured its hottest June on record and its driest May and June combined. As the famously overcast region was sweating its way toward Independence Day, the National Weather Service placed the greater Puget Sound area under a heat advisory until Sunday night.

Many officials don't believe that this is a temporary phenomenon. Increasingly, they are convinced that this is the kind of early fire season that the Pacific Northwest can expect as the century unfolds.

"This is a stress test for 2070," said Cliff Mass, a professor of atmospheric sciences at the University of Washington. "We're being tested now with the warmth and lack of snowpack that will be typical at the end of the century. How do we get through it?"

Climate experts say the current conditions in the Pacific Northwest are part of a short-term climate phenomenon, but they warn that temperatures are rising everywhere. In Seattle, for example, that means warmer, wetter winters and warmer, drier summers.

"We won't have the snowpack to get us through the dry season like we are used to," Bond said. "It's not going to completely go away, and it's not going happen in the next few years. But I look at it as a wake-up call and a chance to learn from this short-term climate event about how we adapt to what the future decades will bring us."

The National Interagency Fire Center in Boise ranked all of Washington and Oregon at above-normal threat for wildfires in July, along with northern and coastal California and western Montana and Idaho. By August, the threat should diminish some in Northern California, center officials say. The Pacific Northwest is not so lucky.

Two months ago, Democratic Gov. Jay Inslee declared a statewide drought emergency, a snowpack drought rather than a precipitation drought. At the time, state officials warned that the 2015 fire season could be earlier and fiercer than Washington has ever seen.

Now that it has begun in earnest, "it's worse than I feared," Goldmark said.

No one in Broadview would even think of disagreeing with him. They're the ones who have lived through Wenatchee's record-hot June, who saw the flames racing down the hills toward their well-kept homes on the hottest day ever recorded here — 109 degrees Fahrenheit as measured at the airport.

Sitting on the tailgate of a pickup truck in front of what had been her home of 18 years, Sharon Cooper marveled Wednesday that all of the precautions she and her husband, Nick, had taken through the years did no good against the Sleepy Hollow fire.

Not the concrete shingles. Not the backyard fire hose with high-pressure water. Not the regular efforts to whack away the brush.

"We were having a quiet day inside because it was so hot," Cooper recounted, as her husband wandered through the rubble. "We watched two movies and then we smelled smoke. We got our financial papers prepped. We grabbed that rifle that didn't fit in the gun safe and one handgun.

"I would have grabbed a lot of stuff, but it was so fast," Cooper said, describing a blaze "like a wave of water."

Cooper moved to the Wenatchee Valley 40 years or so ago. She remembers how smoke from last year's Carlton Complex fire — the biggest in Washington state history and just miles away — choked her town. She's never seen weather like this, she says. Her father-in-law's corn is a month ahead of schedule. The Wenatchee River is scarily lower than normal. And the entire state has been declared a drought area.

"This is August kind of stuff," Cooper said, mourning the community's loss, wondering whether she and Nick would rebuild. "Even sometimes the Fourth of July is rainy and yucky here. ... Everything's changing."

By Friday, the Sleepy Hollow fire was 98% contained, good news that couldn't come fast enough for the state's weary firefighters.

Goldmark, the head of the Department of Natural Resources, says he fears the summer ahead. He said he had asked the state Legislature for $4.5 million for fire engines, staff, helicopters and training "so we can be better prepared for this kind of wildfire season, which is much more intense and commonplace."

The Legislature budgeted $1.2 million, he said.

"I'm very short-handed in terms of staff and equipment to meet the current threat," Goldmark said. "I've got a whole state to protect, a big one and a very fire-prone one, with tremendous amounts of fuel, and population that's located close to the fuel. It's not a good mix."

At a briefing Wednesday morning, Chelan County fire Chief Mike Burnett was blunt, beseeching residents to do everything they could to keep fire danger at a minimum as the year's most incendiary holiday [July 4] approached.

"Our resources are strapped," Burnett told reporters. "We don't have what we need to fight any more large fires popping up right now. People are tired, and we're working hard to suppress the fires that we have.

"Please, everyone be careful out there."