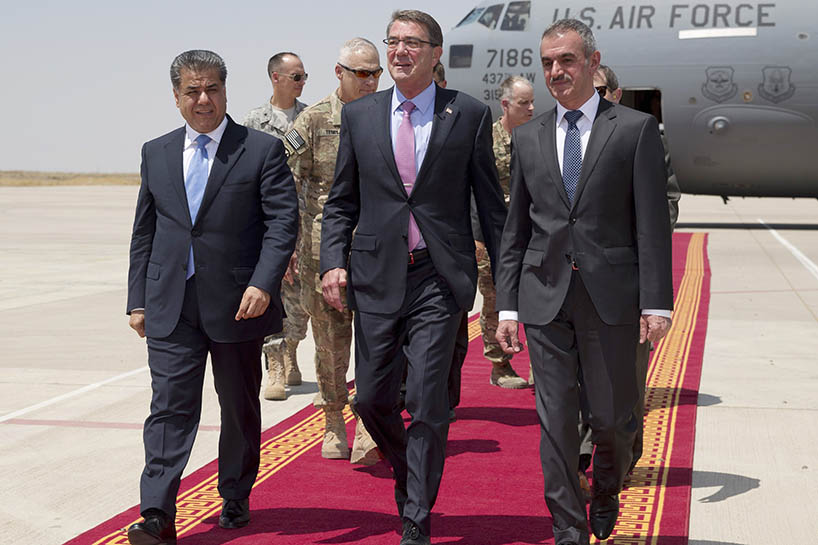 The Wall Street Journal report I featured in my earlier post today about Turkey didn't mention that part, only the roundup of IS. Is this WSJ trying to be nice to a NATO ally? Anyhow, I learned about the Kurds roundup from a Reuters report carried by the Jerusalem Post. Before I turn to that report, other news relating to Kurds:

US Defense Secretary Ash Carter arrived for an unannounced visit to Erbil to meet with Kurdistan Regional Government (KRG) top officials on Friday.

This is Carter’s first visit to the Kurdistan region as the top US defense official.

Carter's unannounced visit to Erbil suggests that while the White House is happy with Turkey's new level of cooperation it has no illusions about Erdogan and wants him to know that -- and is well aware of the key role that Kurds have played in fighting IS.

[Turkey] has also suffered a wave of violence in largely Kurdish southeastern Turkey after a suspected Islamic State suicide bombing killed 32 people, many of them Kurds, in the town of Suruc on the Syrian border this week.

But Erdogan's critics say he is more concerned with keeping Syrian Kurdish fighters in check, afraid that gains they have made against Islamic State in the Syrian civil war will embolden Turkey's own 14 million-strong Kurdish minority.

"Even though Erdogan has so far failed to achieve his goals in Syria - the overthrow of Assad - and Islamic State has become a problem, it is nevertheless a convenient instrument for him," said Halil Karaveli, managing editor of The Turkey Analyst, a policy journal.

"Now he has all the excuses he needs to go after the Kurds and also it makes him look very good in the eyes of the US, which will be happy that Turkey is on board in the coalition."

Three F-16 fighter jets took off from a base in Diyarbakir, southeast Turkey, early on Friday and hit two Islamic State bases and one "assembly point" before returning, the prime minister's office said in a statement.

"We can't say this is the beginning of a military campaign, but certainly the policy will be more involved, active and more engaged," a Turkish government official told Reuters. "But action won't likely be taken unprompted."

Local media reported that helicopters and more than 5,000 officers, including special forces, were deployed in the operation. Anti-terror police raided more than 100 locations across Istanbul alone, broadcasters CNN Turk and NTV reported.

One senior official told Reuters: "This morning's air strike and operation against terrorist groups domestically are steps taken as preventive measures against a possible attack against Turkey from within or from outside ... There has been a move to active defense from passive defense."

Turkey has repeatedly said it would take any "necessary measures" to protect itself from attack by both Islamic State and Kurdish militants.