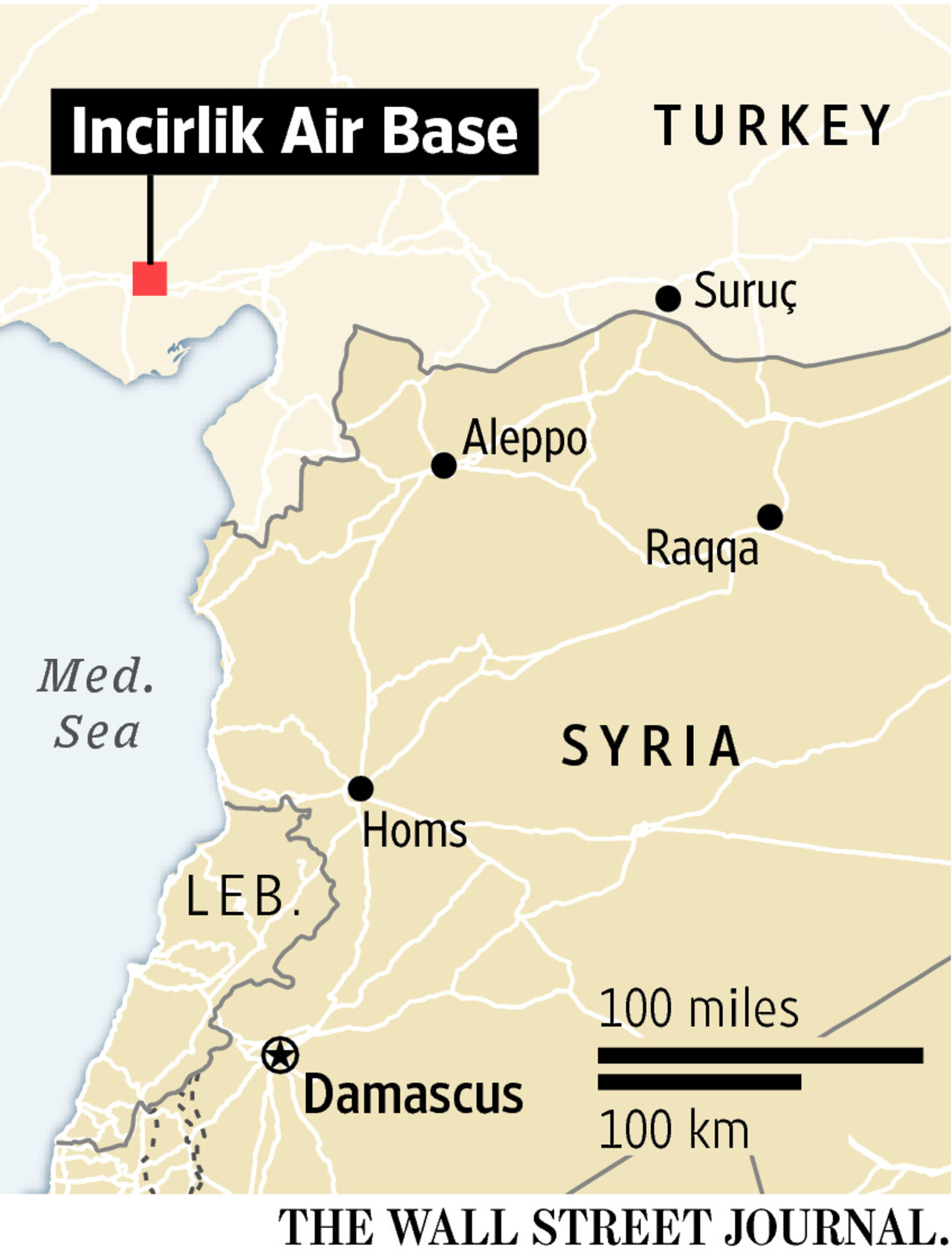 IBT: "Isis in Syria: Turkish jets pound IS targets as Ankara allows US to use Incirlik air base"

Well, I wouldn't call three successful airstrikes a "pounding" and the White House had to twist Erdogan's arm until it nearly came off to get access to Incirlik for U.S. bomber takeoffs.  But there is no question that Turkey's government is now extremely upset about Islamic State actions in Turkey. Looks as if the IS terror bombing in Suruc on July 21 was the final straw.

The key, however, is to plug up the border crossing in Turkey so ISIS can't keep getting supplied. This will mean Turkey getting the cooperation of the "International Community" not to mention the U.S. Department of State.

The prime minister's office said three F-16 fighter jets carried out the strikes at about 04:00 am hitting at least three IS targets.

"Four guided bombs targeted two headquarters and an assembly point," the statement read. The operation was codenamed Yalçın Nane after the military contractor who died recently during fighting with IS militants.

CNNTürk reported that Turkish jets launched the missiles from their country's airspace without entering the neighbouring Syrian territory.

"The state of the Republic of Turkey is decisive in taking any precaution to safeguard its national security," the Turkish government statement added.

Turkish police have also stormed dozens of locations in Istanbul which are suspected to be used by IS militants and Kurdish armed groups. The raids took place in about 26 districts and were led by more than 5,000 Turkish police officers.

The Turkish airstrikes against IS targets, the first since the militant organisation began capturing territories in Syria and Iraq, came shortly after the Ankara administration allowed the US to use its key air base, Incirlik.

The base is likely to give the coalition airstrikes an edge as Raqqa, an IS stronghold in Syria, could become easily reachable.

Though US authorities have not yet formally commented on the specifics of the arrangement with Turkey, both US defence officials and Turkish sources have confirmed it to multiple news outlets.

One Obama administration official described the deal to the New York Times as a "game-changer" in the offensive against IS in Syria and Iraq.

When specifically asked about the Incirlik air base, White House spokesperson Josh Earnest said: "I'm not able to talk about some of those issues because of specific operations security concerns."

Details about the latest plan emerged after President Barack Obama's telephone conversation with his counterpart Recep Tayyip Erdogan during which the two leaders agreed to "deepen" the cooperation against IS.

The Wall Street Journal's July 23 report (8:28 PM EDT) has more information on the U.S.-Turkey agreement about U.S. use of the air base:

[...]
After months of tense negotiations, reluctant Turkish leaders agreed to U.S. requests to use the Incirlik Air Base in southern Turkey to send fighter jets and armed drones to attack fighters based in Syria and Iraq, U.S. defense officials said.

Incirlik is a U.S. base about 60 miles from the Syrian border, giving U.S. jets and unmanned drones vastly improved logistics for daily attacks on the radical group compared with other sites across the region now in use. Military officials said the agreement also opens up other bases in Turkey for potential use in the campaign against Islamic State.

“This is a significant shift,” said a U.S. military official. “It’s a big deal.”

The decision to more closely ally with the U.S. also exposes Turkey to a heightened risk of attack by extremists. Thursday’s clash highlighted the dangers Islamic State, also known by the acronyms ISIS and ISIL, already poses to Turkey, which has long served as the primary lifeline connecting the group’s de facto capital in Syria with the outside world.

“This is a threat at their doorstep,” said a senior U.S. defense official. “In the end, it’s in their self-interest to let us use the base to strike ISIL.”

The broad outlines of the deal were settled in a phone call Wednesday night between President Barack Obama and Turkish President Recep Tayyip Erdogan, hours before Islamic State forces in Syria opened fire on a border outpost, killing one Turkish soldier and dragging the country even deeper into the chaotic regional conflict.

Turkey has long been accused of aiding Islamic State’s rise by allowing its fighters to freely cross its borders — something its leaders have vehemently denied. The country resisted American pressure to do more in the 60-member international coalition battling Islamic State ever since a bombing campaign started last year. Ankara’s hesitation was due partly to differences with Washington over strategy.

Until now, Turkey has only allowed the U.S. to fly unarmed surveillance drones out of Incirlik. But persistent American pressure, combined with increasing threats from Islamic State forces to turn their weapons on Turkey, finally convinced Turkish leaders to take more decisive steps to fight the militants, officials said.

“In the end, we too have become the target for the ISIS,” said a Turkish official at the Syrian border near Kilis — site of Thursday’s cross-border clash. “There’s a growing nervousness along the border.”

Turkey has pushed the U.S. to focus more attention on driving Syrian President Bashar al-Assad from power and establishing a no-fly zone in northern Syria. But the Obama administration has steadfastly opposed the no-fly zone idea, which would require intensive use of American air power to enforce and could draw the U.S. into a direct confrontation with the Assad regime.