How Islamic State is grabbing territory in the Middle East

IS version of M4 Sherman tank 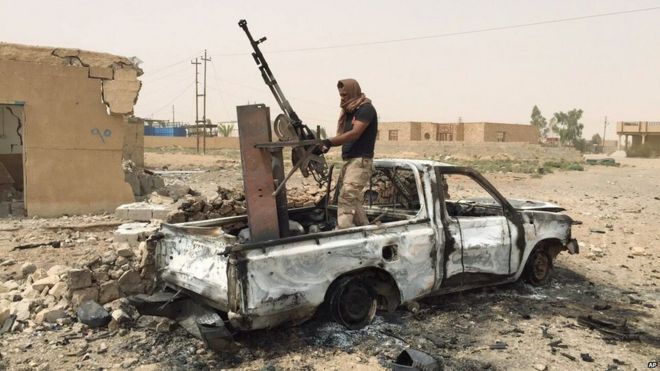 That one was taken out by a U.S. airstrike but the contraption IS rigged out of a simple pickup truck has the same advantage that the Sherman tank did in World War II.  Here's what the M4 looks like:


M4 Sherman – This World War II medium tank was used primarily by the U.S. with thousands more being used by the Allies. The main gun mounted on the M4 Sherman – a 75 mm M3 L/40 - allowed the crew to fire with a fair amount of accuracy even if the tank was moving. The advantages of this tank led to its high demand. As a result, more than 50,000 M4 Sherman tanks were produced during WWII.

The top photo accompanies the BBC July 26 report, Iraqi forces attack Islamic State base in Ramadi. It's unclear whether the Iraqi army was able to rout IS from the university it was using as a base although the Beeb notes "Some reports suggested Iraqi forces had retaken control of the complex."

The complex in Ramadi was virtually destroyed in the assaults, which needs to be read in the context of an IS assault last week that completely blew up a sports stadium, funded by Turkey, near Ramadi that was used as a base for the Iraqi military and allied Shiite militias.

ISIS has completely blown up the Olympic Stadium in Ramadi. Photo: iraqi news

BAGHDAD— Militants from the Islamic State group blew up a sports stadium in the western Anbar province that in recent months had been used as a military base, officials said Monday.

There may have been fighters with the country's Popular Mobilization Unit, the Shiite militias known as Hashd al-Shaabi, inside the 30,000-capacity stadium when it was destroyed Sunday, military and security officials in Anbar said, but they were unable to provide a specific estimate and officials with the Shiite were not aware of casualties.

The Turkey-funded stadium, near the militant-held city of Ramadi, had never been used for sports. In recent months, it was used as a military base for Iraqi security forces and allied militia groups.

The officials spoke anonymously as they are not authorized to brief journalists.

The Iraqi Defense Ministry said last week that security forces were able to "cleanse" the stadium from militants taking refuge inside. It did not elaborate.

The militants seized control of Ramadi in May in what was a major blow to Iraqi security forces on the heels of a victory in Saddam Hussein's hometown of Tikrit.

A US-led coalition has been conducting intense airstrikes in Anbar in an effort to help the Iraqi government regain control of the long-volatile province. Iraqi security forces last week announced the launch of a large-scale operation to retake Anbar province from the militants. However, little progress has been reported so far.

The Islamic State group controls about a third of Iraq and Syria, ruling a self-styled "caliphate" where it enforces its radical interpretation of Sunni Islam. It regularly carries out attacks on Iraqi security forces in an effort to destabilize the Shiite-led government in Baghdad.

Also in Anbar, officials say the Islamic State group ambushed a military unit near the city of Fallujah, killing the group's commander, Ali Ahmed, and four of his men.