"The British don't know who they are, so they can't teach us how to adapt." 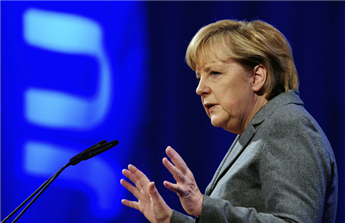 I dislike many of David Frum's views so I thought hard before highlighting his latest opinion piece for CNN on this blog. But he marshals data that's a great help in grasping the complex background to the current furor in Germany about immigration and the implications for other EU countries.

Odd to think in light of today's events that when Mark Steyn's America Alone was published in 2006 his harsh criticism of multiculturalism was met with outrage from many quarters, and that the American blog, Gates of Vienna, which began around 2004 to chronicle the fast-deteriorating immigrant situation in those countries, was considered alarmist.

[...] Speaking in Potsdam on Saturday, [German] Chancellor [Angela] Merkel told a gathering of young Christian Democrats that multiculturalism has failed.

Item: December 20, 2007. Two young men are smoking on a Munich subway train, where smoking is prohibited. A fellow passenger, a 76-year-old pensioner, asks them to stop. What happened next was captured on surveillance cameras. The young men call the old man a "s--- German" and savagely beat and kick him, fracturing his skull. Other passengers on the train failed to intervene. One of the attackers was a Greek immigrant, 17. The other, 20, was born in Germany of Turkish parents.

The Munich train story captured the attention of the country, symbolizing an apparent deterioration of public order driven by multicultural immigration. After the attack, Hesse governor Roland Koch asked: "How much are we prepared to take from a small proportion of violent youths, who frequently have a foreign background?"

This immigrant population is disproportionately connected to almost all of the social problems of modern Germany. Yet the problem that has transfixed the country is, very understandably, the problem of crime. In Berlin, young men of immigrant stock are three times as likely to commit a crime as young men of German background, reports Germany's state broadcaster, Deutsche Welle. In a September interview, Chancellor Merkel endorsed claims that religious young men of Muslim origin were more likely to commit acts of violence than other young Germans.

These crimes seem increasingly the work of criminal gangs of immigrant origin that organize resistance to police authority in what the German media -- with tabloid exaggeration -- increasingly call "No Go areas." Violent assaults upon police officers jumped 60 percent between 2005 and 2009, according to the German newspaper Bild.

Because of very low birth rates among old-stock Germans, the proportion of foreign-born is highest among those younger than 20s. In the poor Berlin neighborhood of Wedding, three out of four students and at least half the parents lived on unemployment benefits and welfare, even before the global economic crisis. In 2005, The New York Times interviewed a teacher in a Wedding high school:

"In Wedding, [Evelyn] Rühle says, immigrant children today speak poorer German and have less contact with German culture than when she started teaching 20 years ago. Many Muslim students ... go to Koran classes outside of school and speak only Turkish or Arabic at home. Meanwhile, the growth of digital television has made a host of Turkish- and Arabic-language channels available, intensifying language problems and nurturing identities that are informed more by the Israeli-Palestinian conflict or the war in Iraq than by the local German environment."

A high-tech economy offers few opportunities for the poorly educated, with the result that immigrants and their children increasingly find themselves dependent on public assistance.

European voters have absorbed these uncomfortable data into a suspicious view of newcomer intentions: According to a recent study by the Friedrich Ebert think tank, 34.3 percent of Germans believe that migrants come to Germany primarily to receive welfare benefits.

Merkel's Potsdam speech did not cite those social problems.

In Germany, the problems created by immigration literally go without saying, and those who do try to talk about them rapidly find themselves ejected from public life. Thilo Sarrazin, a governor of the Bundesbank (and it's worth mentioning, a member of the left-of-center Social Democratic party) was pressured to resign his post in September after publishing a book arguing the failure of Germany's absorption of immigrants.

Yet in the words of Sigmund Freud, the repressed always return.

Even if Germany and the other European Union countries can prevent the immigration population from growing -- and that is a very uncertain if -- they must find ways to deal with integrating the immigrant population already present, both first- and second- generation.

It's safe to say that no country in Europe is succeeding at that all-important job.

Two weeks ago, I visited the British city of Birmingham.

In 2005, the city had been torn by riots that erupted about 50 yards from the lawyer's office in which I met with four community activists. The riots were sparked when a rumor spread through the neighborhood's Afro-Caribbean population that some Asian youths had gang-raped a black girl. That rumor proved false, but only after blacks and Asians had fought two days of street battles that left two people dead.

I asked these local leaders how things had changed since 2005. The answer: not very much at all.

The authorities had responded to the riots by infusing more money into the community and by intensifying police patrols.

But the mutual suspicions between groups had not been allayed. Problems of integration remained. One of the four activists I met was obviously uncomfortable speaking English, even though born and raised in the United Kingdom.

One said to me very poignantly: "The British don't know who they are, so they can't teach us how to adapt."

On the other hand, it's not so clear how much the newcomers want to adapt. The man who spoke poor English had spent his entire life inside an Islamic school system, memorizing the Quran in Arabic. Hard to see how that form of knowledge would equip anyone for life in a modern technological society.

Quietly, some Europeans are wondering whether Europe -- by stumbling into an American-style immigration policy -- has willy-nilly forced itself to follow other American policies as well:

-- A less generous welfare state that compels migrants to work rather than collect benefits paid for by the native-born.

-- A stronger assertion of national identity -- and a more emphatic demand that newcomers adapt to the existing society.

These days, many American conservatives are warning that the United States is going the way of Europe. But maybe the real story is the reverse: Is it Europe that will soon be imitating the United States?

The opinions expressed in this commentary are solely those of David Frum.

This problem doesn't match with the Indian American immigrants in the US or the non-Muslim, non-Sikh immigrants of Indian origin in Europe.

Migration and the Changing Face of Education
Globalisation means that we now all live, work or communicate with people who are different. In this global village, religious faith plays a central role in the way that people understand or from their culture and identity. Human being is a product of his culture, language and faith. There is a positive co-relation between language and culture. Parents have the right to raise their children in faith based schools. Those who object to this right display their contempt for parental rights and sadly intolerance for the religious convictions of others. It is not only Muslims but other communities have been trying to set up their own schools for their children. I set up the first Muslim school in 1981 and now there are 166 Muslim schools and only 11 schools are state funded. There are four Sikh state funded schools. Hindu state funded school was set up in Harrow last year and next year a Hindu state funded school would emerge in Leicester. Even Black community is thinking of setting up its own schools for black children with black teachers.

A study by Bristol University reveals that a high level of racial segregation in Oldham schools and tension between communities resulted in recent riots in 2001. A report by the Institute for Community Cohesion found that native parents were deserting some schools after finding their children outnumbered by pupils from ethnic minorities. The native parents do not want their children to be educated along with migrant children. Schools in parts of England are becoming increasingly segregated. Many of the schools and colleges are segregated and this was generally worsening over recent years. This is RACISM. The solution is that those schools where Muslim children are in majority may be opted out as Muslim Academies. State schools with non-Muslim monolingual teachers are not in a position to satisfy the social, emotional needs and demands of the bilingual Muslim children. Majority of them leave schools with low grades. They find themselves cut off from their cultural, linguistic and spiritual identities. Muslim children in state schools feel isolated and confused about who they are. This can cause dissatisfaction and lead them into criminality.

Immigration is an unstoppable face of modern society, and immigrants will need help integrating, but the host society needs to show zero tolerance to non-EU and EU citizens who clearly don't like being here. The second generation of Muslim migrants is facing a huge challenge because they did not think even for a second before that someone would say, 'You are not welcome. Native Brits feel that their culture and language is superior and every Tom and Harry must learn English and forget their own languages, cultures, literatures and poetry. It is the native Brits who need to learn and respect those who are different. Immigrants are also human beings with social, emotional and spiritual needs and demands. They are not just economics for the economic prosperity.

British children in Spain come with this mentality, wanting to keep themselves to themselves and feel no obligation to integrate into Spanish way of life. The Brits are the most problematic minority group in Spanish schools. They are worst at learning the host language and integrating into school life than any other nationality in Spain's state schools. They have negative attitudes towards integration. They carry a strong sense of English linguistic superiority. They were embarrassed to speak Spanish because the other students laughed at them. Brit children had very little or no concept of Spanish culture or social life. They watched UK TVs and English language radios. Their parents do not speak Spanish nor have Spanish friends. In English ghettos, Spaniards fear to tread. They have no interest in being part of Spanish society.
Iftikhar Ahmad
http://www.londonschoolofislamics.org.uk