State of the American Union: snapshots

... The founders of this country designed government for debate, not for unity. One does not need separate branches of government with independent checks and balances if one expects unity. In fact, one doesn’t need free elections if one expects unity. They were wise enough to know that a free people would never entirely agree on anything except the desire to live in freedom. Calling for a free people to “unite” on issues of policy means one thing: I want everyone to agree with me. ...

True, all true. But Dan suspects that Morrissey, who is politically on the Right, has substituted the search for comity for the search for unity. I don't follow Morrissey's writings at Hot Air so I can't speak to Dan's observation. But Dan's point is that America's situation is so dire that this no time for the Right to attempt comity with the Left or the Middle:

... The philosophical disagreements existent today aren't happening within any previously unified traditionally American framework. ... We've already reached a point in America today where our genuine liberties and our rights to them are being constrained at every turn, either by the judiciary, or both the executive and legislative branches of government - much of it empowered by the same protesters at this One Nation event in very general terms. It isn't simply the fringe groups, as Ed would assert. ...

Through accommodation and compromise, a once free and ruggedly individualistic America is already on the brink of becoming a European-like quasi-, if not, socialist state. That is nothing close to the America our Founders envisioned. So, like it, or not, it is voices on the Right who recognize and are willing to engage the fight today that most need to be heard. This can't we all get along nonsense has done nothing but undermine conservatism over the last twenty, or more years. And more of the same is only going to make things worse. ...

Our disagreements are not minor today. They will chart the course of America and American lives for generations to come. The Left has reached critical mass with its co-optation of our government, and all this minor disagreement stuff on the Right has already enabled it to go on for far too long. ...

I'll take this opportunity to mention Dan's recent appearance on the Sean Hannity Show (video). I'm not a Hannity fan but it's always a cause for celebration when a serious blogger makes it onto a national television show on the strength of blogging, and that's what Dan has done. 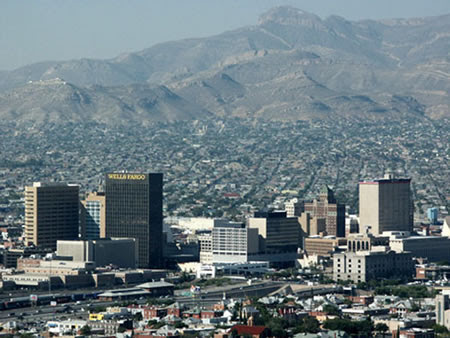 This from an American reader who lives in the city of El Paso, a stone's throw across the border from the Mexican city of Ciudad Juarez, which has been called the murder capital of the world because of the horrific violence unleashed there in the last few years by drug cartels and the gangs that serve them:

El Paso may have a large population, but it is essentially nothing more than a large village. Its growth has come as a result of the drug trade. The largest employer (excluding the military bases) is the EP Independent School District. They are large because we educate Mexico's illegal population. There is very little business here. ...

English is a second language here. Its no different in Arizona along the border. Same thing.

NAFTA did wonders for San Antonio, but left this place in the dust.

The large Democratic base here has become accustomed to entitlement and Austin [the Texas state capital; Republican governor] can't stand El Paso. Very little is ever accomplished due to this disdain.

John Wilson "Texas Jack" Vermillion aka "Shoot Your Eye Out" Vermillion
Soldier, lawman, outlaw, Methodist preacher - 1842-1911
When asked why he was called Texas Jack he replied, "Because I'm from Virginia" 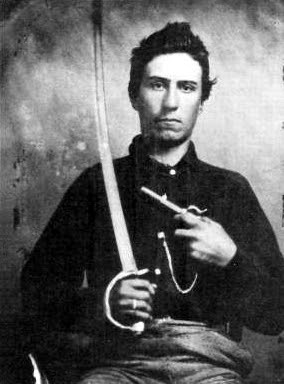 Americans, who are you?

An American blogger I'd never heard of before, Mike at Shoot Your Eye Out, responded to my highly critical remarks about Americans in the post about David Michael Hartley's murder. He wrote that he'd expressed similiar sentiments in an essay he'd written years ago then updated in response to the car burnings in the 2005 Paris riots. He updated the essay again after I expressed interest in reading it. Here are quotes from the essay:

... After all the struggle and blood and pain that it took to face down the terrible guilt and shame that we were people who owned people it comes again to haunt our spirit and challenge us to be what we say we are. For all the good and evil that crashed together to make this city on the hill, it seems always necessary to fail and to be able to stand up again. For the city is made up of humans with feet of clay and terrible past mistakes to be made right. To do less is to not be what we can be.

The visitor in the night now is millions of poor desperate people from a corrupt and desperate land who brave hot sun and pitiless dirt to cross into a place where they can survive as servants and slaves to a ruling class that does not even know that is what they have become. Millions come here now to serve the people with sleepless nights of fear that the dream has to be realized by sweat and tears and failure, to hold together a tissue of what humanity might be, against what is only humanly possible. That statue in the harbor is not always what it seems for the boats that fail to sail under it’s light and book.

They mow lawns that our children once did to learn the value of work. They clean the kitchens and the tables, unseen and invisible like the servants of old England, while we talk and drink pretending not to see them. They pick and pack the food we eat. They unload the trucks and stock the shelves in the great stores who scrape the pennies from their pockets. They haunt the parking lots of the home centers waiting to serve. They take the construction jobs and summer jobs that our high school graduates and children once did. The people who use them drive the wages down so our own cannot afford anymore to take those jobs. They bring no skills or education except those that require labor and work and desperation.

We feel sorry for them and ignore the reality so we can feel good about ourselves and keep the imagined dream alive. But it is not now anymore the old world of labor and open spaces. We stare at the ceiling at night, awake, because others are now taking our best jobs in faraway lands. The best and brightest there are now staying home to build their own communities and countries. To take more and be more, and create more and more over there.

Is it all that comfortable to keep household servants when the household crumbles? Is slavery what we expect the new immigrants to aspire to here, now? Is our failure so apparent that we must hide it behind manicured lawns and quick lunches in a brave new world? Do we now own slaves because we still can and not have to face it? Sometimes being nice and feeling sorry for somebody is the wrong answer. Not everybody can or should come to the city on the hill or there will never be other cities built and the city will cease to be on the hill.

We have an immigration sickness that could become a cancer. Ignoring it and wishing it away with soothing and false words about nineteenth century assimilation could lead to our own cars burning in the night. When the wealth is never enough.

Tiffany Hartley at her husband's memorial service on Tuesday 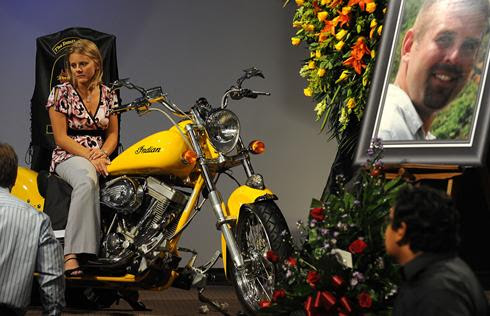