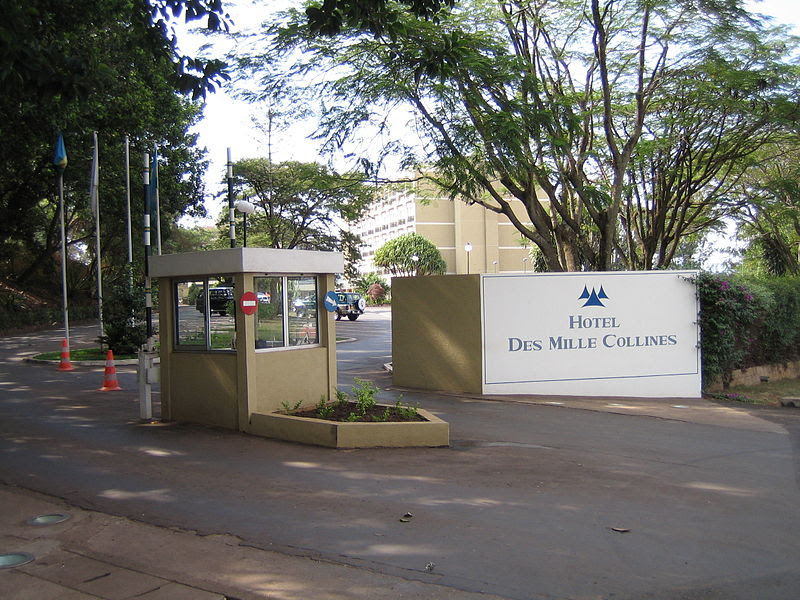 I got Post Traumatic Stress Disorder from my experiences in Sri Lanka during the early period of the genocide there. In those days not as much was known about PTSD as today so it was years after that before I was diagnosed and got treatment.

I'm okay; I'm as recovered as one can ever be from the disorder, but there are still certain topics I avoid and one of them is the Rwandan genocide. So I didn't see Hotel Rwanda when it was in movie theaters and I avoided learning anything about it. Years later, a friend who gave movie parties showed the video of the movie. Early in the film I thought, 'I can't deal with this.' I went outside, smoked a cigarette, then told myself, 'Go back in there.'

I'm glad I did. I would never watch the movie again, but the story of one person's quiet courage in reply to unspeakable evil is like a friend's reassuring grip on one's arm during a terrible storm.

Someday, when the war is over, I plan to pay closer attention to doings at the United Nations. I've done my share of UN-bashing on this blog but I know there are some very good people working for various UN organizations. Generally they labor at the mid-levels and lower; above them is corruption and cowardice, and so the efforts of the good ones are in the manner of bailing water. Yet it is the unsung efforts of the water bailers which give the human race something to hold its head up about.

So I was interested to learn from today's (U.K.) Independent that some people at the United Nations had outwitted their superiors:

[...] The move against another high-profile critic of the Kagame government comes at a time of rising concern for human rights and democracy in Rwanda. Until recently Mr Kagame was credited with overseeing a miracle in the mountainous nation as it quickly recovered from 100 days of ethnic slaughter that killed nearly one million people. A country made infamous by one of the worst atrocities of the late 20th century has steadily become better known for gourmet coffee, gorilla tourism and its ambitions to be a central African hub for hi-tech industries.

Mr Kagame, who led the Tutsi rebel forces that overthrew the Hutu government in 1994 and effectively ended the genocide, was widely seen as a disciplined and effective modernising force. That lustre has been lost in the past 12 months amid a crackdown against all opposition before elections in August. Newspapers were closed, credible opposition groups were prevented from registering to take part and dissidents, including a journalist and an opposition leader, killed.

In the absence of serious opposition the President won by a landslide. The Rwandan government denied involvement in any of the attacks or killings and vowed to fully investigate any criminal actions. Since the vote there has been no let-up in the pressure on Mr Kagame's critics and the best known of the opposition leaders, Victoire Ingabire, was re-arrested earlier this week and is facing a possible life sentence over an alleged terrorist plot.

Mr Kagame has also fallen out with the United Nations recently after it issued a report which accused his government of conducting mass killings of ethnic Hutus across the border in Congo. A draft of the UN report was leaked prior to publication amid fears that Kigali would succeed in having references to the attacks as "genocidal" removed from the final document.

That's one small triumph for the water bailers. To back up to the beginning of the Independent report, filed by their Africa correspondent, Daniel Howden:

The man made famous by the film Hotel Rwanda and credited with saving more than 1,200 Tutsis during the 1994 genocide said yesterday that he fears for his life after the country's President made him "an enemy of the state".

Paul Rusesabagina, a former hotel manager currently living in Brussels where he says his home has been repeatedly ransacked, will be charged in Rwanda with links to a terrorist group.
[...]
Mr Rusesabagina has been one of the highest-profile critics of the government of Paul Kagame, who was re-elected earlier this year after a campaign marred by the killing of dissidents and a crackdown on opposition groups.

His Hotel Rwanda-Rusesabagina Foundation has called for a Truth and Reconciliation process in the country and warned that government oppression could lead to a fresh genocide in the Great Lakes region.

"Rwanda has become a big open prison where Kagame is the chief warden," said Mr Rusesabagina. "There is no free man in that country."

The anticipated charges are based on evidence provided by captured rebel commanders, Rwandan prosecutor Martin Ngoga said on Tuesday. "Those who want to continue considering him as a hero can go on. We consider him a serious criminal suspect who has been financing FDLR and we are challenging whoever speaks on his behalf to tell us whether he never sent money to these FDLR commanders we have in custody."

After the release of Hotel Rwanda Mr Rusesabagina was celebrated as a hero and humanitarian around the world. This stoked resentment in government circles in Kigali where the president has referred to him as "the Hollywood-made hero".

Mr Rusesabagina said accusations that he has been funding rebel groups were "fabrications" and that he would be happy to face trial in Belgium if necessary, where he is now a citizen. "I'm not surprised that they would go as far as making things up, even documents, they are very cunning," he said.
[...]