Karzai: About that money from Iran. I can explain. 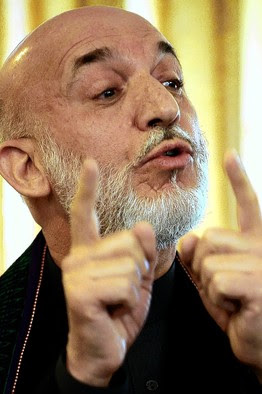 You know, I feel so sorry for people who complain about being bored, or who have to make do with the crummy line-up of network and cable TV shows for their evening entertainment. I have the war on terror to keep me amused.

You can't make this stuff up. The best scriptwriters are left in the dust.

UPDATE 1:30 AM ET
From the schedule for John Batchelor Show October 25, John's notes on his interview with Wahid Monawar Read the WSJ report I linked to above for background on Karzai's remark that cash payments from Iran are transparent:

Monday 1050P (750P Pacific Time): Wahid Monawar, former Afghan ambassador to UN IAEA in Vienna; now with Zurich Partners, in re: Iran: This is not a one-way street. What [is Iran] getting in return?

"For Karzai to call this process [of taking cash from Iran] 'transparent' is bilge water. In September 2008, I campaigned to have Afghanistan serve on the board of governors of the IAEA; Iran heavily pressured us to withdraw our nomination. We had the support of OIC, Australia, European countries. And Karzai insisted I withdraw the nomination, which I declined to do. Iranian ambassador objected; the chair of the meeting, the Italian ambassador, was amazed at his position; it was the end of Ramadan, so Iran didn't pursue this. It became a big issue at the general conference; at the last minute, Syria withdrew so we served for two years on the board of governors. After my five months of campaigning for this prestigious position, I was relieved of my duties because I didn't obey Karzai, who was obeying Teheran."

The podcasts for Monday's show are not yet posted to the WABC Radio website. Check at the site in about an hour; the podcasts should be up by then.
UPDATE 4:50 AM ET
From AFP wire service via Pakistan's Dawn newspaper, October 26:

TEHRAN: Iran acknowledged on Tuesday that it had given “assistance” to Afghanistan in reconstructing the war-wracked country, after President Hamid Karzai admitted receiving bags of cash from Tehran.

“The Islamic Republic of Iran, as a neighbouring government is deeply concerned about Afghanistan’s stability, and has given much assistance for the reconstruction of Afghanistan,” foreign ministry spokesman Ramin Mehmanparast said when asked to comment on Karzai’s announcement that Tehran had given bags of cash to one of his aides.

“The Islamic Republic of Iran has done its part in helping Afghanistan rebuild and develop its economy and will do so in the future,” Mehmanparast said, without elaborating on the form of the assistance.

The White House on Monday voiced concern about Iran’s “negative influence” on Afghanistan in the light of Karzai’s revelation.

Karzai insisted at a news conference in Kabul on Monday that the payments to his chief of staff — sometimes as much as 700,000 euros (980,000 dollars) at a time — were transparent payments for his presidential office.

But White House deputy spokesman Bill Burton said: “I think the American people and the global community have…every reason to be concerned about Iran trying to have a negative influence on Afghanistan.”

He said Iran had a responsibility to exert “a positive influence on the formation of a government there, and to ensure that Afghanistan is not a country where terrorists can find safe harbour, or where attacks can be planned on their soil”.

The New York Times reported on Saturday that Karzai’s chief of staff, Umar Daudzai, received regular cash payments from Iran, which is reportedly trying to expand its influence in the presidential palace in Kabul.

Karzai angrily denied that the payments were secret.

Cash payments “are done by various friendly countries to help the president’s office… this is transparent,” Karzai said Monday.

“This is nothing hidden. We are grateful for Iranian help in this regard. The United States is doing the same thing. They’re providing cash to some of our offices.”

Asked if the money came in bags, as reported, he said: “It does give bags of money yes, yes it does…it’s all the same, let’s not make this an issue.”

He said Iran — which has had no diplomatic relations with the United States for three decades — has assisted his government with up to 700,000 euros once or twice a year in the form of official aid.

“He (Daudzai) is receiving the money on my instructions,” he added.

In a statement issued shortly before Karzai spoke, the Iranian embassy in Kabul dismissed the New York Times report as “false, ridiculous and insulting”.

”Such baseless speculations are being spread by some Western media outlets in order to confuse public opinion and damage the strong ties between the governments and nations of the Islamic republics of Afghanistan and Iran,” it said. — AFP