Has this problem been fixed yet? Or does ISAF plan to set up a Welcome Wagon and food court for Taliban on the Afghan side of Torkham Gate? 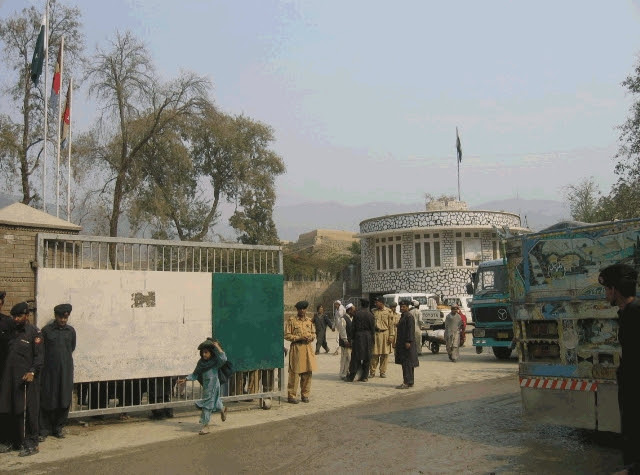 TORKHAM, Afghanistan — For more than a week since a confused U.S. helicopter strike killed two Pakistan paramilitary soldiers, Pakistan has blocked scores of Western supply convoys on the vital route that supports the U.S-led military campaign in Afghanistan.

Yet every day, say taxi drivers, security officials and border shop owners, Taliban insurgents cross from Pakistan into Afghanistan with nary a second glance from border officials.

"Every day, 40,000 to 70,000 people pass through the border, we can't handle it," said Gen. Mohammed Zaman Mamozai, the commander of the Afghan Border Police stationed at Torkham gate. "For us it's very difficult, and it's not possible to ask every single person where they are going and if they have a passport."

"If they want to come to Afghanistan, none out of a hundred will be arrested," said Sediqullah, a 36-year-old Afghan taxi driver, as he waited for Torkham-bound passengers outside Kabul.

Among the thousands of men he's picked up at the border, Sediqullah, who like many Afghans has one name, suspects that he's unwittingly ferried plenty of inconspicuous Taliban insurgents heading to fight U.S.-led military forces across Afghanistan.

Pakistan's willingness to allow sanctuary for Afghan insurgents long has strained ties with the U.S., and its closing of one of NATO's critical supply routes to Afghanistan added to tensions. However, Afghanistan also shares the blame for failing to guard its own front door.

For nearly a decade, the U.S. has spent hundreds of millions of dollars trying to cut off the remote, high-altitude mountain trails Taliban forces use to smuggle weapons and fighters into Afghanistan.

Now, the U.S. military is turning its attention to the border crossing.

"More and more we've realized that they are not coming through the passes, they're just coming through the . . . gate," said one U.S. government official in Afghanistan who spoke on the condition of anonymity so he could candidly discuss the unfolding plan to focus on the border crossing.

The U.S.-led coalition is setting up a special task force in eastern Afghanistan to deal with the insurgents who are coming into the country through the front door.

Torkham is one of America's busiest military lifelines into Afghanistan. About half of the U.S.-led military coalition's supplies come through Torkham, which is on the western edge of the fabled Khyber Pass, and the southern crossing at Spin Boldak, Afghanistan.

Not only have convoys headed for Torkham been idled, but Taliban officials in Pakistan also have claimed credit for a series of attacks on fuel trucks along the country's second supply route bound for NATO bases in Afghanistan.

Less dramatic, but every bit as troubling, is the suspected flow of insurgents using the porous crossing to dispatch new fighters, coordinate attacks and return to relative safety on the Pakistan side of the border.

No one can say how many foreign fighters pass through Torkham. Gen. Mamozai of the border police said he suspects that more insurgents use clandestine routes, but Torkham now has the attention of U.S. military officials.

"This area is our first priority," said a U.S. military official in eastern Afghanistan who also agreed to discuss the evolving program only if he could speak without being identified.

The Taliban presence is clearly evident at Torkham. [...]

Mamozai said his forces don't have the resources, intelligence network, surveillance equipment or Western support necessary to secure the border.

In the past nine months, the general said, his men had made only a few dozen arrests and confiscated a few hundred weapons at the border.

Getting a handle on the problem, he said, would require the Obama administration to put increased pressure on Pakistan to target insurgent havens along the border.

"Pakistan is not helping," he said. "The problem is that the international community is not going to that side of the border."

Border corruption and abuse are widespread.

Within minutes of arriving at the Torkham crossing gate earlier this week, two Western reporters watched a Pakistani border guard shake down a young traveler for a few dollars before letting him into the country.

Nearby, a second Pakistani border guard roughly pulled a second young man into a tiny border police shack after the traveler refused to comply with demands for cash.

On the other side of the road, Afghan border police stood by as scores of people walked into Afghanistan without being checked at the last gate. [...]

McNorman -- No mention; I'm just getting warmed up.