Escorted by Texas Parks and Wildlife rangers and her family members, Tiffany Hartley leans over a raft to lay a wreath on Falcon Lake, near the place where her husband, David, was shot on September 30. His body has not been found. 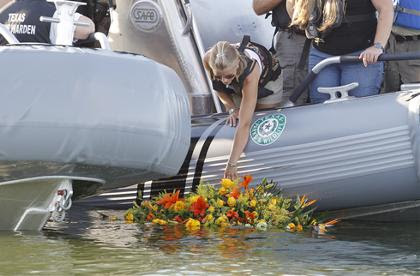 The Department of Homeland Security has offered their condolences to the Hartley family, and Homeland Secretary Janet Napolitano made a sharp retort to speculations about Tiffany's account of the shooting: "Speculation is unwarranted."

The Obama administration has realized that the murder of David Michael Hartley is literally and figuratively blood in the water.

The shooting was so senseless, the Hartleys were so full of love of life and strong in their Christian faith, that it has become a macabre symbol for all the innocent victims of border drug violence, for all the years the American and Mexican governments and citizens in both countries looked the other way about the growing threat from the drug cartels.

The Hartleys were residents of McAllen, Texas. Furious about the shooting incident and the seeming slowness of the Mexican authorities to search for Hartley's body Texas Governor Rick Perry, who'd spent years demanding Washington take greater action about border violence, made a direct appeal on Wednesday to Napolitano and Mexico's President Felipe Calderón to take charge of the search. The response was immediate:

Napolitano said U.S. authorities were working with Mexican officials in Tamaulipas, who were dredging the reservoir on Wednesday. Mexico's Foreign Relations Ministry issued a statement Wednesday afternoon in response to Perry's call.

The statement said Mexican authorities "from the first moment" have been in contact with their U.S. counterparts to coordinate the search for Hartley's body, and noted that Mexican officials have "stepped up their actions with … specialized personnel, boats and helicopters."

There have been wildly differing accounts of when Mexican authorities began the search and the extent of their search. On Wednesday came the announcement that members of the Mexican army had joined Mexican federal police and the Tamaulipas sheriff's office in an exhaustive search during daylight hours of the Mexican side of Falcon Lake. Texas State Rep. Aaron Peña (D-Edinburg) disputed the account:

U.S. officials said they searched their side of the lake. Their Mexican counterparts said they did the same. But Peña, along with others on the reservoir, said he did not see much activity on the Mexican side of Falcon Reservoir by authorities — or anyone at all.

“I did not see any Mexican officials out there,” said Peña, who chairs the state House subcommittee on Emergency Preparedness. “I expected to see them, but I didn’t.”

During all this time a correspondent for the Christian Science Monitor was digging into the background of criminal activity on Falcon Lake and today filed a report that is an embarrassment to both the Mexican and U.S. governments:

Why Mexican 'pirates' are targeting US tourists on Falcon Lake

New drug trafficking routes into the United States may now intersect more with tourist areas such as Falcon Lake.

The attack that allegedly killed the missing American tourist David Hartley on Sept. 30 while he was jet-skiing with his wife was not the first such incident on the 60-mile-long body of water straddling the United States and Mexico.

According to the Texas Department of Public Safety, gunmen armed with AK-47s and AR-15 rifles have attacked US tourists on Lake Falcon in a string of robberies in recent months. Using Argos-type fishing boats, some attackers are dressed as Mexican police, while others have used crude duct-taped signs to disguise their boats as Texas Parks and Wildlife vessels, according to victims' reports.

Since April 30, five incidents of armed robberies or attempted theft have been reported on Falcon Lake: one in April, two in May, and one in August. The fifth ambush allegedly ended in gunfire last week with the possible death of Mr. Hartley.

“This is a new situation where [drug-trafficking] groups feel they own public spaces,” says Humberto Palomares, a security expert at the Tamaulipas campus of the Colegio de Frontera Norte (COLEF).

Targeting US tourists on an international reservoir is just another sign that the cartels feel more in control of swaths of Mexican territory and don’t have to hide in wait for moments to strike, Mr. Palomares says.

Lurking in the night

So dangerous is Lake Falcon, in fact, that Mexican law enforcement refuses to patrol it at night.

Mexican authorities have been searching Falcon Lake since Thursday for the body of Mr. Hartley. Their search is hampered in part by the danger of the lake, says Juan Antonio Jara, a Tamaulipas state prosecutor in the Miguel Aleman municipality office.

Once it starts getting dark, he says, police and investigators must return to shore because "it's a high risk area due to [lack of] security."

Some report that the bandits attacking tourists and fishermen on Lake Falcon have been brandishing “Z” tattoos, for the ruthless Zetas drug-trafficking group.

But questions have emerged over why a well-funded crime syndicate would bother harassing US fishermen for a few hundred dollars, and whether there is only one gang involved.

While the Zetas are the most powerful drug cartel in Tamaulipas, the state bordering Falcon Lake, small organizations associated with the Zetas may also be engaging in acts of piracy, says Jose Maria Ramos, a border relations expert at the Tijuana campus of COLEF.

Lack of extensive law enforcement on both sides of the border only helps breed insecurity, Mr. Ramos adds.

Security forces say cartels such as the Zetas are being forced to diversify into theft and piracy as the drug war chokes off trafficking profits, although not all experts buy that explanation. Instead, says Ramos, cartels are constantly establishing new drug trafficking routes into the United States that at times follow immigrant and even tourist paths.

These inevitably lead to conflict.

Before the Hartley case there seemed to have been little or no action taken by Mexican authorities on the robberies, and even less coordination with local US law enforcement. There had never before been reports of robberies on Falcon Lake or security concerns voiced by US law enforcement to local Mexican officials, according to the Tamaulipas prosecutor's office.

The Mexico City headquarters of the Federal Attorney General’s Office said it has not been involved in any Falcon Lake cases as robbery and murder are state crimes. [...]

Yes, but only part of Falcon Lake is in Mexican territory; given the proximity of the lake to the USA, Mexico's federal authorities should have looked into incidents on the lake before a tragedy became headlines. The same charge, however, can be leveled at the U.S. federal authorities.

This poor young woman. I can't imagine what she is going through right now.