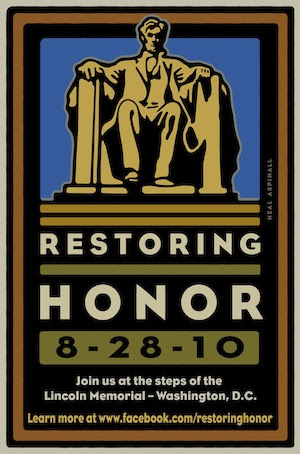 From Jon Stewart's closing remarks at the 10-30 rally on the Washington National Mall:

“I can’t control what people think this was. I can only tell you my intentions. This was not a rally to ridicule people of faith or people of activism, or to look down our noses at the heartland or passionate argument, or to suggest that times are not difficult and that we have nothing to fear. They are, and we do. But we live now in hard times, not end times.”

If the rally wasn't to ridicule people of faith, why did it begin with a fake benediction from comedian Don Novello playing a fake cleric, Father Guido Sarducci? Or did Stewart and Colbert only mean to make fun of the priest who gave the invocation at Beck's rally?

Stephen Colbert and Jon Stewart very clearly signaled in their mocking advertisement for the 10-30 rally that they wanted to draw the kind of Americans who hate Tea-Partiers, Glenn Beck, and everything Beck's Restoring Honor rally stood for. So for Stewart to say in the end that he couldn't control what people thought of his rally is sophistry. And to say it wasn't his intention to ridicule the kind of Americans who attended Glenn Beck's rally -- did the scriptwriters for his TV show get the memo?

I think Stewart was being two-faced. He wanted to draw anti-Tea Partiers and Beck-haters to the rally then as a sop claim it was all for a good cause: he just wanted to prod Americans with dissenting political views into being more cooperative.

I'd be surprised if Colbert agrees with Stewart's 'Can't we all just get along?' wrap-up meme. He's gone much further than Stewart in conveying his hatred for mainstream Americans. Last month he gave mock testimony before a U.S. congressional committee. That was just so he, and the Democrat who invited him to testify, could portray as extremists Americans who are against illegal immigration. That waste of taxpayer money was an embarrassment to some Democrats but termed 'irony' by Colbert's apologists.

Irony is a time-honored tactic in social criticism but Colbert and Stewart don't use irony in that way; they use it as a verbal bludgeon on Americans who don't share their political views. And even while making a show of conciliation Stewart couldn't resist using the bludgeon by adding that while America was facing hard times this didn't mean "end times." That's a clear reference to the American Christians who believe the Second Coming is imminent and claim to know how the end of the world will play out.

In other words, Stewart signified that American political activists who don't share the views of political 'progressives' are extremists. That same tack has been relentlessly deployed by the Democratic Party political machine and the Obama administration in the attempt to discredit the Tea Partiers. The U.S. Department of State even went so far as to use an American critic of the Tea Partiers to interpret the Tea Party movement to the foreign press. The critic, a reporter for the famously anti-Tea Party New York Times, hammered away at the theme that the Tea Partiers represent an extremist political movement.

If Stewart and Colbert and their friends in Washington want to mock extremism they can try out their brand of irony on these statements from a column by Neil Reynolds for Canada's Globe and Mail:

Writing in the September issue of Finance and Development, a journal of the International Monetary Fund, Prof. Kotlikoff says the IMF itself has quietly confirmed that the U.S. is in terrible fiscal trouble – far worse than the Washington-based lender of last resort has previously acknowledged.

“The U.S. fiscal gap is huge,” the IMF asserted in a June report. “Closing the fiscal gap requires a permanent annual fiscal adjustment equal to about 14 per cent of U.S. GDP.”

This sum is equal to all current U.S. federal taxes combined. The consequences of the IMF’s fiscal fix, a doubling of federal taxes in perpetuity, would be appalling – and possibly worse than appalling.[...]

Now those are extreme statements. Stewart et al. had better hope the IMF and Kotlikoff are wrong. If they're right "hard times" would be nowhere near a description of what Americans will endure.

The problem is that hope isn't a strategy. The Tea Partiers do have a strategy for averting the worst-case scenario, which, as Reynolds noted, is that, "In the coming years the U.S. will almost certainly be compelled to deconstruct its welfare state." The same message is already reverberating in European capitals that were hit hard by the financial crisis.

Political 'progressivism' is nearing the end of the line, even without the size of the debt that Kotlikoff claims. The worst hasn't happened yet because the U.S. Treasury and Federal Reserve have been able to pressure foreign central banks to keep the U.S. dollar as the world's major reserve currency, and because other currencies aren't seen as a great refuge for money at this time.

But U.S. dollar hegemony has been in decline since the arrival of the euro and the rise of Russia's non-OPEC oil sales policy; the decline will accelerate as central banks more greatly diversify their foreign currency reserves. When the U.S. government can no longer shore up its industry in U.S. dollar sales, the economy will go into free fall if the U.S. debt isn't already greatly reduced.

So critics have things turned around when they complain that the Tea Partiers are against the very idea of federal government. The people in the movement have simply seen the writing the wall: the era of big government in the USA is headed for a crash. Their political strategy is aimed at creating a soft landing for Americans.

Glenn Beck's strategy is not the same as the Tea Partiers' even though he supports their general viewpoint and several Tea Party candidates. He's seen the same writing on the wall, but his approach to averting the worst scenario addresses an issue that's more fundamental than politics. Beck looked at America's political problems then drilled down to bedrock. This caused him to conclude that any people who spend themselves and their future generation into massive debt have bad character.

He's put a lot of pretty bows and sparkles on his conclusion in order to make it more pleasant for the public, but it was at the heart of the Restoring Honor rally. The message was that before you set out to improve your government first improve your character; this, on the theory that people with crummy character persistently nominate and elect scoundrels to political office.

Glenn Beck's message has gone over like bacon at a bar mitzvah among certain political conservatives and CEOs. They want good consumers, a good labor force, and good relations with countries that America does big trade with. They don't want to see an emphasis on good character, for all the Bible-thumping some of them do. That's because as soon as one places a high value on character, there goes the neighborhood: first better character, then better conscience, then where will the United States be in the ruthless pecking order of trading nations?

As to how to develop a better character as fast as possible -- the program for the Restoring Honor rally was Glenn's best answer. Part 2 will describe how I view the answer, which I have some disagreement with.
Posted by Pundita at 10/31/2010 10:50:00 AM

My take is that this is the war of the ego. Can Jon and Steven best the Won?

This is all about ratings, and a lot of hard core chest thumping. The children don't understand the difference between reality and teevee.