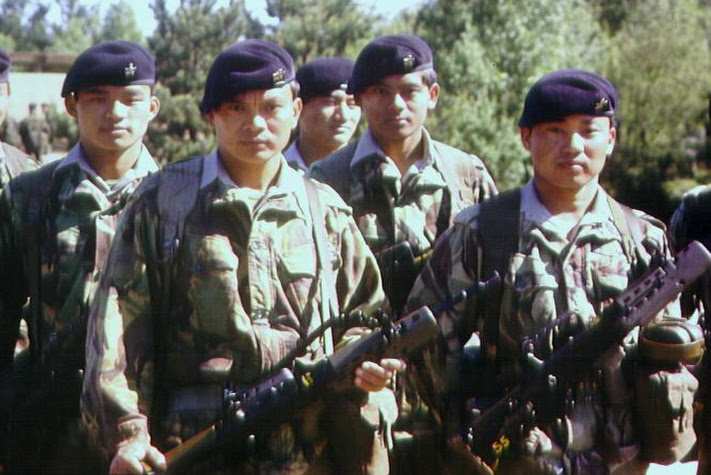 Yes I know there has been a Gurkha unit in Afghanistan; the 1st Battalion, Royal Gurkha Rifles, has been serving in southern Helmand province and of course doing a splendid job. They're returning to their base in England next month. But we really need Gurkha units at the border checkpoints.

With regard to the Afghan border police at Spin Boldak, the ISAF has had to make a deal with the devil because the NATO regimes, including the U.S. one, refuse to deal with Pakistan's military in appropriate fashion. This October 26 Washington Post report, U.S. operations in Kandahar push out Taliban, (which I feature in its entirety at the end of this post) does not go anywhere near telling the real story about the heroic Afghan Police Colonel Abdul Raziq, the leader of a tribal militia and border police force that extends across Kandahar and Helmand provinces.

Yes the colonel is very brave; a great fighter, a great leader -- a man who fights out in front of his troops the way real military commanders used to do -- and he is killing many Taliban. He is also a fiend.

Here is the real story about the colonel, whose name is spelled somewhat differently depending on the reporter. No matter how you spell it -- Abdul Razik, Abdul Raziq, Abdul Razziq -- it's the same Afghan warlord who is right now pulling General Petraeus's irons out of the fire in Kandahar.

And note that Carlotta Gall's October 21 report for The New York Times, which broke the story that the U.S. military was "routing" the Taliban from Kandahar, does not mention the efforts of the colonel; it cites only an amazing 'new' mobile rocket with pinpoint accuracy as a factor in the rout. There's an amazing mobile rocket, all right; its name is Abdul Raziq.

But the colonel's help is not a solution, and it is creating just as many problems as it solves. From Afghanistan Analysts Network, 2010 Elections 29: Losing legitimacy - Kandahar's preliminary winners:

There has been some very positive news coming out of Kandahar province lately, as the New York Times' Carlotta Gall has reported. According to ISAF and Afghan government officials, the Taliban have been "routed" from the province by a massive military offensive, partly with the help of a miraculous rocket launcher, the HIMARS system, which, though not exactly "new" as claimed in the Times piece, certainly sounds impressive. The news is all the more remarkable in that it closely follows the timetable that was laid down by military officials throughout the summer.

It's a pity, then, that this moment of military triumphalism should be marred by the impending election -- barring Electoral Complaints Council (ECC) intervention -- of an extremely dubious slate of Afghan parliamentary candidates, one that underscores how tenuous the connection is between the people of Kandahar and their government.

[Election] Observers were anticipating extreme fraud in Kandahar, where what little security exists is dependent on strongmen. The most notable of these is the young Border Police colonel Abdul Raziq, who commands a large, mostly Achekzai militia based out of the key border town of Spin Boldak. In the 2009 presidential elections, Raziq proved that he could deliver vote counts through his commander network that extends through the districts of Maruf, Arghestan, Spin Boldak, Reg, Shorawak, and Daman. This year, he seems to have been elevated, in some respects, to a role in the elections equal to Ahmed Wali Karzai’s. [...]

The paragraphs I've snipped from the AAN report are too depressing to read unless you don't mind wearing sackcloth and ashes for the rest of the day.

The photograph of Afghan border police in the "key" border town of Spin Boldak was taken by the AAN report's co-author, Matthieu Aikins, and used for Foreign Policy magazine's crosspost of the AAN report. The photo of the Gurkhas is from the BBC but they don't identify the unit.

All right; I'm now going to go sprinkle more ashes on my head and take a swig from the sherry bottle -- for medicinal purposes only, of course.

KANDAHAR, AFGHANISTAN - With 2,000-pound bombs, 12,000 troops and one illiterate but charismatic Afghan border police commander, the U.S. military has forced insurgents to retreat from key parts of this strategically vital region, according to U.S. and Afghan commanders.

The developments are far from decisive, but senior military leaders believe they have made progress on the western outskirts of Kandahar city and in the pomegranate orchards of the Arghandab River valley. The ground remains treacherous, seeded with bombs that reverberate daily through the city.

The Taliban departure from some areas could be a strategic response to an operation NATO has trumpeted for months. Or insurgents could be lying low, developing new avenues of attack. NATO forces have cleared villages before, including in Kandahar province, and failed to hold them. Whether insurgents can be kept away this time, or prevented from grabbing new parts of the city or its surroundings, remains to be seen.

The most unexpected, and potentially risky, aspect of NATO's resurgence is Abdul Razziq, the 32-year-old police colonel best known for allegations of pocketing millions of dollars in illegal customs dues, who has left the border to lead hundreds of his militiamen into Taliban-held villages that have bedeviled NATO troops for years.

Behind Razziq's hardened fighters -- who possess a local knowledge that police officers and soldiers from Afghanistan's national security forces cannot match -- American soldiers have taken back territory previously out of reach. He has led clearing operations in all of the areas central to the American campaign here - Panjwayi, Zhari, Arghandab and Kandahar city - and has captured hundreds of Taliban fighters.

"He's like a folk hero now," said Col. Jeffrey Martindale, who commands a U.S. Army brigade in Kandahar. "The Taliban fear him."

Afghans who live in these areas, and have witnessed earlier clearing operations give way to Taliban comebacks, often do not share the U.S. military's optimism. And some believe insurgents may be moving into the city to avoid U.S. troops on the periphery.

"Security in the city is now drastically worse," said Samsor Afghan, 27, a university student who runs a computer software store downtown, across the street from where a suicide bomber attacked the day before.

"The Taliban are everywhere. We don't feel safe even inside the city."

American commanders have nevertheless been buoyed by changes in areas where the bulk of their forces are located. Among the shifts is what they describe as a new assertiveness from Afghan security forces, which now outnumber NATO troops in this operation.

Officers trace the change to one night in mid-August, when Kandahar's governor, Toryalai Wesa, called President Hamid Karzai to report that Taliban forces were blocking a road and searching cars in Malajat, an insurgent stronghold in western Kandahar city.

"Could you, Mr. President, order NATO to come and help us?" Wesa asked, according to an Afghan official present in the palace.

"Shame on you," Karzai replied.

Karzai had recently issued a decree instructing governors to act as the commander of all Afghan security forces in their provinces. He told Wesa to assemble his own force and respond. "Go after them. Don't wait for NATO," he said.

Just hours later, Wesa had cobbled together a few hundred Afghan police, soldiers and intelligence officers and sent them into Malajat, a move that surprised the Americans in Kandahar. The operation began with Afghan government forces capturing 11 insurgents, but the contingent was soon trapped in a minefield. Five Afghans were killed getting out.

Wesa emerged chastened from the operation, U.S. officials said. For a second run at Malajat, the solution was Razziq. On the border, he developed an outsize reputation - part Robin Hood, part warlord. He was a close ally of the Karzais with thousands of tribal warriors at his command.

"If you need a mad dog on a leash, he's not a bad one to have," said a U.S. official in Kandahar.

U.S. troops hastily planned support and coordinated to have Afghan forces ring the neighborhood, while Razziq, cellphone and satellite phone in hand, roared up from the southern desert with a few hundred men. They arrested about 20 suspected insurgents and found scores of explosives.

There was little violence, but U.S. troops noted Razziq's style. At one point, his men spotted a stolen Afghan police truck. They fired at it with a rocket-propelled grenade, which deflected off the truck and exploded in the trees. Suddenly a man in white robes fell from the branches, blowing up when his suicide vest hit the ground, which then blew up the truck - a story that Razziq chuckles in recalling, U.S. officials said.

[Pundita note: another part of this famous tale is that some of Razziq's men screamed and ran at the sight of the Taliban in white robes, thinking they'd seen a ghost.]

As this partnership has developed, Razziq has been partnered with a U.S. Special Forces commander to help coordinate his moves. He has been called on elsewhere, including particularly treacherous parts of the Arghandab River valley, where whole villages had been rigged with explosives that had made them impenetrable to previous American units.

The Afghan operations have stunned U.S. troops, accustomed to years of prodding along their reluctant allies. At 3 a.m. on Sept. 15, Capt. Mikel Resnick, a company commander in Arghandab, learned that 1,000 Afghan troops were moving into his area.

"I don't know if they're going to go burn the orchards down and leave me to clean it up," he said of his initial reaction to the plan.

The Afghans, who took 72 hours to capture 50 detainees, five large bombs and 500 pounds of explosives, required only advice and air support from the Americans, said Lt. Col. Rodger Lemons, the battalion commander at the Arghandab district center.

"We basically sat in here and monitored the fight," Resnick said, referring to his outpost at the village of Sarkari Bagh. "They essentially cleared this entire place out."

U.S. military officials acknowledge that it is not ideal to have the border police leading the operation, because the goal is for the Afghan army and police to provide security in their own areas.

"We need to make sure this is not undermining the legitimacy of the Afghan government," said a senior NATO military official in southern Afghanistan.

The fight in Kandahar, unlike the previous U.S.-led operation in Marja, has also benefited from a more intensive campaign by U.S. Special Operations forces to hunt down Taliban commanders and bomb-making networks before the infantry push.

During the Kandahar operation, Americans have unleashed ferocious air bombardments. In some parts of the Arghandab, U.S. troops discovered the Taliban had cleared out whole villages and rigged each house with homemade explosives.

In one October operation to clear the way for Razziq's troops, American aircraft dropped about 25 2,000-pound bombs and twice as many 500-pound bombs, while also firing powerful rockets over the ridge from the Kandahar Airfield miles away.

"We obliterated those towns. They're not there at all," Martindale said. "These are just parking lots right now."

Martindale said civilians had long ago fled the Taliban-dominated area, and that the U.S. attacks did not cause civilian casualties - a claim that could not be independently verified.

Faced with the NATO and Afghan push, American commanders believe that many Taliban leaders have retreated to Pakistan, leaving lower-level fighters to stage attacks in Kandahar. Part of this appears to be the normal ebb of fighting in Afghanistan, as insurgents slow their tempo in the colder months.

Afghans living in Zhari and Panjwayi cited many complaints with the current operations, including homes and orchards damaged by American troops, no government support for the people and elusive Taliban guerrillas who dodge the conventional armies.

Of course they'll continue to come back unless there are better border controls and NATO stops playing patty-cake with Pakistan's military and civilian leaders.