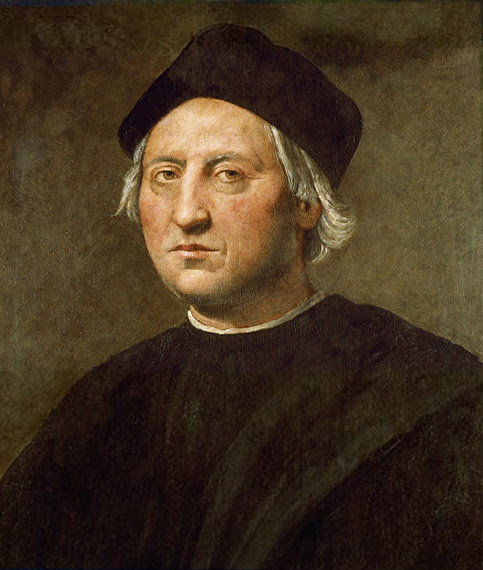 Today is a federal holiday in the USA -- the day the United States joins with much of Latin America and the Caribbean countries to officially celebrate the arrival of Cristoforo Colombo, or as we call him, Christopher Columbus, in the 'new world' on October 12, 1492.

Columbus was so unreasonable, so obstinate in his views, that the reason the United States of America isn't called Columbia is that against all evidence to the contrary he insisted to his dying day that he'd found India. Thus, the honor of having the new world named after him passed to another great explorer, Amerigo Vespucci, who reasonably argued that Columbus had landed on a continent previously unknown to Europeans, not the shores of India.

Yet Christopher Columbus had so many gifts that to attempt to describe him in a few words is out of the question. He also possessed the epic courage and insatiable curiosity about the world that marked the greatest sailors and explorers of his day, which I pay tribute to with this excerpt from Wikipedia's article about him:

On 5 December 1502, Christopher Columbus and his crew found themselves in a storm unlike any they had ever experienced. In his journal Columbus writes:

"For nine days I was as one lost, without hope of life. Eyes never beheld the sea so angry, so high, so covered with foam. The wind not only prevented our progress, but offered no opportunity to run behind any headland for shelter; hence we were forced to keep out in this bloody ocean, seething like a pot on a hot fire. Never did the sky look more terrible; for one whole day and night it blazed like a furnace, and the lightning broke with such violence that each time I wondered if it had carried off my spars and sails; the flashes came with such fury and frightfulness that we all thought that the ship would be blasted. All this time the water never ceased to fall from the sky; I do not say it rained, for it was like another deluge. The men were so worn out that they longed for death to end their dreadful suffering."