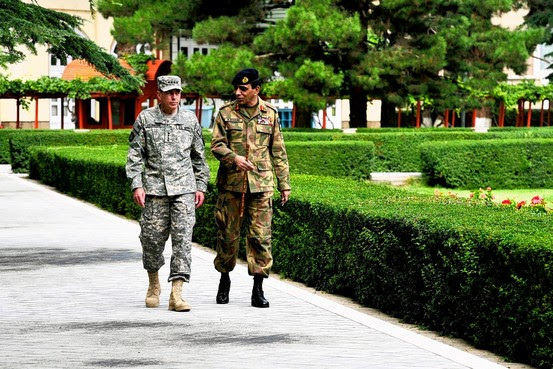 Is the promise of yet more aid money an attempt to placate Rawalpindi ahead of Obama's trip to India, or is this Mullen or Petraeus's idea of how to do counterinsurgency? Does it matter what color the knife handle is?

WASHINGTON — The Obama administration is planning to ramp up military support to the Pakistani army as part of an effort to persuade Islamabad to do far more to combat Islamic militants.

Top U.S. policy makers, who will meet with their Pakistani counterparts in Washington this week [Oct 20-22], say they doubt Islamabad will agree in the near term to mount a major army campaign against al Qaeda-linked militants in their biggest sanctuary bordering Afghanistan, officials say.

Instead, American officials are pushing Pakistan to agree to interim steps to increase pressure on the militant groups, such as by carrying out more targeted operations using U.S.-trained special operations units, according to officials close to the deliberations.

U.S. frustration with Pakistan has grown over what American officials see as Islamabad's unwillingness to mount a campaign against militants who have havens in North Waziristan and Baluchistan. North Waziristan is the main base for operations for the Haqqani network, an extremist group that frequently attacks U.S. forces in eastern Afghanistan and has close ties to al Qaeda, which also takes refuge in the area. Leaders of the Afghan Taliban are based in Baluchistan.

Pakistani officials said Islamabad is willing to step up the current level of surgical strikes. But they said a full-scale clearing operation in North Waziristan isn't possible because large numbers of its troops and equipment are being used to respond to recent devastating flooding, the country's worst yet, and are being used to rout militants from other areas.

The new military aid, which is contingent on congressional approval, is expected to amount to more than $2 billion over five years, would pay for equipment Pakistan can use for counterinsurgency and counterterror operations. U.S. officials say they hope the new aid could effectively eliminate Pakistan's objections that it doesn't have the equipment needed to launch more operations in tribal areas.

Department of Defense officials, including Adm. Michael Mullen, chairman of the Joint Chiefs of Staff, will meet on Wednesday with Pakistani Army Chief of Staff Gen. Ashfaq Kayani at the Pentagon.

In a recent report to Congress, the White House said it believed the Pakistani military was avoiding direct conflict with the Afghan Taliban and al Qaeda forces for political reasons. Despite the U.S. calls for a crackdown on the Haqqani network, some Pakistani officials continue to support the group, viewing it as a longtime ally that has steadfastly opposed Indian involvement in Afghanistan.

Pakistan received about $1.9 billion in military assistance from the U.S. in fiscal 2010, which ended Sept. 30, including about $300 million in grants to buy U.S. defense equipment. The new package of defense equipment would average out to an additional $100 million a year in aid, although the size of the grants would start lower and grow over time.

By seeking assurances from Pakistan that the new equipment will be used only to combat militants in the border areas, the U.S. hopes to reassure India that it isn't trying to further boost the power of Pakistan's conventional military.

Officials from both the U.S. and Pakistan rejected the notion that the military assistance and talks were a quid pro quo, arguing that they are trying to build a partnership, not cut a deal.

U.S. officials, although they denied that the increased aid was part of an explicit deal to get Islamabad to mount a ground offensive in North Waziristan, said they hoped increased Pakistani military capabilities would translate into increased action on the ground.

"It would seem natural that they could become more aggressive" in the tribal areas, said one American official.

The U.S. trains Pakistan's paramilitary Frontier Corps, as well as members of the country's regular army, air force and navy. In 2010 alone, more than 1,100 Pakistani special operations troops were trained by the U.S., according to a recent White House report to Congress.

U.S. officials hope that this week's talks also result in an agreement on ways to make joint border-control centers and intelligence fusion centers more effective. The border-control centers, most on the Afghan side, help Pakistan, Afghanistan and the U.S. share information and coordinate cross-border operations. Intelligence fusion centers, most in Pakistan, share video feeds from drones and help develop target lists.

U.S. and Pakistani officials also emphasized that if Washington pushes too much it could undermine recent progress and erode Islamabad's will to fight in the tribal areas. "This is our war now; that is the biggest achievement of the last two years," said a Pakistani official.

The new military aid, which would complement an existing five-year, $7.5 billion nonmilitary package approved last year, will require U.S. congressional approval. Key members of Congress, upset by Pakistan's inaction in North Waziristan and concerned about the Pakistani army's human-rights record in the tribal areas, could hold up part or all of the funding and impose conditions of their own. "There is a lot of skepticism," said one a senior aide of the sentiment in Congress.

Islamabad remains skeptical of U.S. pressure to push into North Waziristan, playing down the region's importance as a safe haven for terrorists. Gen. Athar Abbas, spokesman for the Pakistan army, said the importance of North Waziristan as a base for hardened Taliban fighters had been exaggerated by U.S. officials.

"The effect of the Haqqani network in disturbing the U.S. in Afghanistan has been overblown," he said.

American officials hope that expanding the work of the joint U.S.-Pakistani intelligence fusion centers could help the Central Intelligence Agency improve its targeting of members of the Haqqani network and other militants.

The CIA has stepped up strikes on militant targets in the region using armed aerial drones, in part to add to pressure on the Haqqanis and the Afghan Taliban, but also to try to disrupt a suspected terrorist plot to strike Western Europe.

Speaking to a small group of reporters on Tuesday, CIA Director Leon Panetta said the stepped-up campaign were "taking a serious toll" on the Haqqani network. "All of that, I think, must be having an impact," he said.

Tom Wright in Islamabad contributed to this article.