Oddly enough the BND, which has been deaf and blind to Ankara's oil trade with Islamic State, is sharp as a tack when it comes to Al Saud's destabilizing actions in the Middle East. So which is it? Is Germany's premier intelligence agency on top of things or doddering?

Perhaps insight is found in the Hungarian Prime Minister's claim: Germany made secret pact with Turkey for the EU to take half a million Syrian refugees. The Independent reports that "EU officials vociferously deny the suggestions of a secret deal with Ankara."

And if Turkey asks for an arm, Mr Tusk? 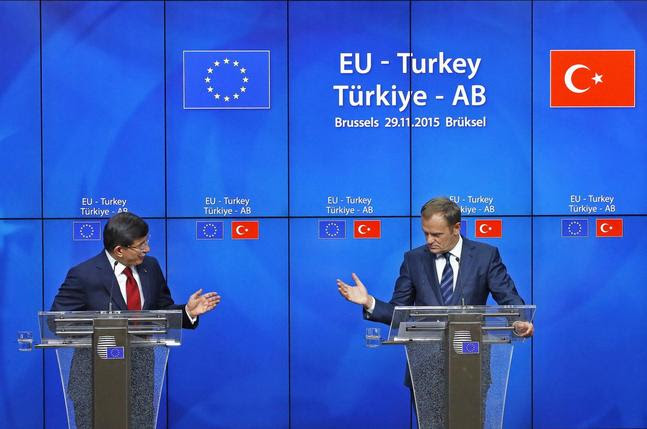 Turkey promised to help stem the flow of migrants to Europe in return for cash, visas and renewed talks on joining the EU in a deal struck on Sunday that the Turkish prime minister called a "new beginning" for the uneasy neighbors.

Leaders of the European Union met Turkish premier Ahmet Davutoglu in Brussels on Sunday to finalize an agreement hammered out by diplomats over the past month, as Europeans struggle to limit the strain on their 28-nation bloc from taking in hundreds of thousands of Syrian refugees.

A key element is 3 billion euros ($3.2 billion) in EU aid for the 2.2 million Syrians now in Turkey. The money is intended to raise their living standards and so persuade more of them to stay put rather than attempt perilous crossings to the EU via the Greek islands.

The final offer of "an initial" 3 billion euros represents a compromise between the EU, which offered that sum over two years, and Turkey, which wanted it every year. Now the money, as French President Francois Hollande said, will be paid out bit by bit as conditions are met, leaving the total payout unclear.

"As Turkey is making an effort to take in refugees -- who will not come to Europe -- it's reasonable that Turkey receive help from Europe to accommodate those refugees," Hollande told reporters. He added that the deal should also make it easier to check migrants arriving and keep out those who pose a threat, like Islamic State militants who struck Paris two weeks ago.

Also on offer to Ankara, which wants to revive relations with its European neighbors after years of coolness as it faces trouble in the Middle East and from Russia, is a "re-energized" negotiating process on Turkish membership of the EU, even if few expect it to join soon.

Many Turks could also benefit from visa-free travel to Europe's Schengen zone within a year if Turkey meets conditions on tightening its borders in the east to Asian migrants and moves other benchmarks on reducing departures to Europe.

"Today is a historic day in our accession process to the EU," Davutoglu told reporters on arrival. "I am grateful to all European leaders for this new beginning."