Syrian Army and allies having a party. Sorry Americans, we're too important to attend

It's okay; the American-led 65 member coalition will show up for the photo ops when the Syrian Army and its 5 member coalition finish routing Islamic State from Syria. [spitting into the spittoon I've just bought and installed next to the computer for Pentagon and White House briefings on the war] Pundita, don't be childish. Keep a civil tongue in your head. [spitting] Oh, I see; it's so you don't lapse into foul language. All right. Shall we proceed or do you want to act out some more?

So much war news I can't keep up any longer but a few snapshots:
Syrian Army kills more than 100 enemy combatants in Hama and much more, retakes another air base, inches nearer Palmyra; Syrian women fighters protect Christian towns. Hey! Get the kid off the battlefield! What are they doing now, sending five year-old girls to chase IS?  Oh, she's Saudi, is she? What is this, Be Nice to Saudi Children Week at Pundita blog? Get her out of my sight. 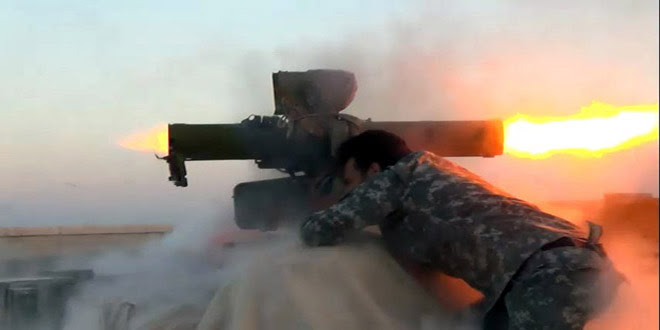 Hezbollah TV and Syrian activists say Syrian forces have seized control of a military air base in a suburb of Damascus following intense clashes and airstrikes.


The Marj al-Sultan air base lies in the mostly opposition-held eastern suburb of Damascus known as Eastern Ghouta. It has been held by rebels for three years.

The base's capture is a victory for Syrian troops and their allies from the Lebanese militant Hezbollah group who are fighting under Russian air cover in the area.

Hezbollah's Al-Manar TV and the Syrian Observatory for Human Rights, which tracks the civil war in Syria, reported the capture of Marj al-Sultan on Monday. They say fighting is still underway to gain control of the entire village.

[...]
****
All right, that's enough from AP. Too much yippity-yap. I like SANA's reports: this happened today, that happened, bye.

The army, in cooperation with popular defense groups, established full control on Marj al-Sultan village, the Airport and the near farms, as well as the southern farms of al-Blaliya in Eastern al-Ghouta.

Earlier, army units advanced in the western and northeast parts of Marj al-Sultan village and established control over a number of buildings and tightened its grip on almost the entire village in Damascus Countryside, source on the ground told SANA.

The sources confirmed that due to the army’s operation,s the supply-routes of terrorists between Marj al-Sultan and Harasta al-Qantra are now under army’s control.
The Army destroyed terrorists’ dens with all weapons and ammunitions inside them in Zabdin village and a car in the farms of Deir al-Assafir.

In Douma area, army units targeted terrorists’ gatherings in Jisr al-Ab and the farms of Alyia and Hijaria.

A rocket launcher, mortar launcher and a site of Jaish al-Islam were destroyed and 7 terrorists were killed including Faris al-Airot, Taisir al-Sheikh Bakri, Maher al-Hot and Taisir al-Saour.

Army and Armed Forces units thwarted a terrorist attack launched by members of “Jaish al-Fateh” (Conquest Army) terrorist organization on a number of military posts in the northern countryside of Hama central province on Sunday night.

A military source told SANA that during the last 24 hours, army units engaged in heavy clashes with armed terrorist groups which tried to infiltrate military posts in the villages and towns of al- Bwaida, al-Masasineh, Zilin, al-Mahroukah, Zour and al-Zalaqiyat in Hama.

The source added that the army killed more than 100 terrorists and destroyed 2 armored vehicles and other machinegun-equipped vehicles.

Sources on the ground told SANA’s reporter that 13 vehicles, 3 B9 cannons, 20 makeshift “hell cannons,” and 23 mortar launchers were destroyed during the clashes.

Later on Monday, the Syrian Air Force carried out airstrikes against the positions and gatherings of Jabhat al-Nusra in the villages and towns of al-Latamina, al-Zakat, Lahaia, and Maarkaba in the northern countryside of Hama, inflicting severe losses upon their ranks in personnel and destroying their machinegun-equipped vehicles.

Meanwhile in Idleb countryside, the Air Force’s airstrikes destroyed terrorists’ fortified positions and vehicles in Saraqib town to the southeast of Idleb city.

Army and Armed Forces units, assisted by the Syrian Air Force, destroyed gatherings and vehicles for terrorist organizations in Aleppo and their supply routes connecting them to Turkey.

A military source said in a statement to SANA that army units carried out precision operations against hotbeds and movements of Jabhat al-Nusra and other terrorist organizations in al-Sakhour and Suleiman al-Halabi neighborhoods in Aleppo city, destroying a convoy of vehicles equipped with heavy machineguns.

In a special operation, another army unit eliminated all members of a terrorist group and destroyed two vehicles along with all terrorists on board in al-Layramoun area in the northern part of the city.

Another unit destroyed bases and supply routes of terrorist organizations during concentrated operations in Ain al-Beida village 123 kilometers to the northeast of Aleppo.

In the southern countryside of the province, army units inflicted heavy losses in arms, munitions, and machinegun-equipped vehicles used by Jabhat al-Nusra terrorists and other groups affiliated to it in Qrasi and Tal Bajar villages, according to the military source.

Bases, fortified sites, and vehicles for ISIS terrorists were also destroyed during intensive strikes by the army in Shweilekh, Jrouf, Ain al-Hanash, and north al-Hamra village near Maskanah, and al-Bab city in the eastern countryside of Aleppo.

Meanwhile, the Syrian Air force carried out morning sorties against bases and fortified sites of ISIS terrorists in Jub Ghabsheh, Njarah, Rasm al-Kabeer villages and al-Bab city, destroying them along with all terrorists, arms, and vehicles inside.

An army unit carried out a concentrated operation targeting a convoy of machinegun-equipped vehicles which was moving between the Waqom and Dama villages in the northwest countryside of Sweida.

A number of vehicles along with all terrorists and weaponry were destroyed during the operation.
Meanwhile in Daraa, an army unit destroyed a terrorists’ gathering in Aba Zaid neighborhood in addition to destroying mortar launcher, makeshift “hell cannon” and terrorists’ vehicles in the southern side of al-Manshia neighborhood in Daraa al-Balad area.

The Army Air force carried out sorties against gatherings and fortifications of ISIS terrorists in the eastern countryside of Homs.

A military source said in a statement to SANA that the strikes destroyed vehicles for terrorists to the east of Palmyra which were coming from al-Raqqa to commit crimes and massacres against residential gatherings in al-Badiya (desert).

ISIS terrorists suffered heavy losses to the east of al-Bayda al-Sharqiya village and al-Hadath area 80 kilometers to the south east of Homs.

The Syrian Arab Army has launched an unprecedented airstrike campaign in terms of its scale against Daesh targets in the province of Homs, close to the world-famous city of Palmyra, the Fars news agency reported, citing unnamed sources.

Damascus warplanes are said to have bombed terrorist strongholds in four different areas, including al-Quaryatayn, Hawareen, al-Hadath and Mahasa. Approximately 20 militants were killed in the airstrikes.

"The air attacks have paved the way for the country's ground forces to recapture the [abovementioned] towns and villages and advance towards the ancient city of Palmyra (Tadmur)," the media outlet quoted the sources as saying.

Syrian Women Unite to Save Christian Towns From Daesh

Members of the battalion called the 'Female Protection Forces of the Land Between the Two Rivers' come from different backgrounds, united by the drive to protect the future of their country and families.

An all-female militia group in Syria is graduating from its training camp in the northeastern town of Al-Qahtaniyeh. The determined women mostly come from Christian backgrounds and are taking up arms to challenge the traditional ideas of Syrian women being just housekeepers.

Thousands of Syrians have fled their homes after the jihadists seized their towns. Syrians belonging to a different religion were forced to convert or face death.

“I’m not afraid of the Daesh, and we will be present in the coming battles against the terrorists,” female fighter, Thabirtha Samir, 24, told AFP.

Another recruiter, Babylonia, 36, is a former hairdresser who was encouraged by her husband to take up arms to challenge the traditional ideas of Syrian women being just housekeepers.

She told AFP that she misses her two children, but is “fighting to protect their future”.

The YPJ group recently recaptured the town of Hol, a strategic location for Daesh on a key route between Syria and Iraq.
One of their commanders said: “They believe if someone from Daesh (ISIL) is killed by a girl, a Kurdish girl, they won’t go to heaven,” AFP reported.
[END REPORT]

Oh for Pete's sake. Well the parents shouldn't be taking children to protest rallies, is all I can say. FARS described the rally as huge? From the other photos it doesn't look huge to me; heck, Hezbollah can raise 100K in 15 minutes in Lebanon but I suppose it was huge for KSA:


TEHRAN (FNA)- Saudi people took to the streets in the kingdom's town of Qatif on the anniversary of the holy prophet's demise on Thursday to express their protest at the death sentences given to several political detainees and the country's ongoing crackdown on dissent.

See this is what happens when we hang out at FARS for Syrian war news. Can't afford to get involved with those people's problems. Syria is already too much. Then back to A'stan after SA5 finish off Islamic State. If there's still an A'stan by then.