It gets even wackier when you string out the entire tangled chain; e.g, Turkey is bombing Kurds that the U.S. is helping arm against Islamic State. This isn't even talking about the American Gulf  "allies" that are funneling money and arms to Terror Inc in Syria.

(The latest is that KSA has put together an Islamic coalitiion from a 34 nation bloc of nations to fight terrorism, which for some reason doesn't include Syria. Anyhow, their own Islamic NATO, I guess. And don't miss this read from yesterday:  EXCLUSIVE: Sarin materials brought via Turkey & mixed in Syrian ISIS camps – Turkish MP to RT)

What does it all mean? First of all, it's "AFPAK" all over again. When you know that Pakistan's military is orchestrating attacks on your troops, what you do is increase your funding to Pakistan's military and offer to sell the generals more military hardware. Substitute Turkey for Pakistan and Syria for Afghanistan and you have the general idea.

What it also means is that a group of U.S. senators and their lobbyists in the defense industry are in effect running the U.S. military and want a war with Russia because they think the Kremlin is too chicken to use tactical nukes.

And it means U.S. war policy is now a runaway freight train loaded with enough flammable material to take out a big chunk of a major American city when it crashes.

What it also means is that if everything collapses around the same time, we could be looking at de facto military rule in the United States about five years earlier than I'd previously estimated, which is to say within the next 3-6 months.

Now to the main events: Gregory Copley's latest analysis, which he's shared with the public; it's quite lengthy but of course an important read; below are the parts I believe urgently need discussion.

I would also advise listening to John Batchelor's discussion with him last night. (Podcast) Gregory had just returned from meetings on the European continent, to include Russia. One of his pit stops was dinner with Russian President Vladimir Putin and former Soviet Union President Mikhail  Gorbachev. So I think it's vital to listen to what he has to say in addition to his written analysis.

As to the optimistic title that Oil Price gave the analysis, those oil patch people are perennial optimists. And yet I don't think I would have wanted to hear exactly what Gorbachav told Copley.

Yet just for one moment, a pool of sanity in a situtation that's anything but sane. Photo courtesy of Russia's Foreign Ministry. Kerry and Lavrov met today in Moscow first at a "pre-meeting" to discuss the crisis and agreed that Islamic State poses a threat to all countries. Here's an AP report on the first meeting, filed at 4:09 EST. Frankly it sounds like a lot of hot air with neither side wanting to make concessions but at least the two get along. 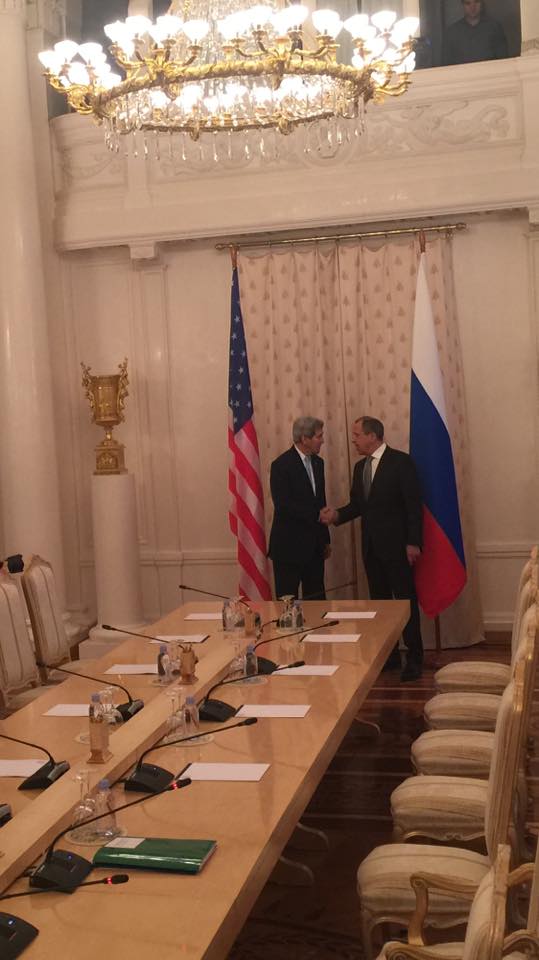 A couple more things before I turn over the floor to Copley -- Long War Journal's Bill Roggio and Thomas Joscelyn gave their weekly report to John Batchelor's audience last night. (Podcast) Steel yourself for a litany of bad news about the current U.S. prosecution of the long war and the punchline supplied by Batchelor: "Islamic State gets the headlines but al Qaeda is the monster."

Is The Russian-Turkish Standoff An Opportunity For The West?
By Gregory Copley
December 14, 2105 at 22:47.
Oil Price

Russia has claimed, in its treatment of the November 24, 2015, incident, that Ankara shot down the Su-24 in order to protect the supply chain of oil tankers coming from oil wells captured by ISIS in Syria and Iraq. The Russian Air Force had been targeting those convoys of tankers, with some success, severely disrupting the flow of cash to ISIS. The Russian response to the shootdown was to publicize that mis-sion and to lay out evidence that the Turkish Government was totally complicit with the ISIS traffic, and therefore was a major component of the success of ISIS itself.

That ISIS has been selling oil from the captured wells since it took them over — literally at the beginning of its occupation of Iraqi, and then Syrian lands — has been well- known since it began. Moreover, it was common knowledge that the oil was being sent across the Turkish border, and that Turkish officials facili-tated this trade. Russia claimed, with some evidence, that Pres. Erdogan’s third son, Bilal [Necmettin Bilal Erdogan], 35, was a key manager of this supply chain, and that he and his associates (including his father) were amassing a considerable fortune as a result. Tankers belonging to Bilal’s company, BMZ Ltd., are reported to be transporting the illegal oil to Japan.

In an August 26, 2014, report entitled “Why the Islamic Caliphate May Be the Key to Transforming Regional Alliances in the Greater Middle East”, in Defense & Foreign Affairs Special Analysis, the oil traffic was reported that ISIS leader [Abu Bakr] al-Baghdadi “cannot survive without Turkey’s support, both from the initial financial and weapons support, to the long-term logistical support.

By late August 2014, al- Baghdadi was working to broaden his land ‘border’ with Turkey in order to facili-tate better contact. The ‘caliphate’ needs to export the 800,000 barrels per day of oil production from the wells it captured in Syria and Iraq, and although it must do this through trucks, rather than pipelines, it is hoping for a stable traffic through Turkey, despite United Nations sanctions against the trade.

The ‘caliphate’ may be achieving as much as $3-million per day from illicit oil exports, insufficient to allow it to govern the territory it has seized.”

[Pundita note:  Reportedly Russsian strikes last month against the tankers chopped the estimated $3m figure in half, and they've probably made more of a dent this month -- although I've read that IS is now transferring the oil into smaller vehicles so they're harder to spot as oil delivery trucks. Of course the cumbersome tactic slows down their deliveries]

The oil trade has, since then, become far more organized and substantially more productive for ISIS and its Turkish partners, but it was clear that US officials have been abso-lutely aware of the traffic — and Ankara’s role in it — since the beginning.

So it is Moscow’s allegation that the Russian air strikes against the ISIS oil convoys, which threatened both the economics of the ISIS operation and the bank account of the Turkish President, resulting in An-kara’s urgent need to stop the Russian air operations. Given that the scope of the Turkish-ISIS oil piracy — and the breach of United Nations sanctions against ISIS — were well-known to Washington, it was disingenuous of the U.S. State Dept. to claim that it had no knowledge of the oil trade and no belief that the Turkish Government or President was engaged with it, thus making them — Erdogan and his Government — a critical ally of ISIS.
[...]