"The CIA under Alan Dulles placed Nazi ex-leaders as supervisors of almost all the secret services of the allied states on all five continents. This system was dismantled [only] in the 1970’s, after the revelations of the [U.S.] Church and Pike Congressional committees."

The following writing throws much light on many topics, including the present German regime's strange relationship with Turkey's President Erdogan and 'Washington's' relationship with the Muslim Brotherhood going back to the 1950s.

At this moment I am quite overwhelmed by all the revelations and can only manage one comment: It seems the U.S. deNazification project after World War II was not an unqualified success.

On a less sarcastic note, we now speak of the Cold War as not really ending with the dissolution of the USSR; I'm beginning to wonder if World War Two ever really ended.

All right; fasten your seatbelt.


Germany and Syria
by Thierry Meyssan

Relations between Germany and Syria, which used to be excellent under Emperor Wilhelm II, are today abysmal. This is because since the Cold War Berlin has become the backyard for the Muslim Brotherhood in their attempt to overthrow the Syrian Arab Republic. Since 2012, the Minister for Foreign Affairs and the federal think-tank SWP have been working directly on behalf of the US deep state for the destruction of the country. 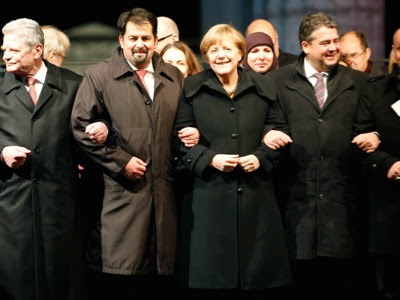 In Berlin, in January 2015, a march for tolerance united political and Muslim leaders in reaction to the attack on Charlie Hebdo in Paris. Madame Merkel marched arm in arm with Aiman Mazyek, general secretary of the Central Council of Muslims in Germany. Although he pretends to have broken with the Muslim Brotherhood, and maintains an open dialogue, Mr. Mazyek offers protection within his organisation to the Milli Gorus (the supremacist organisation of Recep Tayyip Erdoğan) and the Muslim Brotherhood (the matrix of jihadist organisations, under the international presidency of Mahmoud Ezzat, ex-right hand of Sayyid Qutb).

Historically, Germany maintained excellent relations with the Ottoman Empire at the beginning of the 20th century. Kaiser Wilhelm II, who was fascinated by Islam, pursued archeological excavations, notably in Baalbeck, and participated in the construction of the first railways, including the Damascus -Medina line. The Reich and the Sublime Porte stood together against the British when they organised the « Great Arab Revolt » of 1915. Then they lost the First World War, and as a result, were excluded from the region (Sykes-Picot-Sazovov agreements). 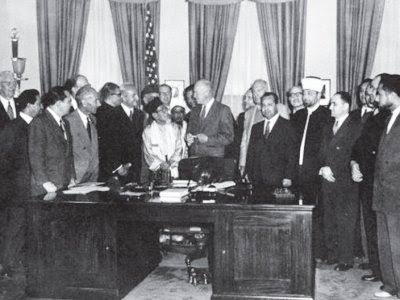 In 1953, President Eisenhower received a delegation of the Muslim Brotherhood led by Saïd Ramadan. From then on, the United States supported political Islam overseas.

During the Cold War, the CIA recuperated some of the best Nazi officers in order to continue its struggle against the USSR. Among them were Gerhard von Mende, who had recruited Soviet Muslims against Moscow [1]. In 1953, this senior civil servant installed the chief of the Muslim Brotherhood outside of Egypt, Saïd Ramadan, in Munich [2].

In the same period, the CIA secretly sent Nazi officers all over the world to fight the pro-Soviets. For example, Otto Skorzeny went to Egypt, Fazlollah Zahedi went to Iran, and Alois Brunner [3] to Syria. They all organised the local secret services on the model of the Gestapo. Brunner was only to be ousted much later, in 2000, by President Bachar [Bashar] el-Assad. 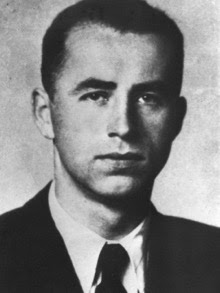 Alois Brunner, considered to be responsible for the deportation of 130,000 Jews, was installed by the CIA in Damascus in 1954, in order to prevent the régime of President Choukri al-Kouatli from concluding an alliance with the Soviets.

In the period between the Khomeinist revolution of 1979 and the attacks of 9/11, West Germany remained prudent in their dealings with the Muslim Brotherhood. However, at the demand of the CIA, and while Syria recognised East Germany, it accepted to offer political asylum to the putschists who attempted the coup d’etat of 1982 against President Hafez el-Assad, including the ex-Supreme Guide Issam al-Attar (brother of Syrian Vice-President Najah el-Attar). In the 1990’s, the Brotherhood reorganised itself in Germany with the assistance of two businessmen, the Syrian Ali Ghaleb Himmat and the Egyptian Youssef Nada, who was later to be accused by Washington of financing Oussma Ben Laden. 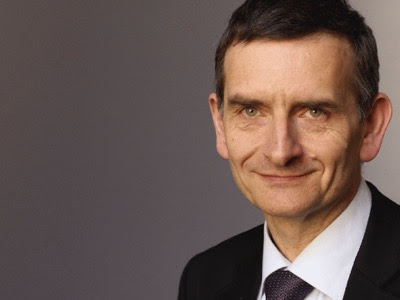 For many years, German academic Volker Perthes participated alongside the CIA in the preparation of the war against Syria. He directed the most powerful European think-tank, the Stiftung Wissenschaft und Politik (SWP), and took part, in the name of the UNO, in the Geneva negotiations .

When the United States began the « never-ending war » in the « Greater Middle East », the CIA encouraged reunified Germany to launch a « Dialogue with the Muslim world ». In Berlin, the Minister for Foreign Affairs based his work for that purpose mostly on the new local chief of the Brotherhood, Ibrahim el-Zayat, and on an expert, Volker Perthes, who would become the director of the main federal think-tank, the Foundation for Science and Politics (SWP).

In 2005, Germany participated in the assassination of Rafic Hariri by supplying the weapon which was used to kill him - (it was obviously not a classic explosive, contrary to the propaganda of the special « Tribunal ») [4]. Thereafter, Germany supplied the head of the UNO Enquiry, ex-prosecutor Detlev Mehlis [5], and his assistant, ex-police commissioner Gerhard Lehmann, who was implicated in the affair of secret CIA prisons. 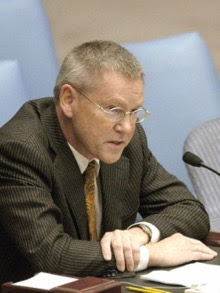 In the name of the UNO, Detlev Mehlis accused the Lebanese and Syrian Presidents, Emile Lahoud and Bachar el-Assad, of having assassinated Rafic Hariri. His work was based on false witness reports which, when revealed, forced him to resign.

In 2008, while the CIA was preparing the Syrian « civil war », Volker Perthes was invited by NATO to the annual reunion of the Bilderberg Group. He worked with a Syrian civil servant of the CIA, Bassma Kodmani. Together, they explained to all participants the profit that could be made by the West by overthrowing the Syrian Arab Republic and placing the Muslim Brotherhood in power.

Having adopted the double language of the Brotherhood, in 2001 he wrote an op-ed in the New York Times mocking President Assad who believed he had unearthed a « conspiracy » against his country [6]. In October of the same year, he participated in a meeting of Turkish business leaders organised by the private US intelligence agency, Stratfor. He told his listeners of the oil and gas resources that they could steal from Syria [7]. 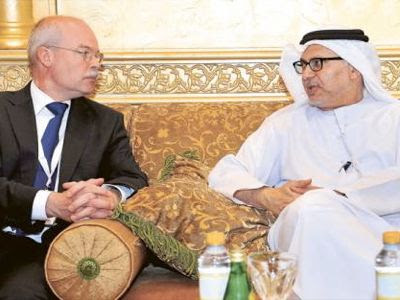 Clemens von Goetze (director of the 3rd department of the German Ministry for Foreign Affairs ) and Anwar Mohammad Gargash (Emirati Minister for Foreign Affairs), during the meeting in Abou Dhabi of the work group on the carving up of the Syrian economy.

Expanding this work, Germany organised in Abou Dhabi a meeting of the Friends of Syria under the presidency of one of its diplomats, Clemens von Goetze, who shared among those present the future concessions for exploitation which would be awarded to the winners once NATO overthrew the Syrian Arab Republic [8].

In mid-2012, Volker Perthes was tasked by the US Department of Defense with preparing « The Day After » (in other words the government which would be imposed on Syria). He organised meetings at the Ministry for Foreign Affairs with the participation of 45 Syrian personalities, including his friend Bassma Kodmani and Muslim Brother Radwan Ziadeh, who had come especially from Washington [9]. Finally, Perthes became one of Jeffrey Feltman’s assistants at the UNO. With that title, he participated in all the Geneva negotiations.

The positions of the German Ministry for Foreign Affairs were adopted word for word by the European External Action Service (EEAS) of Federica Mogherini. This administration, directed by a French senior civil servant, drew up confidential notes on Syria for the heads of state and government of the Union.

In 2015, Chancellor Angela Merkel and Turkish President, Recep Tayyip Erdoğan, who had become the world protector of the Muslim Brotherhood, organised the transfer of more than a million people to Germany [10], thus conforming to the demand by German industrial business leaders. A number of these migrants are Syrians, including those the AKP no longer wants, and which Germany does not want to return home.

Chancellor Angela Merkel will be in Beirut and Amman this week to talk about Syria.
Thierry Meyssan

[1] The CIA under Alan Dulles placed Nazi ex-leaders as supervisors of almost all the secret services of the allied states on all five continents. This system was dismantled in the 1970’s, after the revelations of the Church and Pike Congressional committees. All the Nazi leaders were chased out by President Carter and Admiral Stanfield Turner at the end of the 1970’s. The Europeans wrongly believed that the CIA used the Nazis exclusively in Latin America (for example, Klaus Barbie in Bolivia). But the system was in fact generalised, including in Europe (operation Gladio). In all probability, the placing of these Nazi « experts » was coordinated from Germany by Reinhard Gehlen, whom the CIA nominated as the first head of the Bundesnachrichtendienst (BND).
[2] A Mosque in Munich, Ian
Johnson, Houghton Mifflin Harcourt, 2011.
[3] Alois Brunner is believed to be responsible for the deportation and assassination of 130,000 people, in Austria, Greece, France, Germany and Slovakia. In 2001, he was sentenced in absentia to life imprisonment in France for his responsibility in the death of the children of Izieu.
[4] “Revelations on Rafik Hariri’s assassination”, by Thierry Meyssan, Оdnako (Russia) , Voltaire Network, 29 November 2010.
[5] “The disgrace of the Mehlis Commission”, by Talaat Ramih, Voltaire Network, 12 January 2006.
[6] “Is Assad Capable of Reform ?”, Volker Perthes, The New York Times, March 30, 2011.
[7] « Küresel Enerji Stratejileri Simülasyonu : Türkiye’nin Gelecek 10 Yılı », Tusaid, 6 Ekim 2011.
[8] “The “Friends of Syria” divvy up Syrian economy before conquest”, by German Foreign Policy, Voltaire Network, 30 June 2012.
[9] The Day After Project, August 2012. The Day After. Supporting a Democratic Transition in Syria, United States Institute of Peace & Stiftung Wissenschaft und Politik, August 2012.
[10] Turkey took over from Saudi Arabia after it had dropped the Brotherhood, following the speech by Donald Trump in Riyadh, 21 May 2017.

The articles on Voltaire Network may be freely reproduced provided the source is cited, their integrity is respected and they are not used for commercial purposes (license CC BY-NC-ND).