Who does Joshua Landis think he is? Daniel Webster?

Illustration from the short story The Devil and Daniel Webster: Attorney and orator Daniel Webster defends a client who sells his soul to the Devil then tries to get out of the deal while the Devil whispers in the judge's ear. Webster won the case. 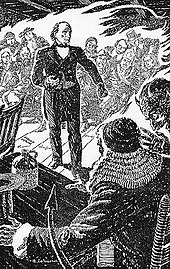 Now here we have one Joshua Landis,
who obviously thinks he can out-talk the Devil 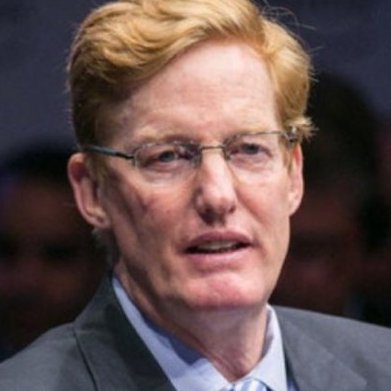 Granted, Mr Landis was raised in Saudi Arabia and Lebanon and is fluent in Arabic and French with some Turkish, Italian and Ottoman thrown in. So right there we can see how an American academic specializing in the Middle East might get it into his head that he can repeat ole Dan'l Webster's courtroom feat. But the glass is always half empty in Punditaland.

Oh all right, we'll give him a hearing:


1. The presumption undergirding the "Syria debate" - that Iranian influence is "malignant" & bad for Iraq, Syria and Lebanon - is misguided. By trying to roll back Iran, the US does more harm than good. US occupation of N. Syria & renewed sanctions are bad alternative.

2. Most important: what was the alternative to Iranian influence in the Levant? We must & can only presume the alternative would have been a victory of the Syrian opp, backed by KSA [Kingdom of Saudi Arabia]/Qatar. How would this possibly be better for the people of the region, the US, or even Israel?

3. What would a Saudi/Qatari victory look like? The alternative in 2015 was a Nusra [al Qaeda]/ISIS [Islamic State] victory. This is why Russia intervened on Assad's side. It wanted to preclude such an eventuality: ISIS taking Damascus. Listen to John Kerry explain why RU intervened. [YouTube 2 minute mark]. '"I lost the argument for use of force in Syria ..."


4. Iran is a more developed nation than the KSA. It has a broad & varied middle class that is by all accounts quite pro-American, skilled and has a lot to offer the region, probably more than does the Gulf.

5. This is the 1st time in mod history that the entire north tier of Mid East countries share good relations. Potential for development is immense. Gas & oil pipelines stretching from Iran to the Med: pilgrims, roads, tourists, commerce criss-crossing a region that was at war.

6. Iran is indispensable for the restoration of the region’s economy. Only Iran is capable of supporting the level of rebuilding needed after these years of war.

7. With redoubled US and EU sanctions, region is now crippled economically. West straining to stop reconstruction of any kind. US blocking highways from Damascus to Amman or to Baghdad. Stopping commerce with Lebanon.

8. By reimposing crippling sanctions on Iran, the only beneficiaries will be the hardliners in government and the corrupt elite. Ordinary Iranians, who have so much to offer the region, will seek to emigrate.

9.  What is the US likely to offer the region? Not much, it must be argued. Raqqa and Mosul are the poster children of US engagement in reconstruction activities. It is not promising:

10. The Kurds are beginning to despair the US can or will protect them in the long run or pay 4 reconstruction. They have reached out to Syr gov. US should facilitate the reunification of Syria, rather than seek to turn it into a quagmire for Iran.

11. All the countries of the region are suffering b/c the US has cut off trade and sanctioned Iran & Syria. Lebanon is cut off from its natural hinterland in Syria. Jordan has exploded in demonstrations b/c of economic hopelessness. Both need trade w/ Syria. So does Iraq.

12. Those who argue that Iran is a "malignant" force and dooms the future of the region must explain what the alternative is. Today, the US & the KSA do not offer a good alternative. They propose only sanctions and continued war by other means.

13. Many Iranian, Iraqi & Syrians pray for better governments, less corruption & greater freedoms. But the change that is being planned in Washington is unlikely to bring prosperity or reform. Only economic growth will lead to internal change & greater liberalism in the long run.

14. Israel can look after itself in Syria. Its military is far superior to Iran's. Few believe it cannot draw red lines to contain Iran in Syria. Better for US to provide Israel w/ help to limit Iran activity close to Golan, than have US troops sucked into Syria occupation.


15. Using the presence of the fairly inconsequential Liwa Al Baqir militia in Syria that is Iran backed & has verbally threatened US troops to justify a much larger and deleterious US policy in the region does not see the forest for the trees.

16. Washington should allow the governments of the region to rebuild. It should allow a new regional balance of power to emerge between Iran, KSA, Turkey & Israel without a heavy US military presence. The US should not seek to turn Syria into a quagmire for Iran and Russia.

17. The US can do much humanitarian good in the region by its example, by helping refugees, & by guiding a new balance of power that limits war & preserves region peace, reconciliation, & recovery.

[To] Those who will criticize this argument: We all know that the Syrian, Iraqi, & Iranian regimes are not "good" & have done bad things in war. The argument is that the US alternative of sanctions & continued occupation in order to roll back Iran is worse than allowing govs to rebuild.

You need to explain how the US strategy in the region will help the people of the region & improve US long-term interests.