June 14: Trump administration releases $6.6 million in funding for Syria's 'White Helmets.'  "The decision to release the funding came a day after the Organization for the Prohibition of Chemical Weapons (OPCW), the international chemical weapons watchdog, determined that sarin and chlorine were very likely used in a pair of chemical attacks in northern Syria in 2017." 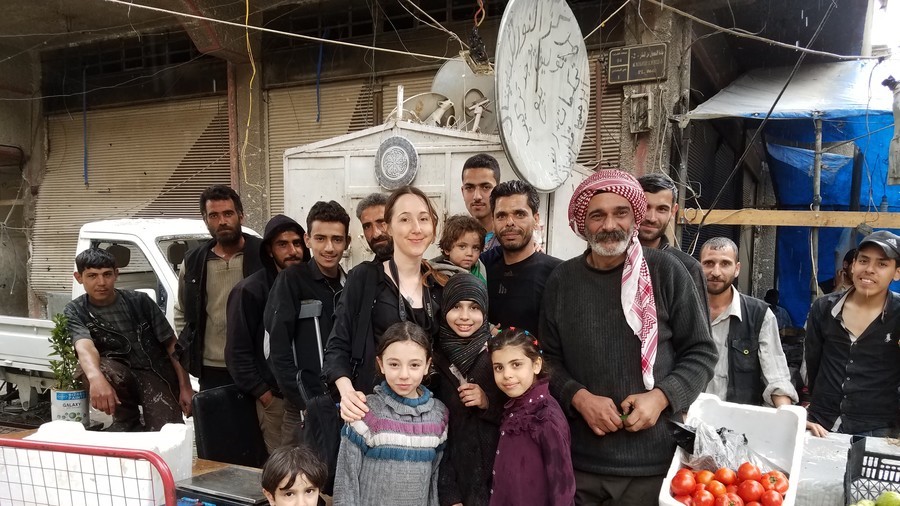 Last week I wrote about what civilians from Ghouta told me regarding unverified claims of the Syrian Army attacking them with chemicals, but they also talked about crimes committed by terrorists and the White Helmets’ role.

Although benignly dubbed “rebels” by corporate media, the Salafist terrorist group Jaysh al-Islam are not fighting for freedom or human rights in Syria, nor are the other terrorist groups who formerly ruled in eastern Ghouta.

They, Faylaq al-Rahman, and the other terrorist factions occupying the region reigned with terror, beheading men and women and starving the people.

Hellish rule of Jaysh al-Islam: Starvation and executions by sword

When I visited eastern Ghouta and the Horjilleh center for displaced people just south of Damascus—people mostly from Ghouta now—I asked about their lives under the rule of Jaysh al-Islam and others, including why they had been starving in the first place. The reply was, as I and others heard in eastern Aleppo, Madaya, and al-Waer, the terrorists stole aid and controlled all food, only selling food at extortionist prices which ordinary people could not afford.

Sabah al-Mushref spoke of the callousness of terrorists in Hammouriyeh and Zamalka towards children and how her own children used to scavenge from the garbage of terrorist leaders who had ample food.

“I was living in Zamalka, my children were almost dead of hunger, my daughter’s skin had turned yellow, she was malnourished,” Sabah told me. “I took her to the medical point, they said there was no medicine. I said, ‘my daughter is dying, what should I do?!’ They told me the medical point was only for Douma citizens. I went to the representative of Zamalka, I begged him, ‘Please give me anything for my children, they are starving, they haven’t eaten anything for two days.’ He said, ‘What is here is only for Zamalka citizens, you are from Marj al-Sultan, go to your representative. There is no aid for you here.’”

When I spoke with Sabah, she was with three other people from eastern Ghouta areas. Their testimonies spilled out, each one worse as they spoke out loud of the horrors they had lived through.

Mahmoud Souliman Khaled, 28, from Douma, spoke of his imprisonment and torture by Jaysh al-Islam.

“They stopped me at night, I was on my way to get something. They suspected that I was working for the regime, helping the army. They took me to al-Taoubah prison, where they tortured me. They would tie me to a chair and shock my hands or the top of my toes. They would tie two wires to my toes then plug the other end to the inverter and shock me. They would keep doing that until you confess to something. I didn’t confess, because I had nothing to confess to. They tortured me for two days. What they did caused me to have a severe myopia, it felt like electricity came out of my eyes.”

Khaled spoke of an execution he witnessed in Douma. “They came in a truck with a 23mm (anti-aircraft) machine gun and blew off his head. Then, they accused the Syrian Army of killing him.” A photo on his mobile phone showed a headless man sitting in a chair, no remnants of shelling.

“Jaysh al-Islam blew his head off for selling food cheaply, because they wanted to keep prices high, so that people stay impoverished and would have to work for them in tunneling or join them in fighting.”

In Kafr Batna on May 2 this year, the streets were busy with normal life and the clean-up process, electricity workers restoring power to the town. Outside a shop selling shawarma, Mou’taz Al-Aghdar spoke of being imprisoned for 15 days by Jaysh al-Islam for selling rice.

“They confiscated our goods and imprisoned us. Nobody was allowed to work unless that it was under control.”

He spoke of the executions by sword, and of disappeared children and adults, some returned with organs missing.

“We live in a small town, people started to talk: a child was kidnapped here, another one there... Some people were kidnapped and their organs were taken. A child was buried, he was found dead in a barn covered with straw, he was tied and covered with straw while he was still alive. We didn’t know who did it.” Other civilians from Ghouta have spoken of organ theft.

Further on, I encountered Mohammad Shakr, who pointed to the central roundabout and spoke of terrorists’ executions there.

“They’d bring people here and execute them, sometimes with a sword and other times with a gun. It was very normal for them. Now, since the Syrian Army came here, people can walk around and move freely. But before, you wouldn’t see anyone on the road.”

In an ice cream shop near the square, Abdallah Darbou also said he’d seen such executions. He also spoke of protests.

“Many times, we held protests against the terrorists, because we were starving, they were killing us. Sometimes they shot on us during the protests. They destroyed us, they really destroyed us. “The Syrian regime didn’t do that to us, when the army entered here they distributed bread to us, before that we only saw bread in photos.”

Walking around Douma on April 29, I met Yahya Mohammed Hamo, selling oranges on a push cart. When I asked him what life had been like under Jaysh al-Islam, he replied, “hunger, hunger, and hunger. If they have a religion, be cursed that religion. Religion doesn’t make them starve you.”

Men at a vegetable and fruit stand, who had replied with a resounding ‘no’ when I asked them about the chemical allegations, also spoke of the aid that was sent into Douma. An older man, exaggerating to make his point that there was ample food in Douma, said it was enough to last five years, but that the terrorists had deprived them of it.

I asked about the agricultural fields I’d seen when entering Douma. The reply was that Jaysh al-Islam had control over everything, the fertile land, the livestock. A youth told me that before the terrorists left Douma on the buses, they shot all the animals.

The men spoke of executions, making a throat-slitting gesture. A younger man recounted another murder, when the executioner put a pistol in someone’s mouth and pulled the trigger.

“Terrorism, they are the literal meaning of terrorism,” Toufik Zahra, the stand owner, said.

White Helmets not so benevolent, worked with terrorists

To my question on whether the White Helmets were helping people, Zahra replied:

In Kafr Batna, the Shawarma vendor, Mou'taz Al-Aghdar, said, “Jaysh Al-Islam used to attack us wearing a white helmet one day and leaving it behind another day.” The young man in the ice cream shop, Abdallah, replied that he didn’t know anything about the White Helmets because he and civilians in general weren’t allowed to go near them.

That in itself is strange, given their supposed focus is saving civilians, and given that the White Helmets had centers in Douma, Zamalka, and Saqba. The White Helmets center in Saqba wasless than 500 meters away from Kafr Batna. Notably, it was also just 200 meters down a lane from a building where Faylaq al-Rahman manufactured vast amounts of missiles and mortars.

Marwan Qreisheh, in the Horjilleh center, had a lot to say about the White Helmets.

“The first civil defense members who arrived to Ghouta three or four years ago came from foreign countries, they weren’t Arabs, didn’t speak Arabic. They were the terrorists’ defense, they used to terrorize. They had plenty of money and used it to attract people to join the civil defense.

When the White Helmets wanted to go somewhere, terrorists used to go with them and open the roads for them. The moment they would arrive at a place where they wanted to fake an attack, they threw 10 smoke bombs, causing heavy smoke, you couldn’t see anything. They used to shoot people, and after the smoke cleared, they start filming. It was impossible to say a word because they would kill you, they would empty their gun on you immediately.

If someone’s arm veins were cut, they would amputate immediately and stitch the wound, while filming. If someone’s leg was injured because of bullet, a piece of glass, or anything, their first treatment was amputation.”

Qreisheh’s claims about amputation were echoed by Hanadi Shakr, from Saqba, who worked for a year as a nurse until her husband, who had joined Jaysh al-Islam, forced her to quit.

“Every time there was a case that was a bit severe, they would say you must amputate this person. They would say that we are in short of medical supplies and so amputation is the best choice. They didn’t used to treat people. Even people who had minor surgery, they would just amputate it.”

Claims of lack of medical supplies turned out to be false, as in eastern Aleppo. In an underground hospital in Saqba alone, I saw rooms full of medicines and stolen medical equipment. Syrian journalists documented such stores elsewhere in eastern Ghouta.

According to Hanadi Shakr, “All of the medical and food aid that was brought in, it would just vanish, they would sell it and take the money. Everything went to the leaders of the terrorist factions.”

When eastern Ghouta was being liberated, corporate media was busy churning out fake reports of massacres, just as corporate media did when Aleppo was being liberated. They produced stories emanating from supporters of terrorist factions, always blaming the Syrian government for starvation, and above all, whitewashing the crimes and terrorism of extremist groups occupying eastern Ghouta.

In reality, Ghouta civilians had much to say about their captors’ crimes, and also about their relief at being liberated by the Syrian Army, but corporate media isn’t interested it doesn’t fit their regime-change narrative.

____
Eva Bartlett is a freelance journalist and rights activist with extensive experience in the Gaza Strip and Syria. Her writings can be found on her blog, In Gaza.